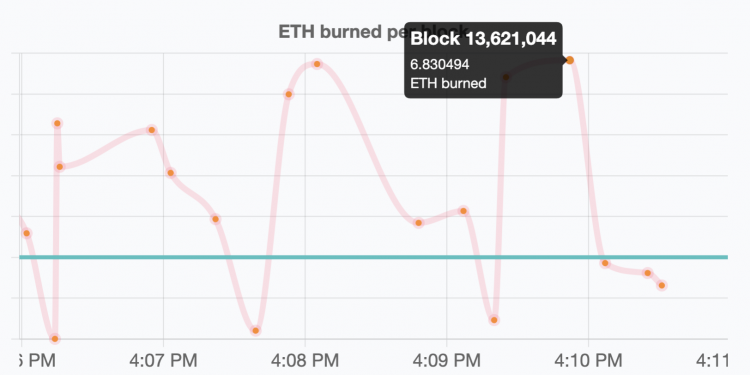 Close to one million eth has been taken out of circulation in just three months, far surpassing our initial estimate of $1 billion burned per quarter.

895,927.70 eth has been burned as of writing, worth $4.2 billion at the current price with this running at about 1% of the total supply burned per quarter.

More than 700 eth has been burned in the past hour, amounting to a $3.3 million reduction of supply in just an hour.

The burning is currently being led by Uniswap, significantly overtaking Opensea in a reversal of sorts where Uni now handles more than twice the burn volumes of Opensea.

The huge run-up in Shiba Inu can also be seen here as this ethereum based token shows its increased activity in the past month by burning more than Sushi or the 1inch decentralized exchange.

StrongBlock is new to us. They are seemingly trying to become Infura, but reward users for running a node. How? Presumably from getting stake on things like Polygon. They say:

“StrongBlock is the first and only multi-chain Nodes-as-a-Service platform to reward nodes for supporting their blockchain infrastructure. The STRONG protocol and node reward mechanism, integrated with NFT tokens, lays the foundation for stronger, more secure, and economically sound blockchain networks.”

On daily, ENS ranks following their airdrop, while Paraswap ranks on hourly after they too airdropped today.

Meaning that any and all activity on ethereum translates to some eth being taken out of circulation, reducing supply. If all else stays equal, such reduction in supply translates to effectively an increase in demand.

That’s to the tune of $4 billion for the quarter, 4x previous estimates, but naturally this is variable as it depends on network demand for ethereum.

This quarter it has clearly been very strong, with it to be seen whether that continues for the next three months as ethereum grows in usage.