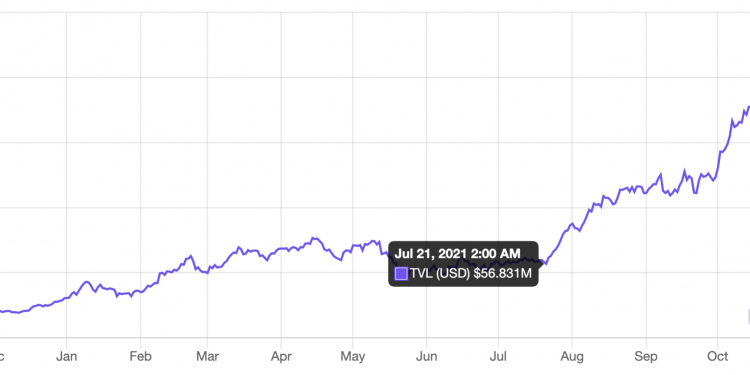 Bitcoin’s second layer solution, the Lightning Network (LN), has increased by 4x the amount it holds in just four months, coinciding with El Salvador’s declaration of bitcoin as legal tender.

There were $50 million worth of bitcoin in July. Now that’s up above $200 million, a more than 10x increase since November last year.

Much of the gains began in July when El Salvador announced intentions to declare bitcoin as an official currency alongside the dollar, with LN amounts doubling in September when it became official.

From this we can discern that between $100 million and $150 million worth of bitcoin is now circulating in El Salvador.

The country quite interestingly has just $1.5 million in M0 supply, that’s base or reserve money that for the public comes in the form of actual cash, a sum that has hugely dropped from $384 million in January 2021.

They now thus have 10x more digital cash than actual reserve money, with their M1, which includes bank deposits, being more than $4 billion. Making the bitcoin holdings about 5% of their broader narrow money.

El Salvadorians however do not necessarily have to use the Lightning Network. That can come handy for payments, but not if you want to save in bitcoin. In which case you’d just keep the coins on-chain.

As thus it is unknown just how much bitcoin there is in the country exactly, but their economy is up 24% in the last quarter.

That may be a bounce as many economies have seen following the artificial contraction last year, but we may also be seeing an introduction of liquidity in the system with it perhaps better established in the coming quarters just how that might be affecting the economy.

Beyond El Salvador, the Lightning Network has seen some improvements which may have contributed to its growth with the recent bitcoin upgrade allowing for further potential efficiencies.

Yet its adoption lags considerably things like tokenized bitcoin, wBTC, which has now topped $14 billion.