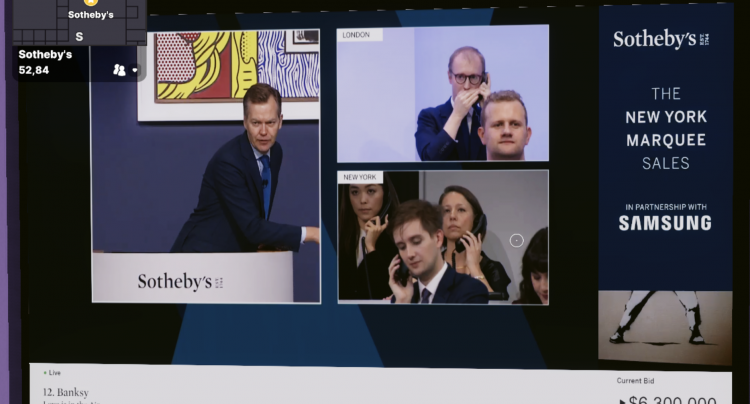 Sotheby’s, one of the world’s largest brokers of fine and decorative art, jewellery, and collectibles, has made a bit of history in being the first to hold a live auction in eth.

The auction was beamed to the Decentraland metaverse where they have a gallery with it packed during the event as avatars pushed against each other to get a glimpse of the live events in New York.

A British accent, after going through numerous auctions in dollars as usual, finally got to the two Banksy pieces that were priced in eth.

The more iconic one is Love is in the Air, the rebel throwing flowers in a protest. This started off at 898 eth without a mention of the dollar value. Then moved quickly to 923, 948 eth, 973 with the auctioneer then starting to switch between eth and dollars.

The auction got competitive with the featured image above grabbing a glimpse of it that can be viewed fully in the above video.

At one point there was one bid in eth, while until then it was mostly in usd, with the auctioneer briefly pausing for a conversion that didn’t give a round usd number.

The primary currency was in dollars however. It sold for $6.8 million, or 1,696 eth. That eth currently is worth more than $7 million, but the bidder will pay $6.8 million, although the site now says $8 million for some reason, presumably fees additions.

Only the Banksy pieces were in eth, two of them, but the eth currency was shown for all pieces alongside GBP and other foreign currencies.

This is presumably Banksy’s way of showing some appreciation for eth and the wider crypto movement, including NFTs.

He hasn’t dropped one yet of the latter, graffiti it somewhere on the metaverse, as the art world somewhat enthusiastically adopts new tech.

The metaverse aspect of it was the more interesting part here, bringing to the forefront the new and the old while opening the imagination to what the new can be.

There was no poap. By Sotheby’s would have been cool, but this is still the traditional auctioneer, not quite fully hip.

We saw landline phones again after a very long time, bringing to the front a different century as it was the last one.

While we were in avatars, in 3d, watching a 2d video, showing in some ways the current limitations but also what needs to be done to get rid of them.

On that front Meta, and presumably other entities, are working on the hardware needed to make interactions in the metaverse 3d as well.

That’s not quite here, and so we couldn’t get that hillbilly British going avatar when it gotten heated up with other avatars jumping up and down like monkeys in an unruly dawn of a new world.

But we will soon. Now it’s the transition where the metaverse is concerned, it’s the experimentation, back to paper scanning and putting it up on a domain to call it a website, just as eth gets out of that stage with its many native things.

The metaverse will native too. Banksy, or his younger self, will be able to go to a wall and actual graffiti in the metaverse to create a very native digital piece of art that you can copy and screenshot as you can these cardboard jpegs, but it’s not the original.

And we value originality because that’s creation. We value it in fact to the tune of $43 million for a piece of paper, the US constitution.

A whole DAO was created for ethereans to bid on it so that the DAO can have ownership of some much reproduced, both in print and digital, set of words. They lost the bid by about $3 million.

The NFT space is further developing however to now also become a way of funding startups, in this case startups focusing on art, music, even film, or gaming.

NFT collections come with all sorts of promises, while also not promising anything. Don’t tell SEC though, because if you do, we’ll firewall USA in the NFT space too.

Because this debate is also over. We saw what ICOs have done. They gave us Binance, they gave us Crypto.com, and they gave us a lot of things that have and are creating value.

They also gave us a lot of nothing, but that’s why you make small bets over many projects because at the dawn no one knows what is Pet Shop and what is Amazon even if that Pet Shop really looks like Amazon.

So what is happening here in some ways is the bringing of investment liberalization, and the tearing down of internal capital controls, to the art world.

An art world that is welcoming us, and even with some enthusiasm. In turn we get indi parties and indi art, with it anyone’s guess what second and third order effects that will have.