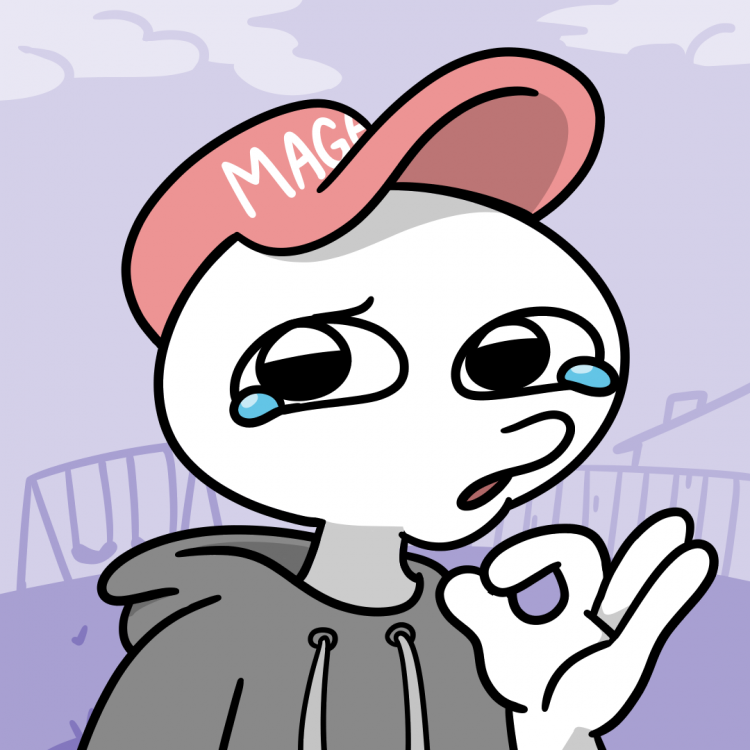 An NFT collection by an alleged alt-right white supremacist holocaust denying anti-semetic and racist fascist, the anonymous StoneToss, has been removed by OpenSea, the biggest marketplace for Non-Fungible Tokens (NFTs).

“It might be that a mass of whining triggered an automatic response,” StoneToss said after suggesting they could form their own marketplace.

OpenSea has not made any public comments on the matter. Rarible also initially removed the collection, but then reinstated it.

Toss and others are thus free to create their own website that reflects the blockchain, with the blockchain in this case or IPFS being more a protocol upon which all else runs, like TCP/IP for the internet.

OpenSea also doesn’t have a token, so it’s a company decision regarding what to show. Rarible does have a token, but there was no vote on the matter.

The offending bit here is the confederate flag, which is shown on some of the NFTs in this collection. In isolation if it was part of some flags collection, with a number of other flags shown here, it might have not been so offensive but considering the author, it becomes very political.

The confederate flag represented the side that defended the use of slavery during the American Civil War in the 1860s. It has racist connotations in the United States therefore, with some suggesting here it is used as a whistle of sorts to racists.

That brings to the frontier in this space, NFTs, those difficult judgment calls that other tech companies have had to make, with this collection selling out in 22 minutes for about $2 million worth of eth.

On one side, propaganda works especially when that propaganda is used to dehumanize. Ugly propaganda can get very dangerous, and potentially even existentially so because US did have a whole Civil War.

Censorship also does work. In this case it isn’t quite censored, it is on the blockchain, but OpenSea users don’t have to casually be confronted with the ugly politics here. They lost the war and so too the debate, so why give them a platform?

On the other hand, does censorship work merely temporarily? Would have we collectively so quickly realized that these guys are actually racist and it wasn’t a joke, as we did realize in 2018-19 when they thought they had won and flaunted such racism to the point they began casually saying everybody is a nazi now, an actual one.

That was the peak with public opinion quickly beginning to turn against them thereafter. The rise of authoritarianism so was followed by its downfall, with Trump out, Netanyahu, Salvini in Italy, Orban might lose. Le Pen is still trying in what politically is becoming an ugly France and out of sync, but it might be just that they’re a few years behind.

The poor people of Russia to their credit have been trying for two decades, but the master of propaganda now distracts them with sending refugees to Europe through Belarus as he exploits the opportunity of an in-transition Germany in a vein attempt to re-ignite the fluke of the rise of authoritarianism that was caused by a desire to end the war, at almost any cost. The same desire that gave Putin cover, but now he has none in Europe with Secretary of State Baerbock coming, so he better know what he is doing with his 20th century backwardness.

Debate works and the risk with censorship is that the needed debate is unnecessarily prolonged with potentially bad consequences, in this case contained in that dictum that those who do not know history are doomed to repeat it.

Toss for example is accused of holocaust denial because in one of his cartoons he said it was probably more the case that the supply lines disruption at the end while losing the war led to a liquidation of prisoners whom the nazis could not carry with them in their retreat. Unfortunately for him there are maps showing concentration camps and extermination camps. There’s a difference between the two.

There’s a nuanced and sophisticated point to be made however, which these people fail to do over and over again, so making that censorship option so appealing. They failed when in their backlash against terrist they conflated them with an argument against immigrants in general more recently, and 70 years ago they failed when they conflated ordinary mothers and fathers that happen to be jewish, with powerful people that happen to be jewish. That’s a mistake of general categorization, better known as racism or anti-semitism, and it’s wrong because from flowers come thorns and from thorns come flowers.

But some of their points have appeal because in the case of the holocaust, it is political. Not that it happened, but the whole ritual and prominence of the remembrance is in some ways a glorification of war, which is also remembered during the process, and a glorification of victimhood due to how it is singled out in prominence. The one dimensional focus also ignore many other atrocities. Whole cities were erased in Japan. Dresden and many German cities were razed to the ground.

At some point you have to ask when do you move on from these prominent imposing rituals, including the remembrance of the Great War or World War One in Britain that comes with effectively mandatory poppies.

Not least because there are subjects of victimhood currently, not in the past. The Israeli police handcuffs literal children in Palestine. Where is their remembrance?

In addition keeping it as a contemporary matter with these very prominent rituals, instead of an historic matter, might have cultural effects. A benign example might be Germany getting zero points when Eurovision was held in Israel in 2019. Maybe no one really liked the somewhat decent song, or is it really the case that after all the efforts Germany has undertaken to redeem itself, there’s still dislike? In addition what does keeping down Germany mean for Europe, and its interests, and on and on.

The censorship of open debate risks limiting potentially sophisticated arguments or reasonable arguments into extremist packages where the subtle politics of the holocaust in the present, turns into it didn’t happen at all which is offensive because there are living people that did suffer and badly.

In addition our society, or better this generation, needs a more sophisticated discourse to take back the narrative from the divisive rhetoric that is ultimately based on the tension between we are all equal and the fact we obviously aren’t.

Men can’t do milk, well a certain kind of milk. Some medical device called Oximeters is apparently affected by skin color. There are low IQ people and actual geniuses. We’re all equal before the law, all lives matter, and all deserve respect, but we are also all different and everyone is unique. Different is good, variety is not just good, but how we ensure our very survival as a species.

Embracing difference, embracing variety, under the dictum of all are equal before the law and deserve equal opportunity, is how liberalism addressed the tension and came to dominate and should keep dominating.

That doesn’t mean embracing racists, or even giving them a platform. They had the debate, they lost again as you’d expect, and as it happens their arguments are directly against such liberalism. They see differences as bad, they prefer everybody in the same dull uniform. They like the marching authoritarianism. If they had their way, high IQ would be bad too.

The question thus is not whether there should be open debate, but for how long should such debate continue? When do we say ok this is bad, and so end the debate.

For some people the answer is never. They laughed when they shouted not my president, we’d never do that, they said. But they did with their ‘stolen election,’ which amounts to pretty much the same thing.

In the end they too cried like women, and however much iconic this crying maga in our featured image may well be in symbolizing the once again defeat of nationalists and authoritarians by liberalism, it’s difficult to criticize a very hard decision either by OpenSea to not allow it or Rarible to allow it.

This space is politically neutral, so it should be seen to also appear as such. We have actual nazis bitcoiners and actual communist bitcoiners or cryptonians, and they can even try and speak on behalf of bitcoin since bitcoin is decentralized.

But the vast majority by far are probably independents with this paper itself backing Biden in the last election and Trump before him because his promise to end the war made the cost of his other views bearable under the expectation that the checks and balances would constrain him.

As a neutral space, platforms like OpenSea can’t afford to risk being seen as leaning either way. It would have been better if they had a token, and if the matter was put to a vote. You can say then capital would decide, but you’d think capital tends to follow reason or that capital won’t be maintained for much longer.

Under such due process with public legitimacy, the public might have a mechanism to formally end a debate that has ended. To let the maga cry in his own corner, and not go on about what the public has clearly rejected.

Not least because it’s time such ugly rhetoric on both sides with gender or race quotas, nationalism or racism, is given back to the 60s where it belongs or the 40s, so that we can tap into the meritocratic potential of any and everyone in our aim and ambition to bring capitalism to all and to conquer Mars while enjoying all the nice and liberalizing art and parties that are nowadays held in the metaverse, as we leave behind the chains of propaganda that we are now taking off, at least in this space.