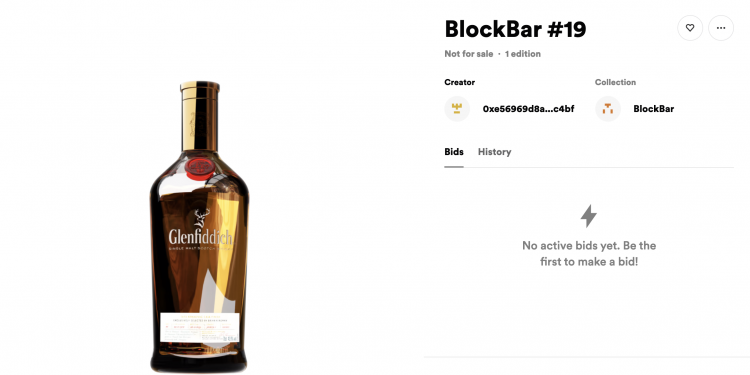 $288,000. That’s how much an ethereum address wants for the jpeg (pictured above) of a whisky bottle, a jpeg that also comes with the bottle itself, described as:

It was sold by an address called glenfiddichwhisky.eth. That address made a number of other similar transactions on the same day, presumably other sales.

What they sold was a BlockBar (BTL). The pictured one is number 19. There are 32 BTLs with 25 holders and 70 transfers. This guy got the pictured one. He gives us a boring front with a new address that says 4.8 eth were withdrawn from Coinbase and 4.7 eth was sent to Blockbar.

So he paid about $20,000 the site says, and now wants to insta 10x. Good luck. Opensea is currently down for some reason. Maybe 4chan ddosing them in protest for removing alt-right nfts. Rarible says there are no current bids on this NFT, but gives us previous history. Blockbar as it happens nicely gives us a lot more stats on their own marketplace:

This is an actual whisky bottle, represented by an actual NFT running on the biggest blockchain in the world for this sort of thing, ethereum.

The NFT is not just a jpeg, it’s an actual bottle stored in Singapore, insured, with proven authenticity that can all be tracked, they say:

“BlockBar works directly with the top distilleries and brands in the world. We work with the brands to help them mint their own NFTs of the bottles, this way you can track authenticity all the way to the brand itself.”

To get the actual bottle, you just go to the Collect section on their website, enter your shipping address, and you burn the NFT. Then they ship the bottle with insured mail and now you can drink the jpeg that isn’t no more.

You can also pay with a credit card for the bottle, skipping the whole NFT bit, but the NFTing of the high end spirits market is the most interesting part.

This market has seen significant gains of 582% in the last 10 years, outperforming stocks by 2x, but it’s difficult to tap into because it hasn’t been fully digitized.

With NFTs, you get to list them on the crypto market, a market bigger than Germany’s stock market cap at $2.45 trillion.

You can unlock greater liquidity therefore, investing in the asset while not having to deal with storage or much else. An asset that also has a somewhat stable value, and so potentially can act a bit like a normal token with a known market price, even though here that would be a bit more complex and difficult to pull off.

But unlike an art jpeg where the value ultimately is whatever someone wants to pay for it, a whisky NFT may be more acceptable as a collateral either in new defi projects or by more forward looking banks.

You can expand this concept to other assets. Housing in particular, but that would probably be more difficult to pull off unless you’re the company actually selling such houses. In which case like here, from your perspective, you’re just selling your asset but with an NFT to make it potentially more appealing to those that want to use it as investment, so potentially driving up sales.

Since this is an interaction between the physical world and digital, all the usual considerations that would apply in the physical world, would also apply here. Trust is required. In this case the company says they’re insured, but naturally you need some level of assurance that you will actually get the bottle, and not just a jpeg. That there won’t be a rug pull or scam exit.

That’s established as with anything else in the physical world. Brands in particular tend to court trust because they’ve been operating for long. One such wine brand just announced they’re partnering with Blockbar, so presumably this is all legit.

NFTs, The Crypto Amazon For Investments?

This isn’t the first attempt that something like this has been tried. “Whisky to ICO,” we said back in 2018. That however was more an ERC20 token with an enterprise to manage the whisky business. While here they’re just selling whisky, or wine soon, and you have the NFT to prove you bought it, like a receipt of sorts. A receipt that you can transfer to others, with it more like them paper stock certificates that prove ownership.

In addition since here there’s an interaction between the digital and physical, there might potentially be redress if the token is stolen. Now that would be a fairly complex matter, but if the NFT is stolen, you can go to Blockbar to halt the shipping of the bottle, so the thief just gets a click save as.

There would obviously have to be some process to establish that there was indeed a theft and it’s not you in fact who is the thief by trying to get the bottle after selling the NFT. Ultimately, it might even be a court matter.

It could also be a platform matter. Blockbar should be entitled to say that the NFT proves ownership and that’s that. Stolen or not, we’re blind and can only see the NFT, if presented, that’s that. Even in that case, however, the police should be able to get the shipping address, unless the thief passes the NFT on to other innocent buyers, in which case we might get back to more a crypto like token.

How it will al develop on that front remains to be seen, but on general execution it appears like this is something that could potentially work to open up that market for investment with the NFT here clearly adding something in providing liquid digital ownership of rare and consumable items.

Which could potentially mean crypto is getting its own Amazon, but for investments, with this potentially one area where further developments could make sense as it is addressing an obvious need in opening up an investment class in potentially a workable way.