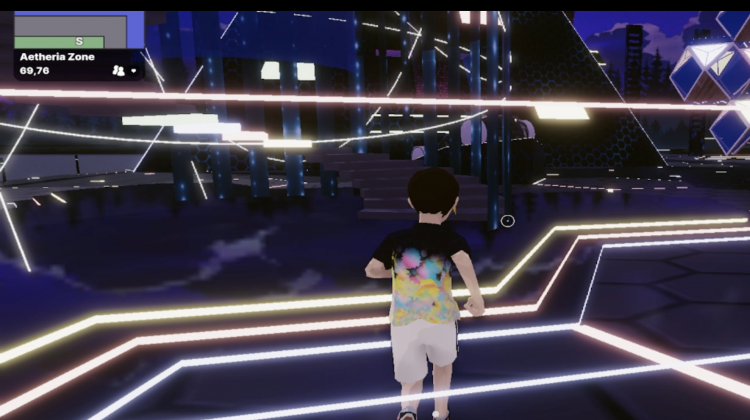 Decentraland, ethereum’s most developed metaverse where you can play games, throw events, or trade NFTs, has crossed a budget of $1 billion to invest on their platform.

“With $MANA now over $5, there is $1 billion available to build the decentralized metaverse,” Barry Silbert, an early backer of Decentraland, said after previously stating:

“The Decentraland DAO holds over 200 million $MANA… which will be used to improve the metaverse. The higher the $MANA price, the more resources are available to upgrade the metaverse. All decentralized.”

Facebook’s CEO Mark Zuckerberg recently announced a change to Meta and a $10 billion budget for the metaverse.

From their presentation it appears their focus is on hardware, the gear needed to bring natural movements to metaverse platforms.

Nvidia instead is seemingly focusing on software with their CEO Jensen Huang presenting Omniverse, a tool that can allow the metaverse builders to integrate their capabilities.

Huang said the 3d world will be much larger than the physical world. We’ll buy tools, cars, and other objects on the metaverse, with the more interesting part of his presentation being the industrial potential of the metaverse.

He spoke how a factory or a manufacturing plant can be turned 3d to optimize routing and other processes. How an entire city can be cloned 3d to manage traffic and much else.

The big question is who will be the platform? Where will all this be built? What will the hardware connect to?

That’s for the future to say as currently we’re at the inception stage. Decentraland in particular, created in an ICO in 2017, has gone through some very hard times, but they ploughed through it, they didn’t leave and they kept building.

Just a month ago their subreddit was similar to that of eth at the depth of the bear. All they could see was negatives, but they had managed to build a whole world.

$2.4 million for some pixels. That’s how much tokens.com, a publicly traded interesting company that defi-s and is now betting on the metaverse, paid for the Fashion Street Estate in Decentraland.

“The estate will be developed to facilitate fashion shows and commerce within the exploding digital fashion industry,” the company said in a statement.

A Gucci bag as an NFT investment may sound silly, and it perhaps is silly, unlike whisky NFTs. But wearing your over expensive sneakers or t-shirt digitally might just be a costless nice addition and in a few years people might feel entitled to it.

Costless in the grand scheme of things since these are digital items, but you have to pay 500 mana to mint a wearables collection currently, although that cost is the same for one wearable as for one million identical wearable NFTs.

The mana holders decide just how much that cost should be, with Decentraland being decentralized. That comes with problems. In particular one ‘room’ currently can’t hold more than about 50 people inside it at the same time.

The people or the avatars can be there, but the voice won’t function or the video won’t function, and that’s because the servers are decentralized as well and people have to run them.

That’s usually down to projects or maybe the DAO or both, but the depression they were in even while eth and the rest boomed, might have blinded them to the huge growth they have seen recently.

It used to be that there were hardly more than 100 people on all of Decentraland. Now at times there are 1,000 in just one room, and often there are 300 in the most used one, a mining game of sorts that gives you free wearables after much comet mining work.

In one engagement game last night, the presenter or organizer was a bit surprised by just how many people showed up, warning that there may be problems in regards to whether the room can handle it, and stating that “it looks like we need to expand.”

Decentraland plans to launch a desktop client and a mobile client. That can improve the experience significantly. It may also be that they were fine with the resources they had previously allocated to it, and never updated their awareness in light of the significant growth.

That’s because during the Metaverse Festival when they clearly had allocated more resources, the thing would work decently even with 500 people in one room.

These technical aspects therefore are probably being addressed, with Decentraland currently more a prototype at an exploration stage.

Some dismissively compare it to Second Life. In that case, if it is like Second Life then we would say it’s a capitalist one.

Second life was communistic in design in that no one quite had much of an incentive to do much there because all the content is given for free and the content producer gets pretty much nothing out of it save recognition.

Decentraland has a profit motive. Tokens.com is not going to put up fashion shows just because they’re creative types and want to express themselves. They’re gone do so to sell you that fashion they’re showing, either purely digital wearables as it may be, or both digital NFTs and the physical good redeemable for such NFTs.

Obviously you might not want to buy it, but the show will be created and perhaps will keep being created for the same reason we have fashion shows in the physical world. There’s money to be made out of it, potentially.

So we have a whole capitalistic economy with a real time element that removes copy pasting. Currently this economy is very much in its infancy and minuscule, about $1 million a day, but it might have potential.

Its chief distinction, in our view, from the wider web 2.0 economy, is discovery. Browsing on the web doesn’t quite exist anymore. All starts with a search or with others sharing, and that means you have to know what you want or you’re at the mercy of what others want. You can still stumble on things, but you can’t quite go on a day out on web 2.0.

On Decentraland you can go on a day out even now. There’s events, you can see what others are doing. But there isn’t really commerce in the way there could potentially be or one can imagine.

There isn’t a bookstore, for example. Why do they even still exist? Browsing, primarily, the chance to feel and touch the books and see what’s around, the chance to discover what you didn’t know you want. This can very easily be recreated on Decentraland. You can limit the book browsing pages, maybe unless they buy the book NFT, and you can give them the physical copy as well, why not, if they want to redeem the NFT.

This sounds in some ways like small things, but in some other ways it is revolutionary, or rather counter-revolutionary, in that it brings back the individual.

The 90s, we have glorified them and even mythicized them for a reason. Some ask were the 90s really good, something that is far less relevant than what we want to think the 90s were.

The chief idea being we want a government that doesn’t have an enemy, either another state, or some group like terrists, or nowadays some flu that keeps us still at ‘war’ with the air even though the vast majority are vaccinated, but Newsnight still calls protesters against compulsory vaccination of all in Austria, as some sort of haters or conspiracy nuts or extremists, even though they’re facing lockdown forever with it very unclear whether the government now wants to fight the flue itself since it is the flue season.

It was only for about ten years during the 90s when we had that period of the government not having an enemy, not using an enemy as an excuse to authoritarianism and make us shut up while themselves swimming in corruption and abuse of power to our detriment.

The other part of the 90s is the early internet. It was very different. It was organic, uncontrolled, uncurated except for the really bad things that people don’t want. You could surf back then. A browser was actually for browsing. You could discover things and corporations had not quite yet arrived.

Nowadays the internet is communistic in that we give free content for nothing in return on public platforms, and worse those public platforms are controlled by a handful of corporations. The freely shared content suffers from the same thing that communism suffers, the lack of proper incentive.

That’s unless you’re a political party or a brand engaging in effectively marketing by either coopting or pretending you’re just another user. R/worldnews is a great example of just how sterile the shared content has become.

There’s just no incentive to share good content in general, while the moderators probably do have an incentive. Either for what people might consider good things, pushing climate change on everyone’s faces constantly, or bad things in pushing nationalism or identity politics or keeping out optimistic topics and so on.

Creativity is dead because web 2.0 is communist and there is no longer the ability to browse, something at the root of individualism and independent identity.

If all you know is what you are being told in a mass media manner, then you don’t know anything except for what some special interests want you to know.

If instead you gain knowledge by stumbling on a book or event or a clothes shop, you’re no longer the ‘mass,’ but the individual as although others may have stumbled there too, there are far more things one can stumble to by browsing then by mass sharing that is usually from special interests because others don’t have the incentive to freely share things.

So Decentraland and the wider metaverse in its current form is more what could be, than what is because it’s very, very new, barely months old.

What Decentraland in particular could be is up to everyone. It’s an open space. You could even fork it, although we haven’t seen it in action, with it currently describable as a new city under heavy development.

With a $1 billion war chest and a head start, it could even be at least a contender to become a prominent metaverse platform that lets us see and build just whatever we want it to be, the crypto economy, or plaza, or even the citadel they told us about.