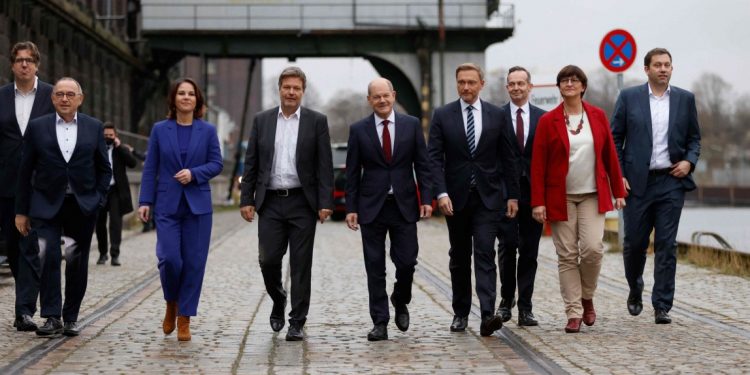 The incoming new government in Germany is the first in history to explicitly mention crypto and blockchain in their coalition agreement and governing program.

In the first peaceful transition of power in 15 years, digitization, legalizing weed, renewable energy, a united Europe and much else is on the cards for an optimistic Germany.

A Germany that is now to be ruled by the Social Democrats (red), the Free Democrats (yellow) and the Greens.

Olaf Scholz, the guy in the middle with the red tie, better known as the elf to us because he looks like one, is to become what in Germany they call chancellor, in Britain they call Prime Minister, and in USA they call the president, the guy in charge basically.

To the left we have the two Green Party co-leaders. Robert Habeck is getting the Ministry of the Economy, while Annalena Baerbock will be the foreign minister, or Secretary of State as they call it in US.

On the right the blond guy of yellow, Christian Lindner, will be the Finance Minister, or chancellor as they call them in Britain, or Treasury Secretary in US.

The people of Germany thus have seemingly returned a government that has something for everyone, both hip and fiscal, a bit of red, but with a lot of free market. Some ree at Russia and China, but with adults in the room.

After the January debacle in US, the world will see ahead of Christmas, with jealousy, envy, love, or fear in some authoritarians, how we do things here in Europe.

There won’t be the pomp and circumstances of kneeling to the Queen as in Britain, or the swearing on the bible as in USA, but they will meet the president and then give a speech.

We’re free to imagine some Madonna concert. Maybe that yellow guy or that green lady can even beam their speech to the Decentraland metaverse, but the greatest ceremony is of course that sacred peaceful transition of power that says goodbye to a generation and hello to a new one.

In their 177 pages document presented only in German, red, green and yellow say this of cryptos and the blockchain according to our translation:

“We need a new dynamic in relation to the opportunities and risks from new financial innovations, crypto assets and business models.

We advocate a level playing field with equal competitive conditions within the EU, between traditional and innovative business models and towards large digital companies.

We are making European financial market supervisory law fit for digitization and for complex group structures in order to ensure holistic and risk-adequate supervision of new business models.

The EU supervisory authority should not only take care of the traditional financial sector, but also prevent the misuse of crypto values for money laundering and terrorist financing…

In the land register, a summons address becomes mandatory in the event of changes. We are commissioning a feasibility study to investigate whether a land register on the blockchain is possible and is beneficial.”

Such few words, and yet anything you want can be read. Overall, we have yellow in the appropriate position, so we are very tempted to suggest we have decisively just won Europe.

Their suggestion of euro wide supervision is an indication they might use cryptos to consolidate the financial single market. There’s a lot of work to be done here to compete with US markets, and with some wit, they could move towards re-invigorating investments and the capital in capitalism.

That’s presumably what they hint with “new dynamics” or “complex structures,” DAOs (?). They want to update old laws and processes to accommodate cryptos, perhaps continuing Germany’s work on e-stocks and the like.

This plays to a wider theme as their focus on digitization brings aspirations of a Europe more focused on the future. On that front a lot is happening in Germany, from flying cars or air taxis, to hydro power, to their coding scene that runs more bitcoin nodes than even USA.

With a government focused on that ambition to effectively upgrade, Germans and the wider Europe probably have a lot to be proud of today.

For it’s a new dawn, and a sign that this generation is now starting to set the rules and the tone which can be summarized thus: peace and prosperity at almost any cost.