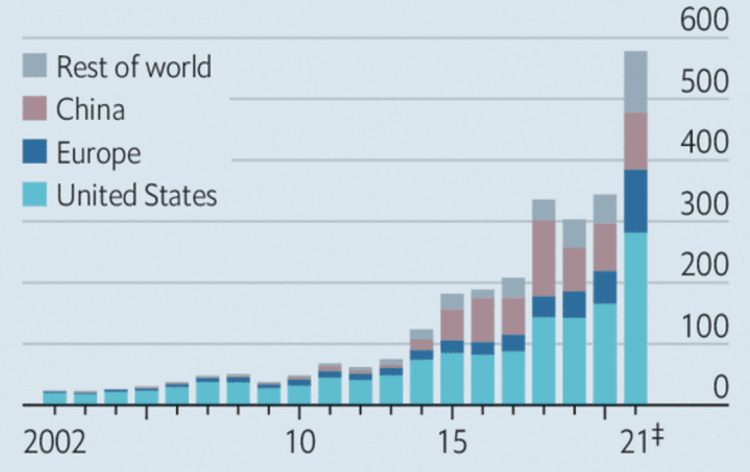 More than $580 billion has been invested in startups and other private companies this year by Venture Capital (VC) firms according to PitchBook data.

Europe in particular has seen a jump in VC investments from 10% of global VC funding to 18% as startup investments move to other industries beyond tech.

From solar to gene editing, space rockets to flying cars, new industries are being created and old ones face disruption.

The VC model however limits such investments to those that can put down a minimum of $5 million, a sum affordable only by the very rich.

Such prohibition for the rest is by the force of the law, the Securities Act 1933, which bars the public from funding innovative new companies unless they are very rich.

In the digital realm, this prohibition is largely being overturned. As an example, unicorns like Binance, Crypto.com or Decentraland, were funded by the crypto public in 2017 and now are a success story.

With NFTs, this liberalization of investments is being brought to the art world and entertainment as well as gaming, a fairly high risk industry.

There are glimpses of how it could potentially develop more widely with NFT-ed whisky providing one direction on how more physical endeavors can be liberalized.

Yet some industries remain chained to the will of the very rich during the formative stage, with the public having a say only after such companies are already giants and trade on stock exchanges.

The VC model however is a step towards the liberalization of investments itself as the upper middle class can also pull capital to participate in the economy, but it remains very difficult to access and it tends to focus on creating monopolies.

Despite such shortcomings, they’re growing significantly, suggesting there is a huge public appetite to engage in private company investments, not least because that’s where there’s most growth.