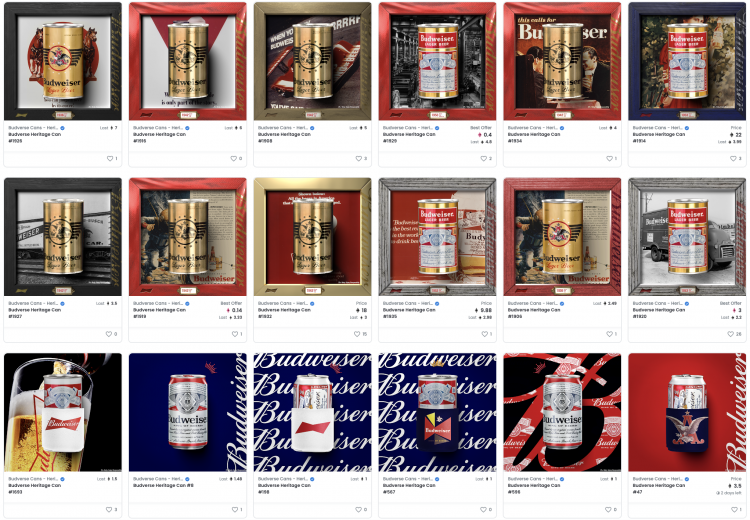 Budweiser, America’s biggest brewer has raised $1 million from a sold out collection of 1936 beer can NFTs launched on the ethereum blockchain. The company says:

“Budverse Cans Heritage Edition. Composed of 1,936 unique digital cans, representing 1936, the year of the first Budweiser can, each NFT is one of a kind and generated using archived photos, ads and designs from throughout Budweiser’s storied history.

Each NFT will act as an entry key to the Budverse, unlocking exclusive benefits, rewards and surprises for all 21+ (or legal drinking age) NFT holders.”

They don’t provide any further details on this Budverse with 36 core NFTs of a gold edition that give you a VIP ticket initially sold by the company for a flat $999.

Some that bought them have 32x-ed their investment already with one such can NFT selling on the secondary market for 7 eth, worth $32,000.

Budweiser also bought beer.eth for 30 eth, worth $140,000 currently, as this giant clearly experiments with new ways to attract a new audience or retain the one it has.

That’s after Stella Artois put up ads on Zed Run digital horse races in the metaverse with Budweiser going a lot further to implement what is in some ways a new business model or outreach method.

Down to the Metaverse

What we see above is a typical approach in new NFT collections. You have some jpegs, some rare some more common, with the minter (buyer) usually not knowing what they’re getting exactly.

Usually these are sold for eth, so the project on the other side gets funds with it usually stating prior to the sale what those funds will be used for.

In this case it’s a Budverse, that means something to do with the metaverse, but we don’t know what exactly.

So the speculative element is build within the whole design of the process. We don’t know what we get exactly, there’s a lotto element in that we might get the rare one though chances are you’ll get the ‘floor,’ the most common one. And we don’t know what the execution will be exactly in regards to whatever they say they will do with the funds.

To address the latter, often some NFTs from the collection are held by the project. The initial raise thus is small, with it usually $1-$3 million. The hope is that the execution will increase the value of the NFTs sold on the second market by magnitudes. And thus the real raise is by the sale of the retained NFT on the second market with the initial mint being not quite an airdrop, but a subsidized sale for projects that do then satisfactorily execute. The risk is thus high, but also the potential reward, as for many projects the initial mint may well be just a very expensive and perhaps an even useless NFT.

Budverse, Budweiser in the metaverse. What will they do there? They could just put up a gallery there to show off these NFTs and then maybe hold some events. Music, but they could also beem the quarterly earnings calls.

The latter are usually difficult to get a hold of, so some investors may well consider this NFT just a cost.

They could instead have an actual shop where they showcase their cooler beers, and maybe even normie ones we have in the corner shops, and you can actually buy it.

Or they can do all of the above, which is probable, and maybe even surprise us but we can’t see how, which is maybe what surprise means.

So it’s not a wow, but in our view the whole metaverse is not quite a wow. It’s not a complete revolution like the internet was to paper and communication more widely. It’s more what the fax machine was to the telegram. An improvement and better, but still within the same dimensions if you like.

It can also be seen as what the smartphone was to the internet, though a bit more so we prefer fax to telegram because the smart phone did not change the internet itself, it just provided a new way to access it.

You might say a Budweiser metaverse shop doesn’t change the internet either because they have a 2d shop, but it is a bit more than a new way of access because you can be exposed to what you don’t know you want in a natural way.

This may be sufficient where commerce is concerned with Budweiser now perhaps the most famous one, but on Decentraland there’s a whole long high street of shops after shops by big name brands.

That high street is currently empty. There’s little to nothing in them shops, except the brand names, but it will be populated and then we can experience what arguably is one of the lowest hanging fruit, an actual physical shop, but digitally.

That’s potentially quite something. Not revolutionary but imagine we can go to the Shenzhen market and see it all in 3d, instead of in one way videos, and actually order whatever they displaying.

Something that might make less sense due to less direct profit motives is imagine you can walk into Apple’s HQ and perhaps even talk to people there while seeing the whole environment.

Something that would definitely make sense is the industry expos. They’re generally concentrated in the capital and even for those living say in London, they are quite far. They can be replicated on the metaverse, and then they’re at your finger tips. All the businesses and whatever innovation or service they boasting about or just offering.

Lilium and Joby, not just showing us their jets, but letting us fly them in a realistic manner, and perhaps even giving us some details we can actually ‘touch,’ the engine or whatever. Investors would probably want to go and see that sort of thing.

It might be nothing or it might be a new way of reaching potential customers, and since the costs are minuscule in the grand scheme of things, why wouldn’t you want this nice metaverse outlet and see at ground zero just what is, what isn’t, and what should be.