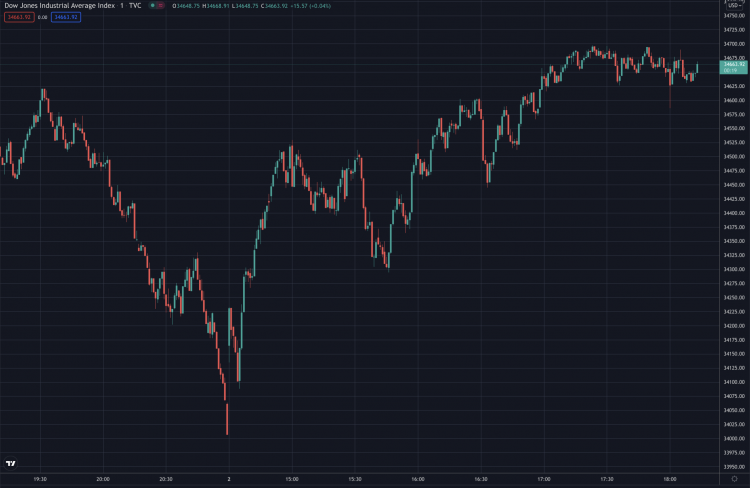 The Dow Jones is up 1.9% at the time of writing after some volatility following news that Germany is to impose a lockdown, but ostensibly only for the unvaccinated.

“The fourth wave must be broken and this has not yet been achieved,” said Angela Merkel, who is to resign next week after 15 years of ruling Europe’s richest country.

Nina Hagen is to sing today at her farewell. Showing just what different age Merkel grew up in, Hagen is to smooth her ears with such lyrics as “now no-one will believe us, how beautiful it was here, haha, haha.” That being “an apparent reference to the colourless old communist East Germany,” says the BBC.

The 63 year old Olaf Scholz of the Social Democratic Party is now to take over, a party that needed two other ones, yellow and green, to take power.

It’s not clear whether he consulted with them before telling the world Germany, the land of Hitler, is to impose forced vaccination on its entire population starting at the peak of winter this February just days after riots lit up Austria.

Vaccine here being a very specific legal definition because Merkel said “vaccinated people will lose their vaccination status nine months after getting their last shot.”

So you gotta keep up with the program, with the boosters, and they’re picking on the most vulnerable: children gotta mask up in class now. No smiles for the little ones.

Those unvaccinated, or whose vaccination is nine months old, can not go to “non-essential” shops or premisses and can not meet more than two people from a different household.

How you enforce the latter is anyone’s guess, but the former means anyone who wants to get a haircut needs to show ID and proof of nine months young boosters which also means carrying an ID becomes mandatory and mass surveillance gains a new level since that would of course allow them to graph every single thing, including what exactly you ate for breakfast this morning or whether you skipped it.

So there isn’t quite a division between vaxed and unvaxxed, there is instead a wholistic system for both that two years on moves from two weeks to flatten the curve to we can tell you what to have for breakfast.

The ugly beauty of this is that courts in Germany last year said lockdowns are unconstitutional especially where it concerns the freedom to protest, but it’s not too clear whether the government is just ignoring the courts.

They just forgave fines, and then came back for more lockdown, in an imposition that is obviously called slowly boiling the frog.

That’s especially as the Nu variant in question turned out to be mild and a cause for hopium, but of course to our overlords hopium is the worst thing in existence, so it “must be broken and this has not yet been achieved.”

A highly contagious deadly virus requires utmost precision in isolating infected individuals in an imposing manner that takes zero chances, and that at the very minimum requires having these individuals in a special quarantined hospital.

Our overlords instead went to China at its peak, and brought those people here, many of them infected. In the process, the government itself was the chief agent in spreading it.

Despite taking the extreme act of imposing on all what is reserved for prisoners, a lockdown, our governments bothered not even in the slightest to isolate those sick with this, from hospitals that serve the general public.

In what serious contagious virus do you send those infected where the most vulnerable and already sick patience are, in a general hospital, a space where they can’t even move out if they want to. To say nothing of the obviously untrained general nurses and doctors who usually don’t operate with highly infectious diseases.

They even put up such hospitals, and then left them empty, at the peak. Why? Because they want us to take it seriously, not themselves. Which means just as the ‘stolen election’ show, this too has ‘fakeness for a TV show’ written all over it.

The latest is the party at Dawning Street last Christmas. That was at the same time as Boris Johnson was hitting his fists against the table while threatening the public. You lockdown prisoners, the Prime Minister is for locking.

And the big question is why? Why was the public ignored when it covered the streets against the Iraq War and the breach of principle it entailed in 2003? Why did they even dare tell that same public that most of them support that war which all were angry about, just as now they tell this angry public that polls actually show we support the destruction of our liberties.

Is this the same poll as Brexit or Trump or what poll is it? The one that had Hillary Clinton at a 99% chance of winning the election?

The reason is simple. To the above meme some say Florida is hot, and therefore they riding it out. But Sweden is cold, while India is hot too. However the latter had farmers protesting on the streets, so hotness no longer mattered to a sudden massive spike in the public being ‘informed’ that old age does what it always has done.

And let us not forget what they said during those two weeks. Can’t lockdown for only the old and most vulnerable to this, because what society does that create where they stay indoors while the rest go party.

Can however clearly apartheid the nine monthers, and those who maybe think or want to take the chances with the suggestion that natural immunity may well protect them from worse things, especially if they’re young and have half a century to look forward to in the age of gain of functions.

Who is to claim science knows all, especially when true science is rarely in charge of public control? Is there a Galileo in our collective memory? Or do we again have to face 2,000 years of oppression from Pythagors time to that of Coppernicus?

In the face of uncertainty, you do variety. This attempt to fight nature itself, thus, will pay its dues in history, just as Labour paid theirs for the Iraq War.

What exactly are the vaxed scared of that they need surveillance the moment they walk out the door while their government does not even do the basic of treating infected people in isolated and quarantined hospitals with fully geared nurses and doctors?

In what society do they comply with government impositions in minute details of ones very existence, especially when that government itself does not take the most basic precautions, but is so very keen to Hitler.

Well, if stocks and crypto markets are saying anything, they’re saying not in this society. They dismissing Merkel, who presided over a decade of stagnation in Europe and now puts up a hymn to communism, as a lame duck using a loophole in her last days to show her true face.

Christian Lindner of yellow will cut off the head of the elf (Scholz), politically speaking, if he so pleases and he might please if the donkey becomes unpalpable as he might do because the public is not with this, the public does not fear this, the public now fears the government, and fear leads to anger.

In the United States, where they enjoy the right to arms and thus a practical not just a legal right to protest, the Democrats must be fearing a revolution at the ballot boxes in this mid-terms that would dwarf Trump.

You’d think thus it is very unlikely they would even make this a matter of debate with the English speaking press already keen to brush it all under the carpet.

The Germans however clearly haven’t gotten the memo, but Scholz needs to be very careful when he considers what the public actually thinks because riots in little Austria can be ignored, in Germany?

So no one can hear their tune anymore, and we did only because ‘first they came for and no one spoke up.’ So we’re speaking.