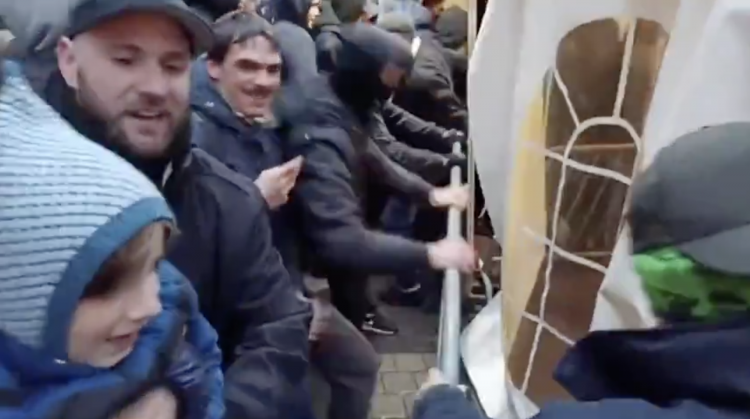 Liberte, liberte, liberte! shouts the crowd in Luxembourg as it brings down the barriers of a checkpoint for vaccine passports in front of their Christmas market.

After waving the barriers to and fro, with those on the other side shouting no, the buzzing crowd salmoning shoulder to shoulder finally gets some breathing space.

Liberte for Austria shouted the French, with their hymn of revolution, which is now their national anthem, so becoming the cry across the continent.

Riots broke out in Netherlands last month. This month Brussels burns as the world is introduced to young men flying in the air while being water cannoned.

Belgians are being curfewed after 5PM. Children as young as six have to wear masks in school for eight hours. Their education is also being cut short by a week, with work at home orders now back for this vaccinated population.

In Vienna, tens of thousands protest again, in almost a routine of sorts as the unheard public anger risks hardening in a continent that shivers at the sight of papers please.

Silence in Germany. Presumably because they’re waiting for the new government while hoping it will roll back Merkel’s draconian imposition of selective restrictions.

The imposition of routine vaccination on the entire population comes with obvious dangers for while initially there may be great scrutiny, the barriers will lower with the routine, making scandals inevitable though probably much after the fact.

This will also impose a wholistic new system, for both vaxed and unvaxxed, of paper checks the moment one walks out of the door, making the carrying of an ID compulsory.

The amount of information this provides in a centralized government controlled database rivals any in history, with it anyone’s guess how it may be abused as often has been abused throughout history.

In some countries, special prisons are now on the cards for those unvaccinated, despite now two years on there still not being any special hospitals for those with the new flu.

And it is a flu. It was new two years ago, making it worse than an ordinary flu, but it is still a flu. That means it spreads too quickly, and because of that it mutates too quickly too.

As such, there are no vaccines as we usually know them. There are seasonal shots that have to be taken every winter to address the new variant.

They tend to be effective for the flu, so they’re generally effective for this too. But just as with ordinary flu, which mysteriously has disappeared nowadays even though most of us have gotten a cold or flu these past two years more than any other, we most likely can’t beat this one either like we can other viruses which have an effective vaccine.

That makes all this a public policy matter rather than exclusively a healthcare matter, and a very political debate that has to be within the constrains of fundamental human rights at this stage, rather than an emergency where lines can be blurred.

Polls as such or general public opinion are thus no basis for decisions where it concerns fundamental hard won rights, because those rights are a fundamental check and balance on the madness of the masses.

Hence one million people protested in Australia where lockdowns were first imposed this season. Yet this unfakable public opinion is seemingly being dismissed entirely, which should be a great cause of concern because the public is ultimately the sovereign.

For now however we appear to have a divide between continental Europe and US-UK. But less in UK where in Northern Ireland people took to the street in Belfast this Sunday after the introduction of vax ID cards.

Haringey MP Catherine West joined a protest in London organized by a travel agent against the re-introduction of pre-departure testing for those that are entering UK.

The requirement used to be isolation and then you test in UK. Now if you’re in some poor country where they don’t really have such tests, then you may be stuck. Or if you happen to get it while abroad, then you might be left homeless as the hotel might already be booked. So you have no where to stay.

This also affects a very big fundamental right, the right to enter your own country. That especially applies if these people are in a poor country where healthcare might be atrocious, and they might be there on business or charity or for whatever reason.

The suggestion for now however is that Boris Johnson is focusing on the solution to this as that of treatment and vaccine protection, but he has not ruled out further restrictions even though there would be no way out of them now that the population is vaccinated. So it’s not clear how the public can accept it as it would be a permanent imposition.

In US, the right to bear arms has also given them the right to debate, unlike in UK where Labour is completely failing at in any way being an opposition despite now loud rumors of profit orientated big pharma making so much money and stands to make a lot more to the point one should expect they have a very big hand in these compulsions.

Since there is a proper opposition in US ready to govern, Joe Biden and democrats more widely are probably worried how any action they might take would affect the mid-term elections.

They haven’t thus taken any action so far because regardless of what any poll or easily manipulated social media corners might say, the public is very much against any restrictions at this stage because there is no longer a way out.

The public is instead a lot more worried about their job, about having to give away even more of their paycheck so that other able and healthy people don’t have to work, about the mountain of debt and now rising inflation, and about the economy being decimated.

And if the government keeps showing they’re not quite worried about any of that because some in government want to be part of what some now call a health cult, then the public might get even angrier.