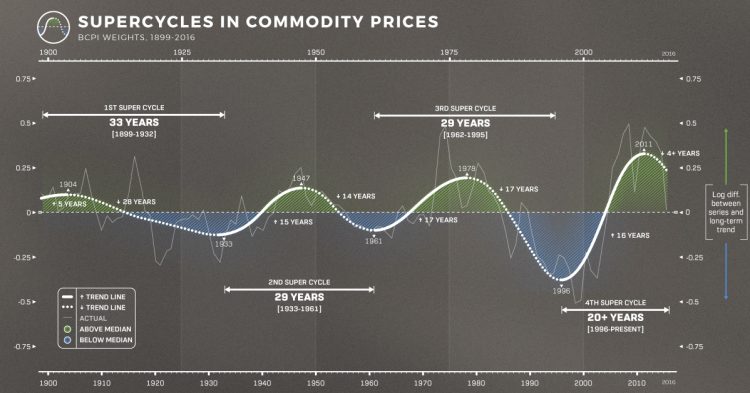 It’s December and there has not yet been a blow off top, with it looking a bit unlikely there will be one this month.

Much can change however, with such blow off tops usually happening in a two weeks period of euphoria. But the lack of it has led to a new theory, the supercycle.

Realistically, there are still three possibilities. A blow off top will happen. The circa $70k price is a double top with that itself being a blow off top, we just don’t know it yet, or the supercycle.

This is the suggestion that bitcoin and cryptos more widely have grown so significantly or have changed due to new arrivals/systems to the point where they may oscillate while gradually going up.

Bull forever, without the scary bear that devastates a lot of this space for two years. Something that curiously is suggested by both bulls and bears.

The question we’ll try to tackle is not whether it will happen, except maybe ancillary, but if it does happen, why would it happen.

One suggestion is because with the bull now repeating for the third time after bitcoin went somewhat mainstream with students in 2013, and even forth if we count 2011, there is sufficient evidence to suggest it is more likely than not that it will happen again starting in 2024.

No one can predict the future, but investment being in great part a game of speculation, this probability you’d think should change attitudes. And so rather than panic selling to the depth in about a week with the dip then no longer quite being a dip, more people might hodl and more investors on the sidelines might buy to price in 2024.

How do you price that in? In absolutist terms it is obviously impossible because you’d think at any one point the price reflects all known information and the changes in that information. You can’t include in it unknown information like will it 10x in 2024 or will it be just 2x the current ATH, or indeed just what is the ATH really if we don’t have a cycle to establish it.

But in a game of probabilities you can do something like if price below ath, then it will ath, as such the dips are less of a dip and the bear is kept at bay.

In combination, some suggest the arrival of hedge funds and other institutional investors will professionalize this approach, and although you can’t exactly price in 2024-25, they’ll do more pricing in than was previously the case.

This goes both ways. They might tamper spirits if it looks headed for a blow off top by frontrun selling, and they might smoothen dips if it looks like bad bear by buying. Same with retail holder who previously might have dismissed the halving cycle, but now probably do so less.

A third potential theory is that all previous bears were due to the infrastructure as a whole effectively collapsing on itself amidst a rush of new users, rather than the halving cycle as such.

In 2011, a hack of MT Gox led to the mistaken dismissal of bitcoin as a whole with things like Hacker News still not updating themselves now a decade on as they maintain that 2011 dismissal, but others saw through it.

In March 2013 a DDoS of MT Gox briefly froze the exchange and caused panic. Around December that year the exchange was about to go bankrupt.

In December 2017, Cryptokitties clogged the ethereum network while exchanges like Coinbase were wobbingly trying to keep up with demand.

So far there hasn’t quite been something similar, with this interpretation so suggesting that there was never quite a bear as such. More that new users just could no longer participate and they came to participate once they could when the infrastructure was improved.

As it stands, ethereum arguably can’t quite accommodate more which is probably why defi tokens are in bear, but the rolling out of L2 solutions are in the process of providing that infrastructure to accommodate more, and so instead of a pike top, we may get more gradual waves as new users onboard at the speed of the rolling out of the new infrastructure.

This cycle however even that mining inflation is being stokenized with stock trading bitcoin and eth miners holding the crypto they mine while relying on stock markets to raise capital.

That can lower the pressure on price, and thus can potentially give more credence to the suggestion of small waves instead of big cycles, but at some point those miners will have to tap into their bitcoin assets and even now, stock traded miners are a small portion of all miners so its effects are probably limited.

Thus if there is a supercycle, it might be only if the infrastructure keeps up with new demand, but bitcoin hasn’t quite changed from four years ago. Yet, if ething Cryptokitties caused the bear last cycle, then maybe the bull is due to eth as well rather than bitcoin.

If it’s just supply instead, then the slashing of new supply in eth by the merger may give it a new halving in a few months, so making that 2024 in 2022 for eth.

But it is most likely a combination of all of these things that would cause a supercycle if there is one. That being changes in investors’ valuation due to new information, the ability to handle more users, and the reduction in supply.

The latter two would feed into the first, which ultimately determines the matter, and so if we get both lower inflation and higher infrastructure, then presumably that would be the reason for why we would get a supercycle.

But whether there will indeed be one, remains to be seen as although the ingredients might be there, a blow off top is still on the cards as it stands, it might just happen when we don’t expect it.