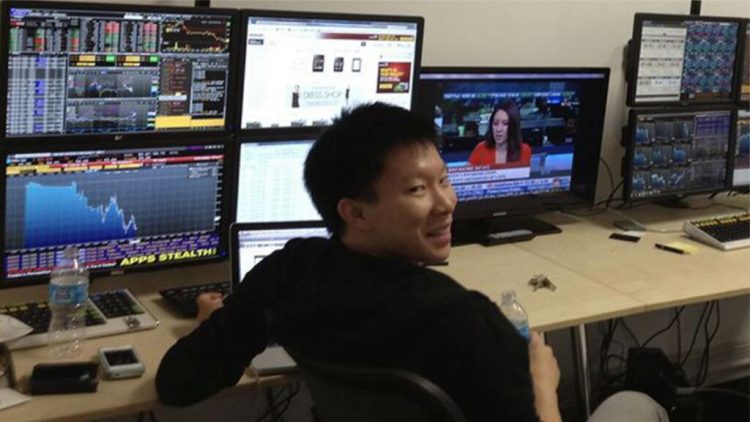 Three Arrows Capital, a crypto hedge fund, has bought close to half a billion worth of eth according to blockchain analytics.

Zhu Su (pictured), its CEO, has confirmed as much, stating: “100k eth is dust for what it’s worth, more coming.”

He said Three Arrows will bid eth hard “on any panic dump like this weekend” when the currency briefly plunged to $3,600, liquidating low leverage bulls.

Eth is now back to where it was before the dip, trading at $4,400 with a considerable ratio gain to now 0.085 BTC, its highest in four years.

This purchase is notable for following intense criticism of eth by Zhu and others at 3AC late last month just as some bear tunes started playing in concert.

After a $1.6 billion eth long was closed on November 11th, Zhu criticized the criticism of an eth dapp developer who accused others of leaving to other chains just for money.

Synthetic’s founder Kain Warwick had piled up on properties, Zhu said, while leaving his dapp to fall to just 100 active users due to high on-chain fees.

This attracted a furious response by some ethereans in a ‘debate’ that we tried hard to ignore until now with some accusing Zhu of trying to pump his own bags of Solana and Avax.

The debate itself, in substance, is reasonable in our view because competition is far more preferable to complacency with the ultimate decentralization in this space being the variety of different blockchains. Which is why if banks had wanted to coopt this space, they would have failed because they maybe could have coopted bitcoin, but we’d hop and hop until they got outplayed.

We’re not saying that’s what happened, but Avax was a bit promising as a potential solution to the scalability trilema, until fees there reached $7 as well.

Solana, we have previously described very simplistically as a pruning blockchain. If that is indeed the case, then it can be promising, but its pruning mechanism would just be adopted in something like eth with it probable in our view that a pruning mechanism eventually will be adopted once other potential solutions are saturated.

That being zk tech or other L2 forms of scaling. For zk in particular, they’re either on mainnet, though at a bare skeleton form currently, or on testnet.

So at least some people know to a fair degree how they will work and generally how ethereum will work with these new solutions.

If thus you’re trying to price the present, as many may be doing with defi tokens which are in a bear of sorts, then you might be pessimistic and may diversify with other chains.

If however your view is more that this problem is temporary and five years on eth might have a decent solution, then the present is irrelevant to the potential that can be unlocked.

Meaning neither in the debate was necessarily wrong, but some were more wrong to a greater degree, which is fine because through the debate all that nuance was presumably refined.

What is less fine is telegramming a sell of 17,000 eth and now telegramming a buy of 100,000 eth, but the difference between those numbers obviously tells you all you need to know, just as it clarifies how the debate concluded exactly.

Because we’d probably rather echo Kain in saying don’t leave, that can be the biggest mistake you make according to OpenSea’s founder who pointed out many left during the bear and now probably regret it.

But diversifying and building on other blockchains, as well as eth, is something else because for all their sins in the eyes of some, they keep the party going while L2 devs are hard at work getting out a potentially mainstream solution for the biggest smart contract blockchain.

We wouldn’t thus take the approach of ostracizing anyone like some bitcoiners tried to do when some maxis went a bit eth, because no one quite knows where bitcoin would be now if there was no eth to take in a lot that were disappointed with the blocksize conclusion.

In addition, some of the approaches that in development eth follows have come from other projects. Regardless of what one might think of Avax or Solana therefore, or even Pancakes, it is probable eth and this space more widely would be a bit poorer without them.

So we maintain what Vitalik Buterin himself once said, let a thousand flowers boom. And since these flowers have farmers, you’d obviously expect some show to go with that breeding of flowers.

May that show long continue because we’re about to enter in the next two years or so into the more interesting part of it where this space scales, and in that process we’d probably rather have a lot more Kaining and Zhuing as the pipelines will thereafter probably be fixed so to speak – making it important to get it right – but maybe without that telegramming bit, although considering its conclusion maybe we’ll allow it this time.