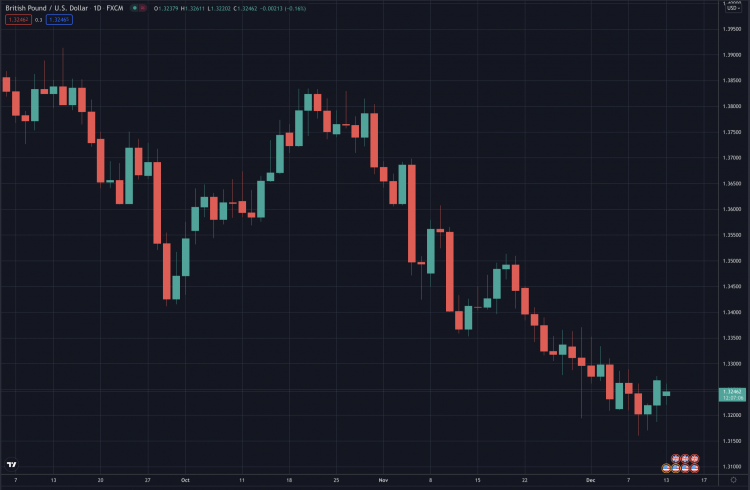 The British pound is down about 5% over the past month from $1.4 to the pound to now closer to $1.3 per pound.

The fall coincides with the gradual introduction of new restrictions across Europe and in the United Kingdom.

A move that has been met with widespread protests in the continent, including in Vienna where 44,000 by police’s estimates rallied against what some call the new normal.

“In the centre of Madrid, Spain, the throng held aloft banners with messages disparaging the vaccines and protesting against what they consider an organized plan to control society and restrict citizens’ rights.

Spain has a high vaccine uptake, with close to 90% of people eligible for the jabs receiving them.”

It so happens that vaccines are effective only temporarily against the now not so new flu, with the focus so moving towards boosters as the government sets up a treadmill of sorts for its population.

London also saw protests this weekend with parliament to vote tomorrow on the introduction of vaccine passports for the first time in history.

The biggest rebellion in living memory is brewing in the ruling conservative party, with at least 100 MPs thought to vote against a wholistic new regime with red and green lights from a government database that the government says is not a vax passport, and even if it was, it is temporary until 5th of January.

Two years on from two weeks to flatten the curve, no one doubts any longer that there is nothing more permanent than a temporary government program with Michael Gove, the Leveling Up minister, already working on Plan C that would expand such QR code checks to the drinking of coffee.

Who would have thought by leveling up they meant the pockets of big pharma which has signed a new contract until 2025 with the British government for test and trace.

Chancellor Rishi Sunak is setting up funds for routine vaccination costing £5 billion a year, with all this ‘free’ stuff to come from a new ‘social care’ tax in what The Times calls a “permanent programme for Covid-19 booster vaccines.”

The “cautious but irreversible” freedom day stands to see a potentially decisive defeat tomorrow in the oldest functioning parliament in the world as Boris Johnson conspires with his political enemies, Labour, in a backstab against his party that arguably has no modern day equivalent.

“I cannot justify introduction of Covid-19 passports just in case and without the data, and given that evidence from other countries is that vaccine passports don’t work,” said Alicia Kearns, a new Tory MPs and members of the 1922 Committee executive.

That’s while South African health officials wonder why they’re being completely ignored with South African Medical Association chair Dr Angelique Coetzee telling LBC on Sunday that “there’s no reason why you can’t trust us when we say to you it’s a mild disease.”

That’s like telling Tony Blair there are no weapons of mass destruction in Iraq. He knows, but he has a dossier and he can’t hear you.

Boris Johnson likewise is completely deaf, but he too knows very well this is completely exaggerated as now proven by the many parties where they laughed at just how easily the public could be fooled into subservience.

“It is part of our nature to obey such rules,” the new German chancellor Olaf Scholz tells Europe’s most read daily, Bild, ignoring the propaganda blitz that had the government buy the frontpage of every newspaper.

He called himself the ‘Chancellor of the unvaccinated’ while ripping up the promise to vote against forced vaccination as soon as he was officially appointed.

That’s while footage comes out from Germany of the police knocking down a granny for not wearing a facemask. The Chinization of Europe will not be resisted, even by grannies.

In Belgium, you have to show the QR code from the government central database to buy peanuts in the open air in a stall at the Christmas market. No mark of the best, no buying or selling of anything. “Or the number,” which hackers can get.

As much as millennials and boomers have protested Google’s and Facebook’s invasion of privacy, at least they don’t have an army or a police force. The government can send you to the gulags or worse, Google can not.

“This doesn’t pass the test of people’s liberty being fatally withdrawn,” an unnamed minister told the Guardian, oblivious seemingly to the fact that if you wait until “fatally,” then you’re probably gone already.

A new regime of QR marks to buy or sell anything is a pretty fatal knell on individualism as collectivist Asian societies, both in China, Japan or South Korea, clearly show.

It’s an intrusion by the government at every step, including in your home as the QR app stays on the phone and becomes effectively mandatory, whether vaccinated or unvaccinated, boosted or unboosted.

It may also be the first step towards the introduction of a social credit score as the government will gain the ability to cut you off at any point, eventually including for wrong think.

Because this flu is perfect for the redesign of society to be more like authoritarian China, with the waning vaccine effects being very coincidental to the convenient fact it makes this temporary regime a permanent new order that will take just ten years for those graduating to not know of a different world.

It will be those brown shirts then enforcing cultural compliance to keep up your mark, unless by then everyone is too bored of it, in which case they’ll find another ‘once in a century’ happening.

And if the results of the Iraq War based on lies was economic stagnation, the result of this might be contraction because the constant government intervention will burden the economy in every step.

So the pound falls relative to the dollar, which itself is devaluing a lot, and thus everyone gets poorer with aristocrats leveling themselves up after they fool everyone in thinking they meant leveling them up.

“This is a very dodgy road to go down,” the former Labour leader Jeremy Corbyn said in regards to vaccine passports.

He will vote against the proposal with it to be seen how many rebel in Labour as MPs now face the equivalent of the Iraq War vote that may be read back to them for years to come.

The previous generation was unable to stop that mistake. It remains to be seen whether this generation can stop this new big lie, which like any effective big lie is based on some truth – the now two year old flu that is dangerous to some but is becoming even milder – yet that aspect is ancillary to the actual aim which here must be that of QR coding everyone for unknown reasons but money and control.

It was March 2020, just as we were all learning about this, that Bill Gates publicly said there will be vaccine passports, will.

Now two years later in Belgium, you have to ping to some government database first to buy some peanuts on the street, with it probably just a matter of time until the yes or no of that ping comes based on whatever conditions the government wants, or indeed whatever conditions some administrator that doesn’t like you very much gives.

Imagine QR redding the code of anyone that wants to take part in some Extinction Rebellion protest. ‘But they broke the law,’ will say the government bots on social media. ‘This isn’t what it was meant for,’ will say the public. ‘Yes but… wait you haven’t forgotten what it was for, you will soon enough because it isn’t for that anymore.’

To say nothing of the hacks. India’s Prime Minister Narendra Modi had his twitter account hacked by presumably kids that wanted to scam for bitcoin. The QR database will probably be hacked too eventually, but no one will care as it doesn’t do anything anyway because vaccines or boosters don’t stop transmission of infection, which is why there are more cases now than when the population was unvaccinated.

What they do is implement total surveillance and continuous licensing requirements for anyone to participate in the economy, including government permission to travel beyond showing your passport.

But one of the richest man in the world wants all this, so you get no opposition in UK as the government conspires with their political enemies to enact the will of Bill Gates.

So welcome to China Europe as the real flu in the end was clearly the Chinese authoritarian system where they love these health scares now and then whenever they need a reason to iron fist.

Despite all that control, however, they keep on banning bitcoin as this thing was coded by similar hackers to the ones that coded their QR codes.

Which means ultimately any form of government governs by consent as there is nothing they can do against the will of the poeple.

So buy some bitcoin if you want to buy them peanuts without a QR code as cryptos are set to become pretty necessary if this new ping regime is implemented because it might be the only way to buy anything unless you slavishly keep up with the tons of conditions they’ll put on it.

Meaning even the mark of the beast turns out to be good for bitcoin in the end, unironically because you can circumvent it with bitcoin, but not for the pound as all this is not great for the economy, well the normie’s economy.

Anything digital should boom because you won’t be pinging the government your weekly shopping from Amazon, and there are no QR codes on metaverse concerts with 10,000+ gatherings. No QR codes for cryptos. Phones become mandatory because QR codes. Indeed a baby may soon come with a birth certificate and a QR code phone.

If you lose that phone, maybe you can walk home for ten miles so get a second one. Business in QR phone burners should be booming. Them Apple watches should be picking up now because QR codes. In fact the taliban are clearly backwards going back to their old opium business as trafficking QR codes is clearly the next new big thing.

So it’s not all that bad, just the mark of the beast. Which is probably what they meant by them 5G chips. It’s not literally in your body, it’s the QR code you have to keep around with you on your body, on your phone or watch or maybe just tattoo it, though you can’t do the latter because they expire as they want them to be digital so that they can social score more efficiently.

But bad or not, they’re saying Labour will back this and since things are now so upside down that Labour is in power rather than the conservatives, they say it will go through.

Boris Johnson is half backing down however by splitting the ‘Plan B’ vote into three, with a specific vote to be had on this new QR regime.

British people should nonetheless go to Trafalgar Square to celebrate the new era, and while at it they should raise the Chinese flag if the QR vote passes to make it clear the continent has been occupied and we now share the same regime of QR authoritarianism.