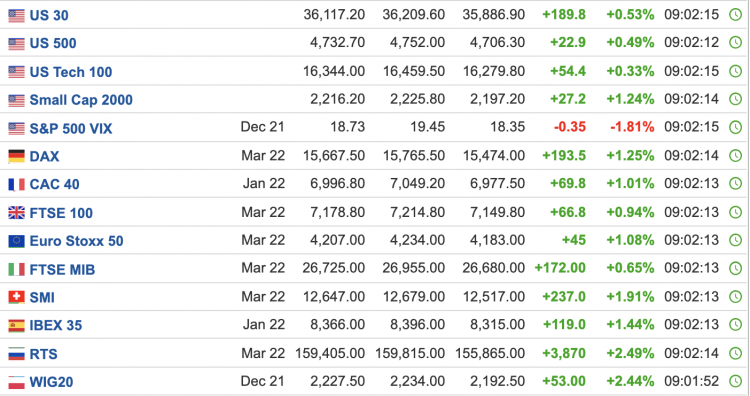 The Bank of England has just raised interest rates for this first time in three years, up from 0.1% to 0.25%.

Markets not only seem to not care however, they appear to be happy about it with US stocks rising after Powell suggested there will be three rate rises next year and asset buying – printing – will run to $60 billion from January, down from $75 billion currently.

Some say Powell’s bullishness on the economy, up 4% next year he says, made traders optimistic despite the faster than expected increase in interest rates forward guidance.

There’s no increase for now, and in 2024 the forward guidance is slower than expected, so stocks have chosen green after six weeks of red.

That may be because both of these actions by the Bank of England and Fed’s chair Jerome Powell suggests there is no lockdown on the table and there aren’t even any restrictions proposed that can properly affect the economy.

That comes after the humiliation of Boris Johnson in Parliament on Tuesday where excluding those on the government payroll, half of his own party voted against him for introducing limited vaccine passports for nightclubs and gatherings of 500+, which the government says are not vax passports because you can produce a negative test.

ID cards in all but name, and digital, with Rishi Sunak, the chancellor, thought to have murmured about no exit strategy.

A desperate Labour sniffing the changing wind went on TV to tell Mr Johnson and the government that they have Labour’s support to shove through any new measures, but it is difficult to see how Johnson can survive a second plot with the conservative’s political enemies.

So no new measures are conceivable for now, let alone a lockdown which would be political suicide. That means Britain maybe has been saved, and Engaland can enjoy a very happy Merry Christmas.

Some eyes now turn to Germany where the Tuesday’s events must have had some effect with the elf, Chancellor Olaf Scholz, presumably thinking twice about new restrictions in a fragile coalition of parties that in many ways directly oppose each other.

We now thus generally have a good idea of the political response to this new variant, a response that appears to be very limited in economic effects, but without financial support.

Sunak probably can’t quite open the checkbooks anymore, so you should expect a change in messaging in a couple of weeks because this variant is mild, hospitality is nonetheless suffering, there’s no money anymore for it, and anecdotally for the first time in two years when properly going out, there’s no cold afterwards.

So the population has now probably gone through the four or five variants and/or they’re getting proper Asian style biological immunity.

That might hopefully suggest this is over, on the ground if not in political bubbles, and where Parliament or Powell or the Bank of England or probably Sunak is concerned, it is over.

That means no restrictions are expected in USA because Powell is not giving money anymore. Hence we should expect the economy to keep running at normal.

Except in China. A slow train crash there in the property markets and lockdown theatrics that no longer fool anyone, means China will probably have to loosen more their brrr printers.

Their troubles are contained however to their own country with only small effects outside it in the grand scheme of things. So US tightening may be cancelled and maybe even turned into global net printing by China’s loosening.

There’s also what must now start to be a slowdown in share selling by the ultra-rich. Sergey Brin, Michael Dell, Bezos, Musk, all of them have been selling for the past two years probably to lock in capital gains prior to new tax rates.

That must be over now or nearing the end of it, so maybe, who knows, perhaps, the six weeks of red get to see some Christmas green.

Because everything by now must be priced in and that uncertainty is now gone as we gain a decent understanding of planned actions.

One thing that probably is not priced in however is Desantis becoming president. He probably would be pretty good for the economy and if he runs against Biden, he probably would win.

He’s young, and he seems to know about tech and the things that are moving the world of today. So maybe, perhaps, potentially there’s now some reason for Christmas optimism as the roaring 20s – at least in investments – hopefully continue.