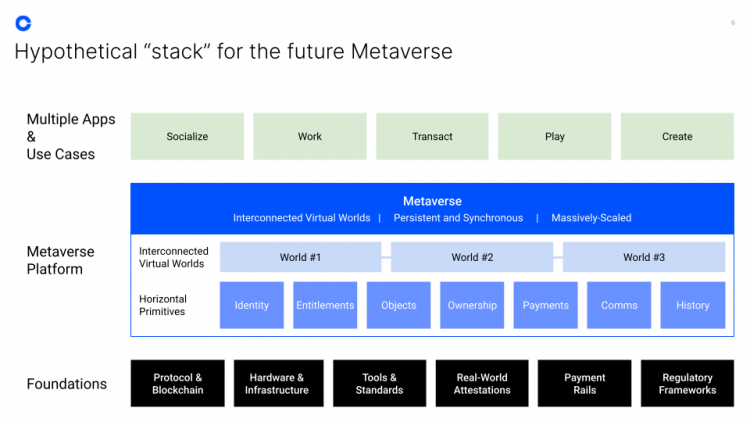 Coinbase has announced intentions to work on a wholistic infrastructure pipelines package for the metaverse with it giving some hints of some products in development.

“The Metaverse will rely on blockchain to transfer identity and ownership across virtual worlds, attestation to verify them, and payment rails that allow people to buy, sell, and earn income within a decentralized economy,” said Brian Armstrong, Coinbase’s co-founder.

On identity they hint they’re building an easy logging method, something like MetaMask or Wallet Connect. Also some sort of Schemas for attestation, things like KYC or credit data.

“We want to help pull all the pieces of identity together — essentially creating an identity on-ramp into the Metaverse,” Armstrong says.

They describe the metaverse as multiple interconnected worlds with the blockchain providing that interoperability where it concerns identity, and thus how your avatar looks, what he or she is wearing and what it owns.

In that world Coinbase seemingly sees itself as the entry point, the one providing the identity by acting as an intermediary for the blockchain.

There are browser wallets however, like MetaMask, that provide you a direct connection to the blockchain. So it isn’t clear what Coinbase can add except facilitate for its own customers a similar service.

The Dream of a New Global Village

This announcement is less notable for what it says and more for Coinbase suggesting they too believe the metaverse is coming, and they claim a stake on it being on the blockchain, specifically ethereum’s blockchain, as they say they’re working on “features like Sign in with [Eth/Coinbase], which could allow users to sign into every app in the Metaverse.”

They don’t plan to build anything on the metaverse however, sticking to shovels like their announced plans to launch an NFT market place.

Coinbase’s competitors want to launch one too as NFTs grab cultural imagination with South Park taking a typical dull line of NFTs mean the end of the world – buttcoiners stole that ages ago with their nonsense timetraveller – while NewsNight asks who wants a virtual pair of sneakers that you can’t wear for $10,000.

Speculators, for now, with our inbox full of NFT NFT NFT. It’s a craze, but because it’s cool and new and because the metaverse allows us to imagine what can be.

It’s indescribable for example being in a dark room, and suddenly you have the NASA operators talking and the astronauts on the moon replying, with your 3d becoming the moon while the rocket comes into vision and you see a ‘live’ stimulation of those first steps six decades ago.

It’s different from a video as it feels a bit more real, more… well you can move around and get the angle you want and once the hardware develops you can maybe even get the feeling of touch.

Making it all an extension in effect of the physical world, and as way more will be able to see you in the digital realm than in the physical one, then presumably the importance of good fashion – albeit digital – for ordinary people increases by the same measure.

So a new global village is coming that will facilitate meritocratic connections – outside of physical or monetary limits – at a new rate of intensity where the so called Aristotle scholars of ancient Greece or indeed the Pythagoras brotherhood is not at the now lifeless ruins, but in the entire world and at all points of the globe simultaneously for those of will or wit.

Something like that already exists in our chatrooms, but this built right allows a different level of casual expression, a higher degree of what we’ll call autonomic individuality, and most crucially a greater capability of meritocratic will.

As all that develops in reality, maybe a lot of this articulation will turn out to be phantasy, but fundamentally the rational aim for wanting to build all this would be the desire to connect Einsteins together in a somewhat organic way and in their youth or good time, wherever they are in the world, and whatever their status, fortune or misfortune.

The aim would be to add a booster of sorts to meritocracy and to add new intensity to it, so that we as a species can not just handle the growing complexities, but can harness them to our great advantage, and by ours we mean that of matter itself, that of energy which can never be created or destroyed, but can change state to entropy which we have to prevent or slow down.

With stakes so high, there won’t be a Coinbase or a Facebook to act as the sole entry or exit, but at this stage, their efforts and all of others are useful to get there.