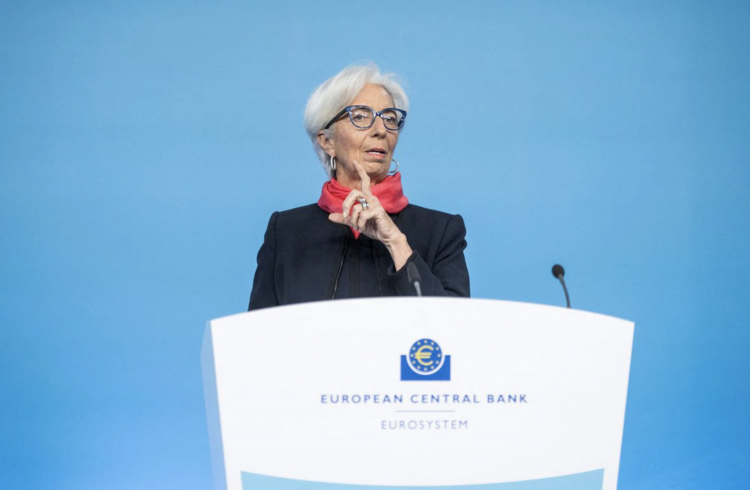 A confident market following Jerome Powell’s speech has been shaken a bit by Christine Lagarde, the chief of the European Central Bank (ECB).

“To cope with the current pandemic wave some countries have introduced tighter containment measures… This could delay the recovery… The pandemic is weighing on consumer and business confidence,” Lagarde said.

She expects no rate rises in Europe before 2024, suggesting the euro economy is doing pretty badly, certainly compared to that of the United States where three rate rises are expected next year as Powell predicts 4% GDP growth.

We can see much of this play in our own bitcoin. The Powell put there, up up up in green and then the Lagarde red staircase down.

You can see above we’ve highlighted 5AM UTC, that’s around 6AM in Europe as pre-market traders get to work.

We’ve highlighted that specifically because in these hourly candles we can see during China time, nothing is happening.

Without this euro picture, we would have been forced to make a very radical suggestion that China is not bitcoining anymore because quite a bit was happening in their stock market during the same time.

Yet we have seen China’s moves on our bitcoin charts everyday, so a lot more likely is that Europe is now the dominant global economic matter, at least for the day, and Europe is or was driving bitcoin’s price for the past 24 hours.

The Bank of England has raised interest rates by 0.25% because the Boris Johnson humiliation in parliament means economically damaging or even hampering restrictions are unlikely. Thus the economy will hopefully grow.

Likewise Powell’s indication of three rate rises next year suggests little political risk to the economy, so the show goes on, but not in Europe.

Germany is thinking of instituting a new regime where the unvaccinated, which might be as much as 30% of the population and may grow as vaccinated definition moves to boosted, will be unable to engage in economic activity save for the basics of food shopping.

There are no indications currently that this forced restriction will come with scholzbucks, free money for being home imprisoned, unlike during previous such measures.

This tension is playing in a pantomime of sorts in Britain where Labour has been caught a bit off guard by Chancellor Rishi Sunak going off to California.

Where our free money, Labour is basically saying, asking for rishi rish to get back immediately and hand out tons of cash to businesses Labour has forced into economic hardship due to backing new restrictions.

Sunak however no longer has any money. As much as Labour may want to bring socialism through the back door by claiming they care about 90 year olds to the point they’re willing to crash everything, and as much as Sunak may appear very wity in effectively cutting their legs politically speaking by making Labour look as the meany that is stealing everyone’s Christmas while leaving people without food, it is the maths itself that leaves us in this situation where new restrictions means no new money, the worst of both worlds.

Lockdowns were accepted and we could even afford them because while some, including this paper, wondered whether Powell was out of ammo last year, Powell was right to say he wasn’t out of ammo.

He wasn’t out of ammo because there was effectively no inflation. He could print thus and the government could give out free money without in-front taxation because there was no danger of monetary bankruptcy so to speak.

Now with inflation in America at 6% and in Europe as well as in UK at 5%, there’s a risk that it takes a life of its own especially if the bazooka comes out again.

That means Powell is now out of ammo, and while Lagarde is going more slowly, she is also moving in the direction of reducing the printing because she has to.

Whether next year or the year after is more academic and far less relevant than the fact reality is imposing a limit to how much support the central bank can provide at this stage without risking the unleashing of uncontrollable inflationary forces.

Thus you’d expect politicians in Europe to start moving again more towards limited restrictions that do no hamper the economy with Austria out of lockdown and following what happened in Britain, Germany will hopefully also ditch its draconian plans to act very responsibly in keeping the economy moving.

Because there is no more money. The effects of these restrictions can no longer be cancelled economically. The choice is no longer quite just stay at home and all will be fine, but stay at home and starve in the current proposed environment where it’s the worst of both worlds.

This slightly affected bitcoin because people in Europe are presumably saving fiat as they might be worried of losing their job especially if the government effectively forces them into starvation by denying them any right of general movement as Germany is proposing.

Something that might leave Europe behind because there is no easy trick now that can cancel economic effects, with Lagarde going a bit slowly because Europe was in a more deflationary environment than US, but European politicians are hitting the same hard wall. Maybe they just don’t know it yet that there is no more money.