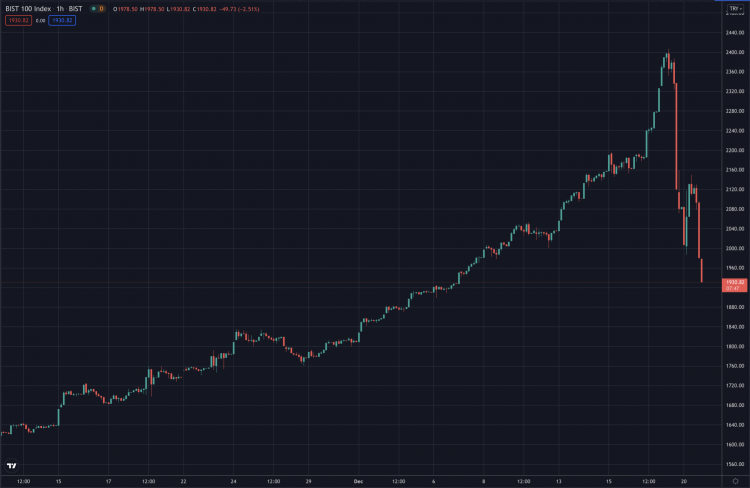 A brief relief today after a 2% green for Turkish stocks turned to another market halt as it plunged 5%.

While the lira kept losing against the dollar, Turkish stocks gained, up 10% over the past 30 days. That changed on Friday however, with today’s crash attributed to some by new remarks by President Recep Erdogan that he will keep fighting high interest rates. “Do not expect anything else from me,” he said.

Yet this sudden plunge in Turkish stocks may be more due to concerns about the global economic outlook as the high stakes political debate about whether lockdowns are coming or not rages on.

Today is the first opportunity for markets to react to Netherland’s announcement of a lockdown on Saturday with the messaging change in much of northern Europe leading to worries that a lockdown by stealth is developing as people stay at home voluntarily on government advice.

Chancellor Rishi Sunak will presumably have to speak soon. He is thought to be weighing a second bailout for hospitality in a political atmosphere full of dangers as the swans keep dancing in the British Parliament.

There are reports iron demand is dropping quickly in China following the property market collapse with expectations that related businesses and goods, including household appliances, may see a hit.

It’s the third instrumental cut this month as China moves towards more and more loosening, but it is far far too little even for China’s circumstances in isolation. In the global environment, it is clearly not even a blip.

Unlike in the March 2020 lockdown when there were quick and clear developments, a fog currently reigns over the market with it left to speculators to wonder how on earth can they possibly square the already on the brink of out of control inflation with more money printing that even restrictions, let alone a lockdown, requires.

The Treasury Secretary Janet Yellen is utterly silent, with it seemingly left to Sunak to figure out the impossible as the political expediences of the party gates turned the UK into the biggest economy to be at the most advanced stages of an incredibly intense debate.

Bitcoin is kind of moving down but sort of holding on. The asset and the market is probably thinking a year or two ahead and as it stands, there’s isn’t quite a decision on whether there is money or there is no money.

The matter is very political as Labour clamors for more and more restrictions because it will force more handouts, more printing, higher taxes, and effectively more communism.

Some in the conservative party therefore are also thinking two years ahead when we forget about all this and the debate turns purely economical.

All those forces in so many directions are now waiting for an answer: money or no money. If no money, Boris Johnson needs to become more like Desantis and less like Starmer. Florida’s economy is booming so markets would probably like that.

If just a bit of money to do the bare minimum to cancel the damage done while making it clear no more thereafter, then there should be some relief in markets as at least it is likely the economy won’t get worst.

Bazoka money is now not on the table because central banks are not playing ball anymore, but the risk of course is that Boris keeps being Starmer regardless. Multiply that by all the other dum donkeys in Europe and America, and it is no wonder why Dow Jones is down 2% this red Monday.

Where bitcoin is concerned an increase in the loss of confidence in fiat money should make the asset boom as governments are now a bit in trouble and as Florida and Sweden show, a lot of that is because of utter incompetence.

But there is some uncertainty currently and little clarity of direction in regards to what the government will do to cancel the effects of their harmful restrictions, so red continues.