Bitcoin Rises as China Turns Bull While Boris Backs Down 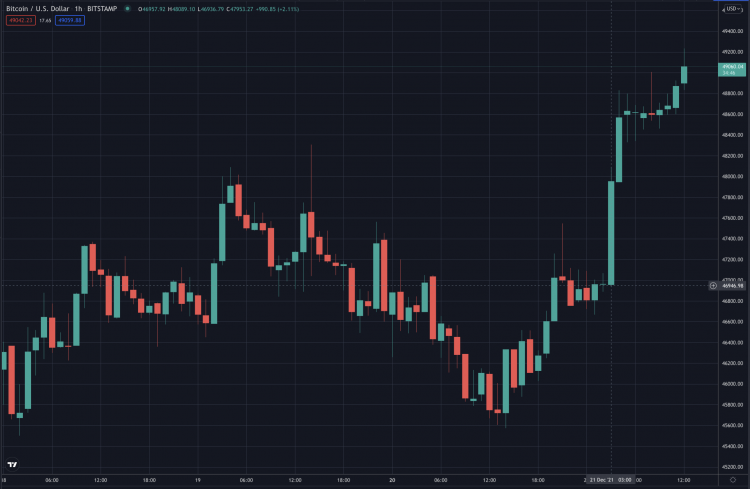 China has bought bitcoin for once during Shanghai trading hours earlier today when the currency jumped from $46,000 to $48,000.

Europe has carried the momentum with FTSE up 1% after Shanghai’s index (SCHOMP) gained 0.8%.

America is keeping up as well as bitcoin rose to above $49,000 while New York was waking up with their stocks expected to go green too by 1% or more.

In the face of global red on Monday that saw Dow end up down 1.25%, bitcoin curiously stopped playing as it held above $45,000 and wouldn’t move down even while stocks did.

Bitcoin is thought to be more ‘advanced’ in macro speculation, so that refusal to follow down and the now green up might suggest a change of trend.

Some put it down to investors reconsidering judgment on the new variant in light of growing evidence it is extra mild.

That’s after Boris Johnson, the British Prime Minister, was forced to back down yesterday after clearing his diary for emergency meetings.

The shock resignation of Lord Frost would have given credence to some suggestions that some ministers said at a cabinet meeting they would resign if there are new restrictions.

Johnson is thought to have wanted new rules on indoor mixing, but in the end he came out to say there will be no new restrictions whatever.

Crucially, it was Boris Johnson that spoke about support packages for pubs and hospitality that has been affected by a new pingdemic and by people voluntarily not going out as much, rather than the Chancellor.

There too nothing has changed with Johnson re-iterating the support package clarified by Chancellor Rishi Sunak on December 16th.

That is local authorities have a quarter of a billion to support these industries, business rates have been cut by 75% and there’s loan support.

We take this to mean that by being very silent the Chancellor is saying there is no money, which in turn presumably means Johnson and the conservative party as a whole will have to be a bit more like Desantis rather than like Starmer.

All that may have gone into investors’ recalculation of the economic outlook with stocks and crypto going green.

That China has done so where bitcoin is concerned may be notable because some blame them for bitcoin’s continuous fall during the past six weeks.

That is probably a bit simplistic as there are many other factors, but Huobi kicked out some 15 million Chinese users last week after a months long process.

Thus China morning has often meant flat or red during November and December so far, with all on the lookout for any sign that might be changing.

A $2k green is one sign, but it might be too early to say. However unlike for US stocks, bitcoin doesn’t quite care what SCHOMP does, or at least it didn’t as far as observation goes with SCHOMP often green while bitcoin fell.

So tempting though it is and perhaps it is even correct to suggest today’s move in China was just macro rather than bitcoin specific factors, there isn’t quite conclusive evidence either way. But we suspect, and have been since Friday, that there’s a changing trend in China where bitcoin is concerned.

More generally, we’re entering the festive season now so ordinary ‘transmissions’ are suspended, which includes politics itself, and people generally get more relaxed as they enter the magic season with some maybe even going so far as to consume a movie for the first time in a year.

Our exaggeration being an indication that worries, concerns and even speculation is starting to get a new dimension as people try and have fun, try and enjoy themselves, try and think about good stuff, and try and leave the more serious matters to the new year.

Thus we may get more ‘happy’ buying of bitcorn for gifts as people slow down a bit to look at quite an amazing year that has gone, and some maybe even dare think of how the new one can be even more amazing.