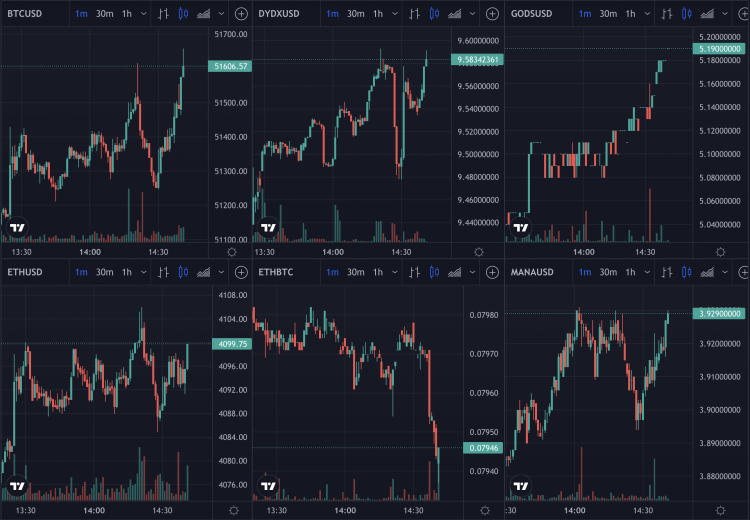 Bitcoin is up above $51,000 after some volatility during the weekend, with the currency maintaining the upper range as it potentially looks to take resistance at $52,000.

Other cryptos have also risen, but ethereum has been losing on the ratio, down below 0.08 BTC with one eth now at just about $4,100. Suggesting that maybe bitcoin has taken the show.

In which case, there may be a rise in store as stocks go green too with Dow opening at plus 0.4% as of writing.

One reason may well be that people are returning unwanted presents to buy bitcoin and stocks, or indeed are using the money they have been gifted for that purpose.

But another reason may be that the economic outlook is turning positive as England, which is at the most advanced stages of a debate on the now new cold, is opting for no restrictions.

Boris Johnson, the Prime Minister of just England when it comes to this specific matter, is to hold a meeting with it leaked that he “is not expected to announce new Covid restrictions for New Year.”

Emanuel Macron, the French President, is to meet an hour before Johnson with French papers saying he will impose new restrictions, including for some incomprehensible reason removing the negative test option from vax passports that might be extended to be required for everything, including going to hospital albeit not for emergencies.

The English, in contrast, can be a bit proud to at least so far have defeated, politically and very peacefully, this march to authoritarianism and a new regime of effectively social credit scoring through a centralized government controlled database.

That’s due to a spectacular December that should make proud the British English press too which revealed they were laughing at the plebs while planing digital IDs to control movements and peoples potentially forever.

And plenty in the conservative party should also be proud first for re-instating parliamentary democracy that has ended the rule by diktat in the United Kingdom, and secondly for successfully rebelling against proposals that implement a China style new authoritarian regime of digital red and green app orders.

For if England doesn’t fall, the rest won’t either. Certainly not the United States where a lot now gets complicated for those that want lockdown forever. Maybe not Germany either.

That said, some of us did or are having a cold this Christmas as it makes its way around the globe. People are being more cautious naturally, but at least where England is concerned, they no longer have to fear their own government as well.

That should make it a slightly more cheery new year and maybe for most, a very happy 2022.