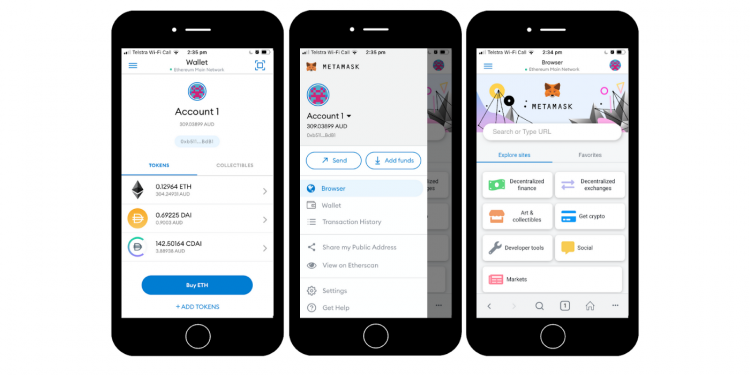 MetaMask has become one of the biggest crypto app, contending with the likes of Coinbase and Binance as the blockchain connector attracts more than 21 million users.

There are now more than 11 million active monthly users of the Metamask wallet, 100,000 of them using just the ox protocol when interacting with the vast space of defi.

It is thus growing fast, with it establishing itself as a key part of web3, an umbrella term to include defi and NFTs as well as pretty much all of the smart contract based activity.

A ConsenSys spoke, or incubated startup, it has expanded to include other chains as well as an app browser on mobile.

It remains free to use and in its now 6th year, there have still been no protocol level problems. It is online of course, so that makes it a hot wallet, and thus anyone sensible would still hold only small amounts there, less than $10,000 at most, but it has become a bit of an integral part of the ethereum system.

And thus, will it be tokenized so that public ownership of public platforms can extend to the infrastructure that connects to such platforms?

Every little thing that Consensy’s founder Joseph Lubin says is now closely scrutinized for the tiniest of hints on whether Metamask will token.

It would be the biggest such event yet. The airdrop of airdrops where this space is concerned. It would also placate any concerns they might be getting a bit too powerful, too entrenched, too easily monopoly foreseeable.

As we’re seeing with things like Facebook, you can of course launch your own, but it would be a dead town. There are differences, your address has all the data and so any wallet has them too. Unlike in a Facebook fork where the fork has none of your data.

Yet, all these wallet dapps need to offer you the opportunity to ‘connect with Metamask fork,’ and they’re too busy with a lot of things to give you such opportunity without much effort on your part to get that Metamask fork to be a worthy addition.

There are competitors however, WalletConnect being one, but we haven’t used it because we haven’t had a need for it and thus presumably, we can anecdotally derive that Metamask is by far dominant.

Which is potentially a big problem. Not yet, they’re Google in 1999, but are they a can’t be evil?

Just as in 1999 bias-edly ‘curating’ search results some thought unthinkable while others thought expected, so too it is very easy to see how Metamask could potentially kick you out of the web3 playground.

Currently they may well say it’s an interface over which they have no control, simple private keys ordering public keys, but they know how many users they have and even how many are active – while we can’t easily see such thing on the blockchain – and thus they may be able to have control at the interface level.

Currently of course it isn’t too much of a problem, and unthinkable in any way that any abuse would happen because they’re still way too fragile, but in time and very slowly, the corporate board may change and they may be too important for the government itself to not order them implicitly and very directly, though privately.

That establishes why they should have a token. Not necessarily because it would solve all problems, but because you’d presumably feel safer with your peers judging you, rather than some out of touch and very rich corporate board that wants you to be kept in place.

The token would be a governance tool where you can vote on things binding to the board. Not day to day matters, but stuff like should Iran be banned.

Recently Consensys revealed that the Philippines are the biggest users of Metamask, USA being second. If they know as much, then presumably they know how to bar them too. It may not be necessary however because Google or Twitter do not fall within the Iran sanctions regime. The Iranian government is on Twitter. So Metamask might not be asked to ban them as that would be counterproductive from a policy perspective, but they probably do have the power to do it where their own wallet is concerned.

And that’s way too much power without some public council to give judgment at the executive level. Which is why there must be a token.

Their problem is probably that if they wanted to do it in a ‘safe’ way, they’d have to bar USA at least where receiving the token is concerned, and USA is their second biggest user.

They can still use it however, they just won’t get the token. Something controversial, but they can blame Biden. Or they can get some guts and fight SEC in court until it doesn’t matter.

The alternative is to punish all, but it isn’t very clear whether the market would accept it because Europeans can fork it and get their token and so go in a different direction.

There wouldn’t be much balkanization either, in practice, although we’ll pretend there is because no one wants grandpas to lose face.

Yet there is a risk that we sleepwalk into corporatism which for a lot of things in this space doesn’t necessarily matter, but for infrastructure connectors is vital to avoid as we’ll otherwise be disrupted too soon just as is about to happen to those that abused the opportunities of the 2000s.

Because something like Metamask, or Opensea, not tokenizing is in many ways a betrayal of sorts of the spirit of egalitarianism.

They’re still within our control however, and so we do still have the power to punish them, which we didn’t with Coinbase.

Coinbase is attempting to become a monopoly of sorts by taking advantage of regulatory barriers that keep out competition with Brian Armstrong still a founder, and so the company still moves, but the centralized exchange space is a bit dead with that being a devils bargain of sorts to keep regulators out of the protocol.

But for something like Metamask, or Opensea, it would arguably be only carelessness that wouldn’t take some power away from the corporate boards and to the public.

Because there’s no reason not to. And thus until Metamask tokenizes, it is not a success story but more a leech, a forced rent seeker that cares not to distribute power but wants it all for itself. Something to be disrupted.