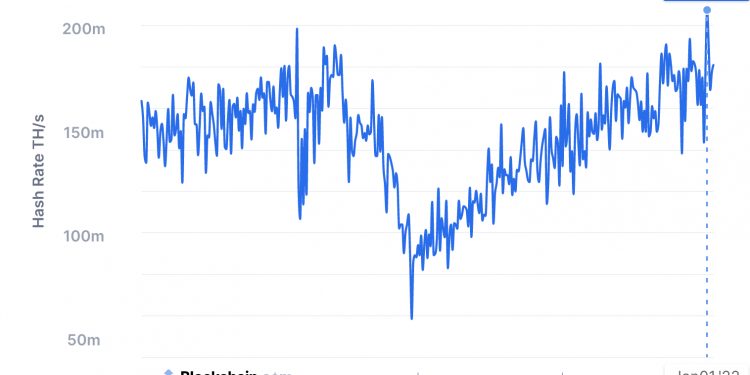 Bitcoin’s hashrate is largely unchanged despite a country that is thought to have about 5% of the global hashrate, Kazakhstan, cutting off the internet.

The blackout appears to be fairly strict with no internet connection among the general population. Thus mining nodes may have been cut off from the global network as well.

They may however have satellite connection or other backup, or the blackout is limited to residential areas because although there was a small dip in hash from 207 Exahashes a second (Ex/s) on January 1st to 168 Ex/s on January 3rd, it has risen since to 180 with the blackout occurring while the hashrate rose.

There have been rumors that the government there was limiting mining prior to recent events ostensibly to limit energy pressures. Thus either there is no more mining in Kazakhstan or they bypassing the blackout.

The people of Kazakhstan have suddenly risen after a price cap on fuel was lifted, doubling costs. One protester said they wanted to show that there is a different Kazakhstan.

This forgotten country where the global map is concerned is fairly rich with a GDP of $170 billion for 20 million people.

It was growing at 4% prior to the pandemic when it had a relatively small recession, with it growing again last year.

Inflation is a bit high at 8.4% with interest rates unchanged at 10.5%, suggesting on the surface a bit of mismanagement where money is concerned with their Kazakhstani Tenge falling to the dollar to now 435 KZT per USD.

The sudden protests seem to have been ferocious with government buildings and the airport taken over by the protesters, suggesting presumably widespread support within the country.

Russia has now sent in troops with protesters shot at the town square according to reports, while the cabinet has resigned, but not the president.

The people of Kazakhstan are generally poor according to raw data, but not starving. Their median wage is $200, meaning that’s the common wage for labor. The average is $400, presumably that would be things like teachers. The higher end then you’d think would be about $1,000 a month. Making it middle income, though poor by western standards, like Russia or Ukraine.

Their GDP per capita however is $10,000 a year, in great part because this is a country very rich in oil and gas. Anecdotally it appears that oil and gas is mostly controlled by Russians, private citizens and companies, who mostly seem to be in managerial or ownership positions.

Where the people are concerned generally, some speak good English, suggesting a robust education system. They generally appear to love Europe, seem to be indifferent to USA, and are neutral to very slightly negative towards China.

They have been isolated for decades under the Soviet Union, but with the rise of the internet they’re learning more and more about the wider world.

In general they seem to be resourceful. Though tiny wages, they still have decent housing, the usual amenities largely as in the west, and some are well travelled.

Previously signs of discontent with their government weren’t too visible, but some were clearly unhappy with the authoritarian style of governance, dismissing elections as theatre, and showing unhappiness with their rich resources not quite going to the people.

Their president calls the protesters terrorists however, showing he is clearly very much tone deaf. Russia for its part does the usual blaming of USA.

We think instead there’s more a countrywide cultural shift in great part because since the 90s they’ve been able to travel more and because the internet clearly has began integrating them more with the world.

This protest thus can symbolically be seen as saying hello to the world, we are also here and we’re no longer willing to be forgotten.

The people of Kazakhstan are most interesting because they’re a fairly unique mix of European, Chinese, and a bit Turkish.

They clearly don’t look up to China however, and they don’t mind Russia, but they seem to want greater integration with Europe in particular.

That gives Europe a particular responsibility where the current unfoldings are concerned. The European Union should thus protest at the killing of civilians, especially if that is done by foreign forces.

But there probably isn’t much else that can be done. Sanctions would be folly as it would divide the people and isolate them when what they want is more integration for lack of a better word.

The only other option would be troops. Russia has sent them, so why shouldn’t Europe? The answer is presumably because this is a matter between their President and the people, and it’s up to those people to judge that Russian interference.

On the other hand a strongly worded letter has nowadays become a bit of a meme, but by doing so the European Union will exert some soft power which maybe will be appreciated by the people there seeing as there isn’t much else that can be done.

But whatever the outcome, it is clearly time this region is not quite forgotten anymore. The European Union should cooperate a lot more with them, in matters of science in particular, technology, but also oil and gas.

Their politics are of course internal matters between the people and their president, but whether authoritarian or otherwise it shouldn’t stand on the way of business cooperation or even cultural cooperation.

Because this isn’t Russia’s country and it’s not Russia’s region. It’s a sovereign region of the globe that happens to be at the borders of Europe with both Europe and Kazakhstan benefiting by greater cooperation.

You would also expect a far bigger outcry against Russia’s interference in the internal affairs of a sovereign state as this isn’t the 19th century or even the 20th when you can send troops to your neighbor in what is effectively an occupation.

They should be withdrawn immediately. Otherwise it isn’t clear why Europe should not consider that a counter-response may also be troops because Russia does not have the right to so blatantly put down a sovereign peoples who just want a better economy.

That can only be reached by more cooperation with Europe, rather than isolating themselves to the very poor Russia where the median wage is also about $250.

Whatever the outcome therefore, change is clearly coming because there has been a cultural change with the entire region now no longer quite off the map. As such, there will be more Europe in the stanis whatever some dictators may want because the people there want to be part of the globe and no longer want to be isolated.

They want the sophistication that Europe provides, rather than the brutalism of Russia, and with time they will get it as the arc of history tends to move towards liberty.