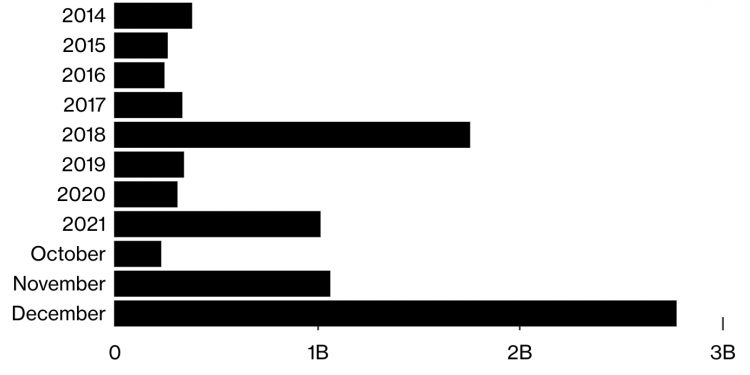 Call it the power of Wallstreetbets where they’ve pointed out this special inflation linked bond which on its face pays 0%, and has done so since May 2020, but the inflation component pays 7.12%, with that to be reviewed twice a year.

$2.78 billion of these bonds were bought in December, $1 billion more than in 2018, a record year that saw inflation at 3% due to a jump in oil prices.

November saw $1.07 billion bought according to pictured data from the US Treasury as inflation jumps to 7%.

There’s a cap on these bonds however to $10,000 per person with an extra $5,000 component if you go directly through the government.

They’re meant to be long term investments with a penalty of three months interest applying if not held for five years.

Making it a risky bet as inflation may come down, leaving you with an asset that has little returns.

But the huge jump in demand may potentially explain the November and December draught we’ve seen in both bitcoin and stocks.

That’s a crash in effect at least in some corners and sectors, with January too showing up to be very red so far.

The flight from these stocks may have ended up in bonds with the big question of course being whether this re-adjustment is over.

That may depend on inflation expectations which itself might depend on supply chain issues as well as a spike in gas and oil prices.

It remains unclear currently whether China and Russia are geopolitiking markets, with a strict and harsh lockdown imposed on an industrial Chinese region when it appears very unnecessary especially as studies show – and their official data seems to confirm – that their population is genetically immune, so they can’t fool anyone anymore.

In regards to Russian gas, America is sending its liquid containers with it a bit unclear what is going on in the gas rich stanis as pressures intensify to diversify, especially for Europe.

Another factor is of course interest rates with the consensus seemingly being they will go up this March, although they may be delayed until summer when expectations are inflation will go down presumably because China at some point will stop shooting itself on the foot as measures are taken to regain supply chain independence.

More subjectively, it does feel narratively that a lot of this has run its course during the Nov-to-present readjustment in speculative value measurement, but it remains to be seen whether sentiment will regain more confidence as stocks open on Tuesday.