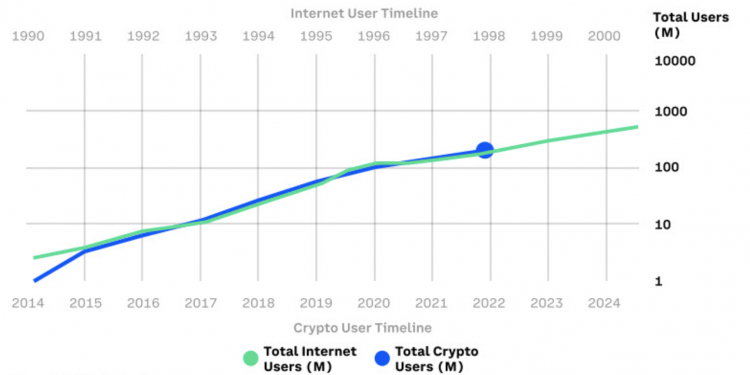 Web3 flamewars are becoming an almost daily occurrence on Hacker News, the startups incubator that gave us Coinbase among others.

The topic of the day is whether it is or it isn’t too early for blockchain, with no one quite talking about ‘blockchain’ as discussion focused instead on web3.

The ‘scam, pyramid, money laundering, ponzi, reeeee’ camp claimed a gotcha in arguing that all these dismissals of their criticism by pointing out it’s still early and tech takes time, is invalid because they’ve decided that it isn’t actually too early.

“The more you think about it, the more ‘it’s early days!’ begins to sound like the desperate protestations of people with too much money sunk into a pyramid scheme, hoping they can bag a few more suckers and get out with their cash before the whole thing comes crashing down,” tells us some ‘wikipedia editor.’

Molly White is also the Tech Lead at HubSpot, the “developer and marketer of software products for inbound marketing, sales, and customer service.”

“A lot has changed in the technology world in the past six to twelve years,” she says. “Yet, we are to believe that as technology soared forward over the past decade, blockchain technologies spent that time tripping over their own feet?”

It’s a blissfully ignorant view you’d expect from someone who has concluded a bearer finite digital asset is a pyramid scheme, despite that long refuted point now being pretty much as old as her years climbing the corporate ladder at the 2006 HubSpot ‘startup.’

Is crypto taking away her minions is one question that comes to mind regarding her prejudiced view that clearly appears to be stuck in 2013 when she began her corporate mill with a rehashing of the classic: “no one has managed to find a positive use for blockchains that wouldn’t be better served by blockchainless technologies.”

There’s progress however. It used to be that no one is using it, then no one accepts it for payments outside drugs, then it has no killer app, and now that it has no use outside of finance.

Finance, just that little niche industry that values all things, including her time which she presumably is compulsed to give to some marketing oldup.

With that priming, most of the comments are what you’d expect, rehashings of 2013 talking points that have gradually been settled one by one as far as this space is concerned, and therefore can be seen as just some update bug of mother nature. All furnished with the classic reeing at someone stating he has changed his mind by accusing him of ‘evangelizing.’

Something that makes us wonder whether there’s some sort of an authoritarian fear and silencing culture in corporate Valley which can only maintain itself by shutting down debate and censuring different view points. It would very much explain the very un-American approach to censorship and debate control – including through bots – that we have seen. Making crypto the hip and cool counter-cultural against overbearing authoritarianism.

But someone did bother to bring some substance, to update those that want to be updated. He says:

“A lot has changed in the blockchain space too. Just because you don’t know about it doesn’t mean it isn’t true. A lot of those changes are on par with some of the tech advancements mentioned.

In 2009, you had bitcoin, so basically a distributed consensus workaround that enables artificial scarcity of fungible digital items.

Yes, yes, ponzi, scam, or the actual reply “weird things no one gives one hoot about outside of the crypto shill word [sic].”

You do have to love it because r/buttcoin has clearly upgraded to Hacker News. If that doesn’t say the dawn of mainstream is here, nothing does.

Because a lot are newly being introduced to the whole thing, so for some it is actually 2013 and it is natural to initially be sceptic.

Wait until they find out everything is a pyramid scheme, most of all fiat, which has an inbuilt ponzi through the debt creation of money that requires interest payments on that money creation itself, something that still now a decade on remains unexplained officially in regards to where does that interest comes from and what role does it plays in the fiat ‘blockchain’ so to speak, or tokenomics.

But that part can be excused because money and finance is very complex, and very obfuscated. You have to go through some huge mental gymnastics however to argue that “a way to authenticate yourself without a centralized authority” can be satisfied by “PGP, encrypted email, OpenID, etc etc..”

Even if that is so, you’d expect coders out of all to be enthused with the fact one method of such authentication is catching up when none other has despite decades of them going on and on about it.

They should be jumping up and down with joy that their views of how it should be are now becoming more a how it is, and of course all this is built by coders so plenty of them do jump up and down.

Not the laggards though, and maybe it’s for the better. Afterall, someone does have to do the cubicle work, and – however mean it might be and however much one might idealize otherwise – it is perhaps just so much the better that no self awareness at all is shown to wonder whether they are actually proving the fact it is still early by making 2013 arguments in this 2022 in an article arguing it isn’t too early.

We’d just wish the hive curation is more sophisticated to give us these signals in a more substantial form so that we have a bit of a better idea of what maybe can be improved.

The other reason is more a hypothetical. Things like Hacker News are communist in design in that there is no direct value measurer for exchanges there, but only indirect in potentially building up a name or marketing your startup or of course in just plane procrastinating or in trying to keep your cubicle workers in line.

There is no incentive for someone who knows some fault or what can be done about it, to just give it out for free when their knowledge gives them a premium in salary or their solution potentially billions.

So discourse is becoming a bit shallow and superficial, a de minimis effort that in communism generally leads to a collapse.

It isn’t clear whether crypto can solve this huge matter, but in some ways web3 can also be seen as a different sort of a social network.

It can be seen as Google’s Circles in an abstract way, if anyone can remember those, where group membership is curated through tokenomics so that there is an incentive to contribute at least above de minimis.

Unlike web2 where you have a many to many communication, including the many very dumb, and rather than thinking web3 means just a copy of Facebook, it may instead develop into a few to few communication.

Tokenomics, or community building, or the curation of information through the value exchange of units of account in an indirect way in as far as those that have the token or NFT have an interest in something that can be measurable in accounting value, may lead to more decentralized public squares whereby the interesting debates are more in coffee houses than in the town square, or at least in addition.

This is already the case of course and arguably always has been the case where you have groups, guilds or companies or universities, but not so much digitally at least for what feels like quite some time as web2 is designed to be many to many and is becoming more and more one – or ‘influencers’ – to many.

Time being the most valuable thing, any efficiency gains in its use must of course be very valuable, and money being the great incentivizer, leads one to at least wonder whether we may accidentally get some efficiency gains in time spending through tokenomics which may be creating different social dynamics that may be leading to a lot of the debate happening on Discourse and far more sophisticated Discourses to come.

Some perhaps will hate that, but for us at least one great promise of this space is the bringing of capitalism to all. That includes, maybe, the greatest commodity: knowledge. Which is of course different from information because some cow made three gallons of milk is very different from the Black-Scholes formula.

And therefore the problem with the lack of proper debate on web3 may actually reveal something fundamental about web2, namely that it does a terrible job at organizing information because it lacks proper incentives due to its communistic design, which perhaps web3’s digital value can provide.

The difficulty with seeing how in detail might also be what is encouraging, at least for us, because once we have the details, then what’s there to play, and because the many failures or wrong ends indicate the accumulation of knowledge through experimentation with many attempts to directly incentivize curation when it can perhaps be organic and still incentivized, but indirectly.

Knowledge, which is clearly bugy to update or is inefficient to transfer at least where known capabilities are concerned, and thus makes it all fun because it suggests it is still too early and we have not been Septembered yet.

Maybe we will one day as natural capabilities are consumed and saturated with novelty being the game of man, but until then, it appears somewhat self-evident that we do still have to taste a lot of novelty, at least compared to as of yet non-existent alternatives, with such novelty now very much dead in web2, while it may be just about born in our web.