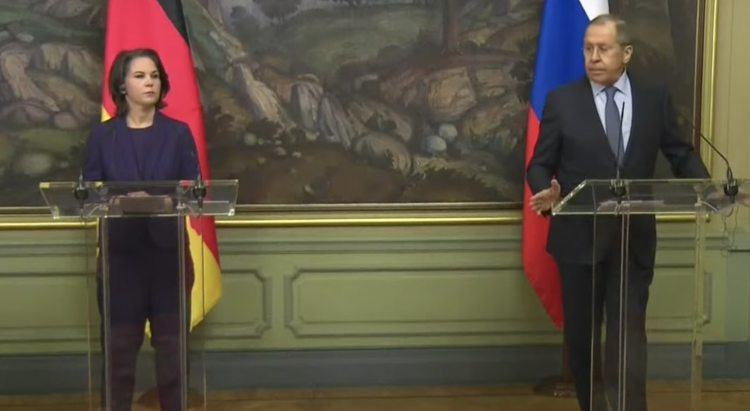 Russian bonds are taking a beating, opening a 270 points gap with US, while Ukrainian bonds are down some 19% with a gap of 1,000 basis points, the likes of which are only seen in places such as Venezuela.

For bitcoin however, much is quiet with the currency seemingly not responding to the tensions on the Russian-Ukraine borders, even as the British Defense Secretary said this on Monday:

“We, and our Allies, have legitimate and real cause for concern that the configuration and scale of the force being assembled, supported by Russian air and maritime long-range strike capabilities stationed in the region, could be used for the purpose of conducting a multi-axis invasion of Ukraine…

We have taken the decision to supply Ukraine with light, anti-armour, defensive weapon systems. A small number of UK personnel will also provide early-stage training for a short period of time, within the framework of Operation ORBITAL, before then returning to the United Kingdom.

This security assistance package complements the training and capabilities that Ukraine already has, and those that are also being provided by the UK and other Allies in Europe and the United States. Ukraine has every right to defend its borders, and this new package of aid further enhances its ability to do so.”

The Kremlin said it is awaiting a written response to its demands of a guarantee that Ukraine will not be allowed into NATO, with a joint Russian-Belarus exercise to begin next month.

Any speculation in regards to potential German weakness may gain further nuances today as Annalena Baerbock, their Foreign Minister, maintained a stern composure (pictured) during a press conference with her counterpart, Sergey Lavrov, in Moscow.

“There will be no security in our joint European home if there are no rules everyone can rely on and we have no choice but to follow them, even if there is a high economic price,” she said.

Lavrov for his part, beyond the usual Ukraine aspects, said: “We and Germany both have a joint interest for the situation in the Balkans to develop according to a positive scenario.”

Ethnonationalism, was the charge of UK’s Secretary of State for Defence Ben Wallace towards the 20 years long ruler of Russia.

“We should all worry because what flows from the pen of President Putin himself is a seven-thousand-word essay that puts ethnonationalism at the heart of his ambitions,” Wallace said.

That ethnonationalism has been rising in Bosnia too, and some say in Serbia, with UK clearly asking where does Putin’s ambition end.

Ukraine thus may be a red line, with US and Russia accusing each other of planning false flags, yet little feels quite ”real’ with bitcoin saying nothing is quite happening.

Markets may be wrong of course. They’re perhaps just ignoring the boy that cried wolf so to speak with it now the second major time that Russia amasses huge numbers of troops near the border of Ukraine.

The last time in April 2021, bitcoin seemingly responded. Biden met Putin, and they said let’s keep talking. Is this that ‘talking?’

Presumably as talking continues, there won’t be quite a proxy theatre with Lionhearts and bears, more just TV theatre with donkeys.

If that changes, you’d think bitcoin will be the first to know due to its 24/7 trading across the globe, but – if there weren’t other factors and there are far bigger factors currently affecting bitcoin’s price – it may be the opposite of what the public is being told is actually happening as bitcoin is falling a bit in price, suggesting tensions are reducing not increasing.

The ‘diplomacy’ on the ground is perhaps just the cards on the table and maybe what’s going on is historic dialogue that perhaps sends the bear hybernating as maybe old grandpa chooses for once the economy first over the long gone past.

Yet that diplomacy on the ground may go into action if diplomacy fails, a failure that of course would be Putin’s solely as the right to self determination is not negotiable. Not in this Europe anyway where redrawing borders without legitimate consent has long been sent to history books.

Failure thus as it stands is not easy to foresee as England kind of checkmates, with the Canadians joining as they send some special forces too, and Germany will most likely have no choice if it comes to anything as the opinion of Europe is quite clear.

So bitcoin and the market are seemingly paying no attention, but one can hope that out of the negotiations more certainty can be reached in relations and Russia can become a more responsible European player because the alternative so far has meant a 50% cut in their GDP.