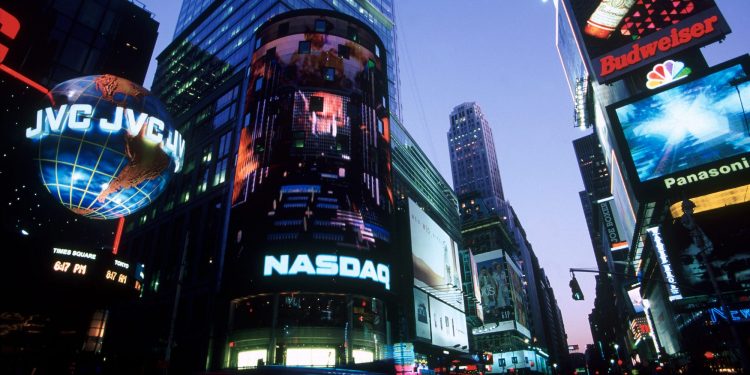 Bitcoin has been performing better than Nasdaq for the past week in a first since quite some time according to our observation.

Nasdaq fell by 2.6% yesterday. Bitcoin dropped by only 1%. Bitcoin is up today by more than 1.5%. Nasdaq is set to gain just 0.67% according to futures despite the considerable sell off on Tuesday.

Over the past seven days, bitcoin has dropped by just 1.26% while Nasdaq has seen one of its worse week since 2008, down 4%.

Instead of bitcoin following stocks thus, it may be bitcoin leads stocks as over the past 30 days, bitcoin is down by 9.7%, while Nasdaq is down by 3.6%.

One potential theory to explain the recent decoupling of sorts whereby bitcoin is performing better in a sign of a potential turning may well be that bitcoin led the downturn in November, and now may be leading the upturn.

That’s of course for time to confirm or otherwise, but a lot is starting to not make too much sense data wise where it concerns the narrative of the past three months, suggesting sentiment has perhaps overshot and is lagging.

Bitcoin No Cares While China Prints

Shanghai. Bitcoin fell during their trading hours, as did their stocks by 0.3%, with the China decoupling analysis so becoming a complex affair and an ever evolving one.

Far more perplexing is the fact CNY has strengthened against the dollar which has hit a new low of 6.338 CNY to USD, the lowest since 2018.

China is loosening its monetary policy while US purportedly is gearing up to tighten it, so the book says CNY down and USD up.

The book however often is wrong perhaps because academia bubble takes forever to update, with it not the first time that tightening means weaker fiat and loosening means stronger.

This magic is perhaps due to expectations regarding economic growth, or PBOC is engaging in shenanigans and we don’t know, because stocks should like growth and therefore they should be up.

A strengthening CNY should also hit exports, which may translate to a further slowdown rather than growth, and thus CNY should weaken, but unlike the dollar, this currency does not free trade on the market as it is tightly controlled by PBOC, and PBOC so far has been happy to let it strengthen.

That’s maybe because it makes imports cheaper, but with the whole property mess in China that probably will eventually extend to their financial sector, you’d think bitcoin would be a very attractive asset regardless of the little movements of CNY.

A CNY that stands for complications as fed moves to raise interest rates. Something bankers are loving with Jamie Dimon apparently dream fapping to 8 or 9 raises this year in what makes delusional bears or bulls seem very sane.

From Free Money to Almost Free

“‘Nobody is Shorting the Equity Market’: Over $30 Billion Went Into Stocks Last Week” says BofA Chief Investment Strategist Michael Hartnett while advising his clients to short.

What these rascals are up to isn’t clear with only sheep taking advice from wolfs, but they clearly loving this sky is falling nonsense over a 0.25% interest raise or even 0.5%.

In Bubble Trouble Japan, great documentary, 2.5% was ‘free money.’ Yet banksters want us to think 0.2% is the end of the world.

That’s perhaps because they have an open ledger and can see exactly what everyone is doing. One such thing being pension funds and other big money rebalancing at the end and beginning of the year.

It may well be that rebalancing which might be contributing to a lot of red, and of course who doesn’t want cheap assets when they trying to buy them. So short they say while probably scooping it all up as the episode is maybe nearing the end.

That’s especially if growth keeps on. UK’s GDP is now bigger than prior to the pandemic in an amazing feat of fi-conomics, finance and economics.

After the last pandemic almost precisely a century ago, there was the roaring 20s with it unclear why there shouldn’t be one now too as labour gets compensated better and thus has a lot more money to spend.

In that environment, some 0.2% when growth is maybe even 5% is not even a dot in the ocean, so bears maybe are becoming a bit exuberant.

That’s especially when you consider a fixed asset like bitcoin is a good hedge against inflation, and where stocks are concerned, inflation makes debt cheaper while lubricating profits as it’s a sign people are spending, and thus the economy is growing.

Stagflation would be something else, that’s no growth while inflation is high. But some inflation with a decent growth rate may just mean everyone is making money.

Sentiment however plays a role in valuations, but price does guide sentiment. Thus this outperformance by bitcoin may well be a price signal that maybe a turn is coming.