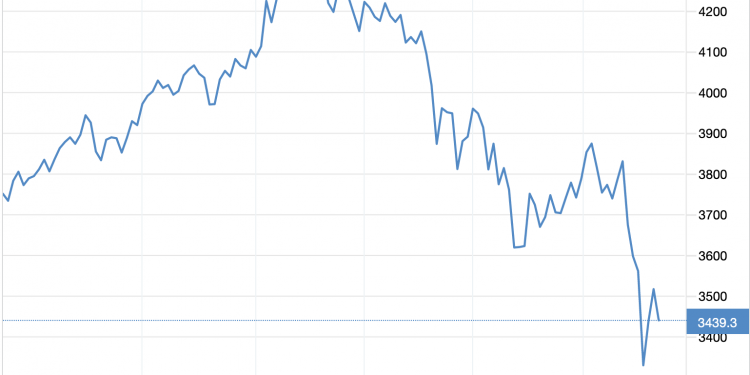 Tensions between Russia and Ukraine with speculation intensifying about a potential intrusion might add more pressure on their stocks on Monday.

US has drawn up all sorts of plans, including sanctioning chips, with Europe likely to hit their banks if they invade.

Gas revenue would plunge as Germany might be left with no choice, potentially sending Russian bonds pluming, with Qatar apparently to come to the rescue to fill European demand.

US may further move to ban the buying of Russian bonds completely, making it more difficult to service their debt.

China is their single biggest trade partner with $49 billion in Russian exports and $55 billion in imports.

Europe as a whole however is far bigger with $140 billion of Russia’s exports to the continent and about $70 billion in imports.

Russia thus sells twice more to Europe than Europe sells to Russia. In addition, the European market is some 10% of their GDP, while the Russian market for Europe as a whole is just 0.5% of their GDP.

European sanctions therefore would put huge pressure on Russian markets with China unlikely to assist much as they sell more to Russia than they buy from them.

Russia denies it plans to invade however even as it mobilizes its navy. If they do, it would be the first time since Hitler that such invasion would have occurred in Europe.

But for now diplomacy is still on, with it unlikely any action would be taken next week prior to Putin meeting Xi Jinping on the 4th of February and Erdogan “at the beginning of February.”

“Ukraine is not an ordinary country. Ukraine is a powerful country. In addition, in order for Russia to take this step, it needs to review the situation in the whole world and its own situation,” Erdogan said earlier this week.

Ukraine’s GDP is as big as Greece at $185 billion, with Poland, Russia and Turkey being their biggest export after China, while Germany is their biggest import.

Suggestions are Putin has not made a decision yet, not least because it would be a big gamble with war usually full of surprises.

Wider markets have also had a jittery few weeks. Initial concerns over Omicron may have now eased, but that might be giving way to re-pricing the non-pandemic economy.

A slowdown in China is on the surface seemingly being met with an ineffective response. Just how much that will affect western stocks and the economy is to be seen, with it potentially making US and European goods more competitive as CNY strengthens.

The talks of tightening have not quite led to much dollar strength which has come down from 97 in November to DXY now standing at 95.6.

At the same time bitcoin has fallen, reking down to currently $35,400. Much of it probably based on sentiment alone as short sellers exaggerate the speed of a potential tightening.

Monday’s open therefore will probably be followed with a greater interest than usual as traders want to see whether there’s a correction bounce or capitulation.

The good news is that many stocks are down 60%-80%, with PLTR for example not having much to go until zero, so at some point the selling fee might overtake the value.

Also Ark invest is pretty much bankrupt, with their ARK Innovation ETF down 51% year to date, so at some point you’d think bears will have nothing left to eat.

But if we are there is of course for Monday to say with it not too clear what these big whales in stonks are up to as SEC of course keeps sleeping at the wheel while short manipulators have a field day with Jamie Dimon bonkeringly saying there may be 8-9 rate hikes this year. Or 100.

When it remains to be seen whether there’ll be one to begin with, and when, and when the Bank of England raise wasn’t so bad for UK stocks anyway.

So speculation might be getting a bit detached from fundamentals, but for how long it continues is to be seen.