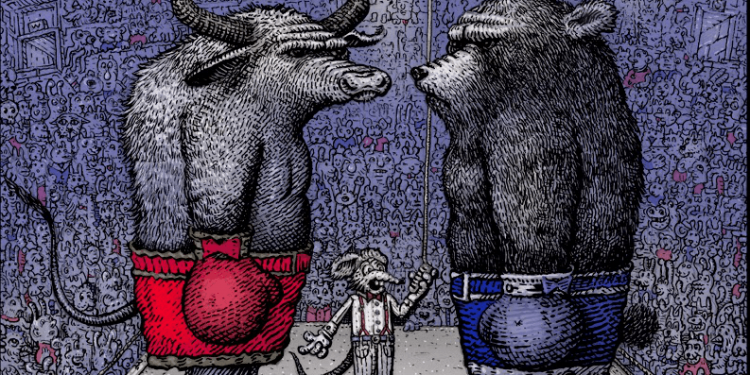 Bitcoin has reached its lowest price level since July, with it currently standing at a big support line of $35,000.

Plenty thought $39,000 would hold, and then after stocks rekt, that $38,000 might be a base. But stocks rekt again and so we stop just slightly above the previous low.

Slightly here being about 20% above the just lower than $30,000 we saw during summer when bitcoin had some nine weeks of ranging sideways:

This unusual bitcoin pattern on daily timeframes hasn’t quite been seen before. It looks a bit like a camel, which may well mean that it doesn’t quite tell us anything.

$100,000 so being a very big number, it ranging at these levels is perhaps not too surprising as a six digits asset is quite something.

Something that might give comfort to more long term holders that this is really going to $500,000 because its held its value, at least so far, and is behaving as you’d expect for an asset that maybe is eyeing $100k.

Another interesting aspect for those that have been around for some time may be that this range is crystalizing 5 digits.

Now, nothing can be certain with such things but bitcoin used to feel quite expensive at 5 digits and we all used to be a lot more comfortable with 4 digits in the last round, while now five digits feels pretty comfortable.

Obviously if we get a proper ree totes rek, we may even briefly 4 digits, but presuming we would 5 digits again, then that would only crystalize further the comfort with the 5 digit asset.

This digits theory may perhaps even explain the no $200k in this bull run. That maybe underestimated the resistance of crossing six digits, which is clearly bigger than crossing five digits.

If that is the explanation, then there’s a hungry bull so to speak even during bear, and so we may not get complete devastation but more a nice rangy rangy to $100k.

So where feels are concerned, the biggest of bears say $19k is bottom. Those long enough may know during bear to expect worse than expected, so it may 4 digit, a brief $9k. Those long enough however also know to expect it mewn. So why play little digits when six digits might be comming.

Traders will and many may get burned, but the sell pressure may be lower than before because so long at 5 digits suggests we might 6 digits and if we four digit then it would look very cheap.

Unless of course everyone packs their bags and we all done here with everyone going back to useless gold which you can’t even use to transfer funds, and all that interest yield on defi platforms is no longer free parking.

Presuming the asset instead keeps being an asset, and keeps being useful for all the things it is useful even now – let alone for what it might be useful in the future as innovation goes on – then someone who previously would have sold at these levels due to the absence of balancing prior information that we now have, might not sell.

Thus the bottom might be smoothened out, as was the top, and thus we get a more sidewaying big range to get comfy at these levels so as to overtake that very big number in a comfy way.

Anything can happen though, and we’re not going to answer the title question because no one can precisely pinpoint such things, but from a bigger perspective such movements may be irrelevant in any event if our theory is right that such a big number requires a bit of getting comfy and it’s that comfiness-ning that may explain the range so far which may continue, or obviously may break out in either direction.