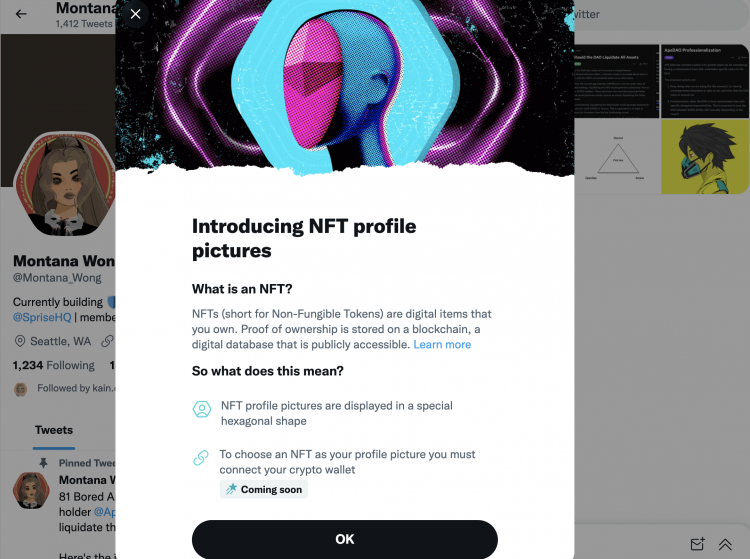 Twitter is now connecting to the ethereum public blockchain to show verified NFTs on your profile.

The feature is gradually being rolled out with it currently live as can be seen above. Making it the biggest platform with 330 million active users to integrate the public blockchain.

If you NFT, your profile will be differentiated by it being shown in a hexagonal shape, rather than the usual round.

You have to connect your public ethereum address to NFT however, and that can come with its own problems as you’re associating your eth address to your identity, although Twitter profiles can be pseudoanonymous.

Montana Wong, a blockchain dev that clearly NFTs, has linked her live Twitter profile which means we can see her eth address at the top right corner.

It’s not too clear what exactly is going on here however as on OpenSea the address Twitter shows us doesn’t show as having any NFTs.

OpenSea gives us a different address which doesn’t have much eth on it, about $5,000 worth, including tokens.

As shown in the featured image we weren’t given the option to connect ourself and see how it works exactly.

Presumably you link your metamask, suggesting Twitter is getting a Web3 dimension at least where profile pictures are concerned.

Facebook and others may also follow in connecting to the blockchain infrastructure, which could later on be expanded further to take advantage of other ethereum capabilities.