The Super Bowl Halftime Show: Why NFTs Are Roar 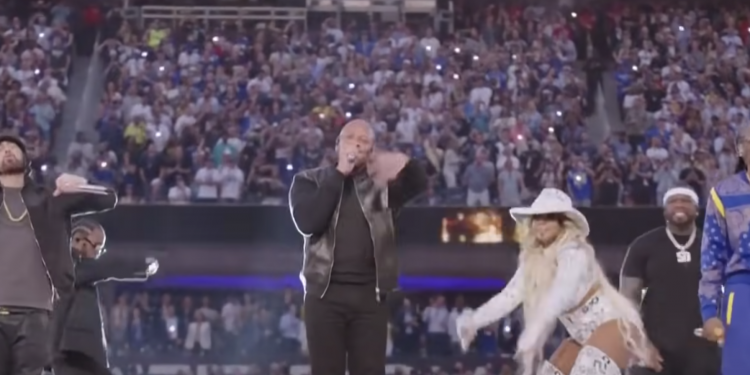 2022 was more 2002 during this year’s halftime show at the Super Bowl where the ragy Eminem, the so 2004 Go Shally 50 Cent and the 90s California Dr Dre took the stage to still entertain.

They missed the trick of waving a Bin Laden effigy however to make it proper early 2000s as Americans were sent back to a long gone time with these hasbeens that sang not one new song, replaying the ‘escape’ message instead that teens used to hear.

Apparently they paid some $7 million to Super Bowl to be put on halftime, with the big question being what exactly were they selling beyond white pianos.

In front of 100 million viewers, music matters, as do its messages. There is no other message here than America is stuck in time, at least culturaly.

The endless replays of Superman may attest to it further, however much fun they still can be to watch. Lazy entertainment, but is it by choice?

The Capturing of Culture

The lack of dynamism in music and film is a byproduct of financial control in money and fundraising.

The Hollywood Banker is a very interesting documovie on the matter detailing the key role that banks play in financing film, as well as their decisive power.

The process is somewhat simple and maybe even familiar to this space. You get a script and a cast, you get assurances from distributors they will distribute the movie once it is made, and based on those assets you get an upfront bank loan which is further insured in case something goes wrong with production.

This is a security, the Securities and Exchanges Commission (SEC) would say. It isn’t, to anyone with some reasonable intellect. It’s investment in value creation with risk management at its finest. Any argument to the contrary is simply saying that banks should have monopoly and total power over culture itself, which is of course unacceptable.

That power begins with the simple decision on whether to fund such independent movies at all, and ends with the very detailed decision on, if a banker so wants, whether some line or word should be included in it at all.

Total control in effect, and if you don’t like it, you don’t get your movie, with the bankers so able to instantly and at will make anyone famous, or indeed no longer famous.

As long as this works it is fine, but currently it is clearly not working. The problem is concentration. Bankers are humans, and of course to do something like this you need the skills and expertise as well as experience and there aren’t many of them.

Jealousy, envy, ego, and simple power competition, can interfere especially when that power concentrates to abuse. A whole sway of culture can then meet its downfall with the downfall of one man to never recover as Hollywood starts becoming a bit rusty.

So thus enter NFTs, stealthily, swiftly, nimbly, just a jpeg on the surface that nonetheless underneath have the power to strike to the heart of any choke on culture.

The system currently is no where near as sophisticated as a Hollywood Banker may have, but it does have the base to build towards the same thing.

The NFT collection where there’s 10,000 of unique tokens allows for that role of the banker to be replaced by your $100.

Now there’s no longer one man, but all men that fund music and film. Thus you see in the digital space unique and beautiful art or experience unlocked by this lack of barrier.

A baby however can’t walk and NFTs are at the same stage where they can barely move their lips, but gradually they will develop, and young bankers might even be the chief drivers of it because they know better than most what is wrong with a lot of things.

So it may take time before our work here is reflected at the halftime show, but since we’re still at 2002, clearly we have two decades of free reign to begin the shift in liberating finance through tools where code sets the rules to allow anyone to participate.

Automating that Hollywood Banker through NFTs thus, should revive once again genuine creativity where art or culture and its creation is based more on meritocracy rather than the whims of a man.

It’s a tool in short to bring back this utterly important matter under public control and the forces of the free market, rather than the dictations of some faceless banker.

Which is why NFTs have been booming, and will probably keep doing so and might even roar as fundamentally they are about liberty itself.