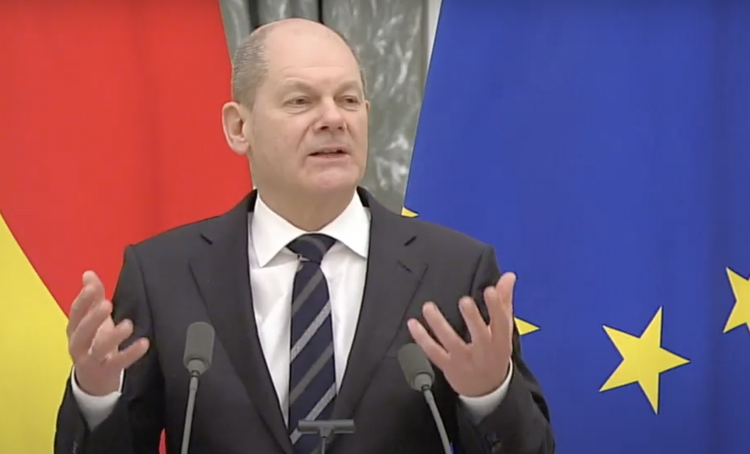 That follows the withdrawal of some Russian troops from the Ukrainian border after Russia’s president Vladimir Putin was advised on Monday that some exercises had ended.

He was told however that it would take some time to wind down the very large nation-wide drill he called in December, thus observers remain cautious regarding whether this means the tensions are coming to an end, with Ukraine saying they’ll believe the troop withdrawal when they see it.

Ahead of the German chancellor Olaf Scholz arriving in Moscow, Putin was also publicly advised that there is room for negotiations, with US Secretary of State Antony Blinken and Russia’s Foreign Affairs Minister Sergei Lavrov getting on the phone according to the US state department following Scholz’ meeting with Putin.

Our generation can not imagine war in Europe, Scholz said, demanding a de-escalation and that “no war will follow.”

“War has become unthinkable in Europe and we have to make sure it stays that way,” Scholz said before emphasizing that Ukraine’s sovereignty is non-negotiable.

The Russians appear to have obliged at least to some extent with the press conference between the two heads of state reminding one of what Bismarck once said: “politics is business.”

There was much business to discuss, Putin began saying while pointing out the billions in trade between the two nations.

Pictures of that long table have Scholz jolting down notes like some official while Putin talks.

‘What was your question again? I have notes here but they’re all scribbles’ Putin said to a journalist.

Making this the first time in a long series of conferences that Putin has given with world leaders over the years, where it was Putin that seemed to be a bit less than in top form.

Hours before, Ukraine’s president Volodymyr Zelensky had shown defiance. Instead of trading away his country under the most immense pressure that we have seen recently, instead of running away or bunkering like some of his countrymen, he announced the speculated day of invasion will for Ukraine be the day of unity, tomorrow, this Wednesday.

That to this generation shows brave men willing to fight and die for liberty are not found only in books, for two of them live and breathe today: Zelensky in Kyiv and Alexei Navalny in Moscow.

Ukraine should now be rewarded, and while they can’t get Nato with forever Presidents, they should begin the process of integrating with the European Union, which also has a defense clause, and against which Putin can’t say nothing because the Russian people would never buy the argument that Ukrainians should not get rich by having free trade with Europe.

That said, plenty of troops and equipments are still at the border, but Scholz said an invasion of Ukraine would have strategic consequences.

We know what we will do, he said in such instance. Everyone knows [looking at Putin]. We… we know.

And with that, this chapter perhaps ends while a new one maybe begins. We’ll of course call it The Elf of Europe, presuming it goes well.