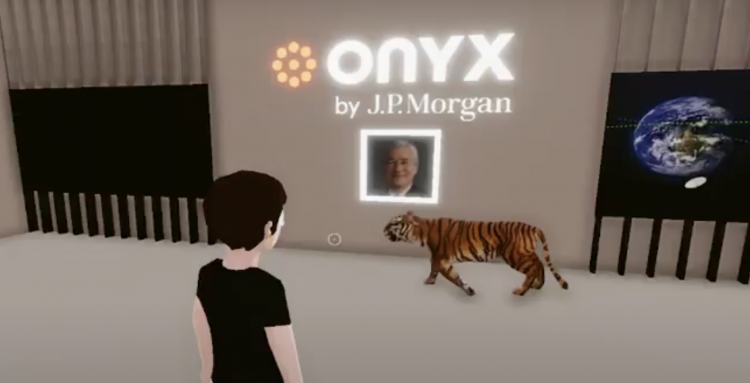 The first premises on the metaverse by a long established giant global bank, JP Morgan, have opened on Decentraland, the ethereum blockchain based metaverse.

We naturally went to explore what can be called a 3d website of sorts or a virtual booth focusing on crypto and defi.

The first thing you see is a giant tiger roaming around, as if to say welcome to the tiger’s den, with the tiger seemingly protecting a very web2 picture of Jamie Dimon, the JP Morgan CEO that has often dissed bitcoin, but nowadays seems to be getting more and more ignored at the bank.

The JP Morgan metaverse environment has some in-premises videos that appear to be interesting if you have the time, generally crypto or defi talks from conferences that had to compete with other enticing buildings in the surrounding where we also roamed to the point of it starting to get a bit addictive.

They also display a nice infographic detailing their work on blockchain since 2015. Missed a few tricks here because it’s a very 2d infographic in a 3d world.

With a bit more work, one can easily imagine a lot of experiences that can be built with that 2d graphic in the metaverse.

An interesting one would be the satellite crypto payments they’re claiming, which we had not heard of before. You could easily get a rocket here sending you to the moon and an avatar demonstrates and shows you what to click on your virtual phone and maybe the avatar goes back to earth while you’re in space and so makes the payment.

That obviously would be a lot more work and would cost a lot more than copy pasting an infographic at hand and some videos that probably already are on Youtube with the expectations that people will come to watch a tiger roaming around, and because of course JP Morgan.

Which shows they’re not quite taking it seriously and, if one wants to be a bit cynical, they’re effectively claiming this 3d is nothing more than 2d.

Even with that very limited perspective however, we now have some nice videos to watch to put us to sleep when before we would have not even known JP Morgan has crypto videos, and if we wanted to generally search we may have spent a lot of time to end up being dissatisfied because curation in search with so much out there may be now more back to basics with shop displays.

That’s on the info side. You can also act on the web of course. There’s… well, all global commerce is now pretty much digital. They could have told us about stock accounts, or crypto accounts, some AI bot could have answered any questions one might have, on their 2d site they can link to an actual demo on the 3d metaverse. They can even have a 3d terminal with all that info and zooming in and out, all that wizz. Would it translate to the bottom line though? Well, that’s the spaghetti on the wall part.

You can’t expect much in the beginning than a paper scan on a digital website however, or in this case a 2d scan in a 3d environment, but if one is serious then the question they would have to ask is what does 3d provide that 2d doesn’t.

That would be a scientific question, why are humans 3d? Why not 4d or 2d? We don’t know the answer. We suspect, fundamentally, it’s because 3d allows for discovery and thus randomness and so creativity and even creation.

It also presumably allows for far faster absorption of information and far greater memorability, as well as ease of movement and command of the surrounding environment.

An image is a thousand words, but until now the image has been limited to 2d, and even that used to be very rare in skilled paintings. With TV animation you can 3d, but a world that you’re not in, a static pre-planned world where you have no say, and thus you can’t control the sequences of events, or what part of it you watch. It’s a 3d world in 2d. Your choice is on or off, with the metaverse you have the whole rainbow.

As it’s a very new world, you begin with what you know and here we have a 2d world in 3d, which is fine as at least we have something.

But in a decade hence or two, you’d think all the opportunities and capabilities will be wrapped out to the point where a new medium is a new tool and the complexities of information are condensed in visual representations that give you the knowledge you need, when you need it, and with less effort than currently.

That obviously requires a whole industry with its own specialists, but we couldn’t do any of this even a few years ago.

The 90s games are within our lifetime, and we remember them. In 30 years, what has been refined in games in regards to 3d representation, is now reaching the point where it can be a whole world.

It has happened so gradually and so naturally that the very idea of a shop in 3d sounds like what’s the point, because we have forgotten we couldn’t do this before, and now we can, now we have this huge power of willing something from nothing in the digital real life-like realm.

That is to say, the metaverse is real. No where near fully developed, but in an information economy it may be one of the great leaps that looks like nothing while it unfolds, but when we look back it may well feel like the 20s are a different world.