Russian Banks at Risk of Collapse 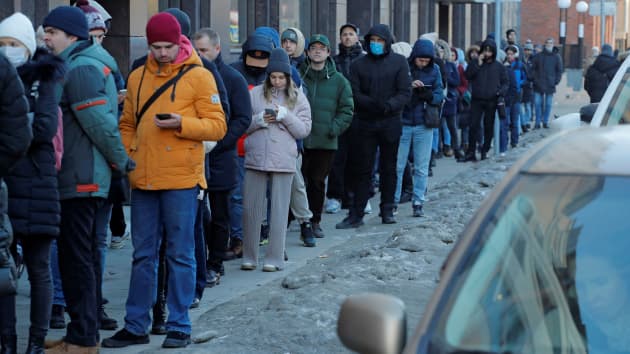 The Russian banking system is at risk of crashing down after being kicked out of SWIFT and sanctioned with a foreign subsidiary already verging on bankruptcy.

“Sberbank Europe AG and its subsidiaries experienced significant deposit outflows as a result of the reputational impact of geopolitical tensions,” the ECB said in a statement prior to markets opening.

VTB, one of Russia’s biggest bank, fell some 50% since October before being suspended from the London Stock Exchange (LSE).

Lukoil, one of Russia’s biggest oil and gas producer with yearly revenue of $78 billion, saw its stock crash 44% just today when LSE opened.

Rosneft Oil with revenue of $79 billion, fell 41%. Gazprom Neft, a subsidiary of Gazprom, fell 25%. While PhosAgro, which produces fertilizers, plunged 55%.

Stock trading in Moscow was initially delayed and then completely suspended for the day because calamity was expected on opening as sanctions are already beginning to bite.

Long queues are pictured outside banks in Moscow this weekend, including the featured image, as worries increase.

That’s especially following comments by the State Duma deputy from the Communist Party Nikolai Arefiev who, according to Russian media, stated that the savings of Russians could be confiscated during the economic crisis. That’s bank deposits.

“If they block all the funds that are abroad, then the government will have no choice but to seize all the deposits of the population – there are about 60 trillion rubles – in order to get out of the situation,” he said.

Russia is thought to be spending $20 billion a day on the war in Ukraine. That includes destroyed or captured equipment.

191 tanks have been destroyed so far in just 5 days of attempted invasion, according to Ukraine, as well as 29 planes and 29 helicopters, 816 armored personnel carriers, 60 fuel tanks, 74 artillery pieces, and more.

“The UK Government will immediately take all necessary steps to bring into effect restrictions to prohibit any UK natural or legal persons from undertaking financial transactions involving the CBR, the Russian National Wealth Fund, and the Ministry of Finance of the Russian Federation,” the British government said.

They cutting Russia out of the City with Europe and America continuing to dominate, and by far, in the global financial system.

The Russian economy therefore might completely collapse with pictures now showing you need 250 rubles for one dollar on the ground.

As an asset outside the banking system, bitcoin and other cryptos can protect from seizure in this sort of situation, but there’s been significant integration between bitcoin and stocks so two counter-trending factors are going against each other.

The ruble’s collapse on the streets and its plunge in fx markets increases bitcoin’s value, but the fall in stocks might lead to divestment from stock traded bitcoin products, giving some volatility in bitcoin’s price as once again now it rises to $38,500 after dipping to $37,000.