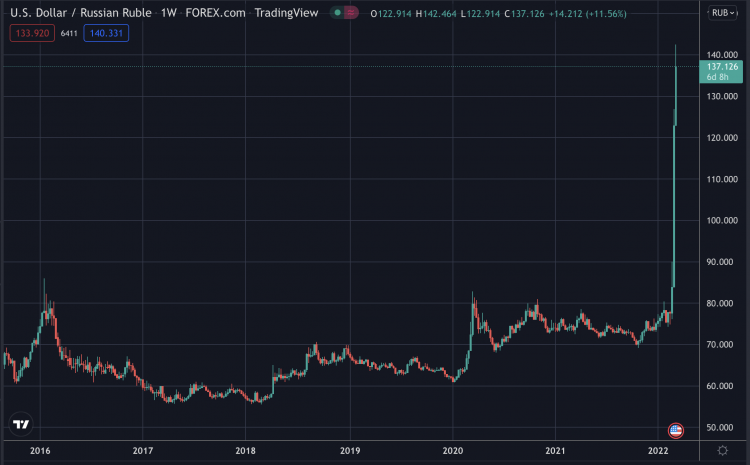 Ruble is down 50% since Russia opened war on Ukraine with it crossing 140 to the dollar for the first time in history.

The currency has lost another 20% just today in huge moves that makes all previous trading look like a blip.

This may send inflation skyrocketing in Russia to perhaps even galloping levels with ruble’s value set to go down further following a new decree by Russia’s president Vladimir Putin.

“The debtor can ask a Russian bank to create a special ruble account “C” in the name of a foreign creditor and transfer payments to it in ruble equivalent at the Central Bank rate on the day of payment,” the decree says.

You’d expect any such ruble to be auto-converted into dollars or euros, but if it’s a significant amount, say a billion, that will court a significant slippage.

So creditors probably do have the right to insist they are paid in dollars or euros if that is what the contract says, in which case the conversion loss would be born by the debtor.

Either way, where the ruble itself is concerned, this will put pressure on the price with it perhaps passing through 200 rub per dollar.

There were reports initially that on the ground, ruble was going for 250. So it may be it’s only around that rate when one might start thinking about whether it is stabilizing with it currently still falling very fast at the rate of 20% a day.

This might shrink Russia’s GDP maybe even to the level of Turkey, down some 50% from here in a calamity.

Russians however are seemingly not going towards bitcoin to escape all this, primarily, but towards gold.

Of course there’s some retail cryptoing and Russia does have some techies, but the population at large hardly seems to speak much english and is probably not too familiar with crypto investing with it maybe 2013 still for bitcoin there.

Alternatively, Putin began piling up on gold in 2018, so maybe he wants to keep pumping his bags and state entities as well as companies might thus be buying gold.

That might indicate the dump is eventually coming in gold because Putin will have to sell quite a bit of it to fund the war of choice.

Making bitcoin, arguably, a more concrete asset in this sort of situation, but bitcoin does have its own factors where price is concerned and Russians appear to be a bit too far behind to actually utilize it at a general scale.