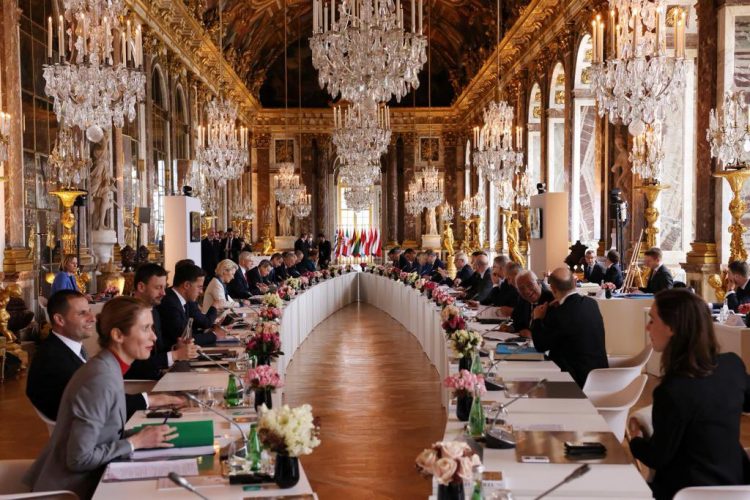 Bitcoin suddenly rose again above $40,000 from $38,000 on a fairly volatile day that had it dip again as markets try to figure out the direction this spring.

The United Kingdom has some good news in announcing 0.8% growth in January, far exceeding expectations of 0.2%.

“GDP bounced back from the hit it took in December and is now 0.8% above its pre-pandemic peak,” the Office for National Statistics said.

That has sent British stocks up 1.2%, but European stocks are up more, gaining 2.36%, including 3% for Germany’s DAX.

Why we seeing this green in Europe is not too clear, especially considering the size of the gains which are a bit unusual.

One explanation can be simply that stocks fell too much and so negativities are priced in with markets maybe now looking at what positivities they might have overlooked.

Some suggest that includes some comments made by Russia’s president Vladimir Putin today with Russian state media quoting him as saying:

“I will certainly inform you about the situation in the Ukrainian direction, first of all, about how the negotiations are going now, which are now being held almost on a daily basis. There are certain positive developments, as our negotiators reported to me. I will tell you about everything more about this.”

Germany’s former Chancellor Gerhard Schröder was in Moscow to talk to Putin with it possible that maybe led to something, but no one quite trusts a word Putin says anymore nowadays.

However, Ukrainians have shown fierce resistance with some saying Putin has already lost in as far as there’s now trenches outside of cities under siege and Kyiv still holds.

To move forward Putin risks the bickering chickens, mothers, Russian mothers who may well turn against it all with husbands and sons of course having no chance to withstand it.

He has also lost the information war. He’s the baddie and the only thing he had to argue otherwise was Nato.

Ukraine may now agree not to Nato, but they have received a declaration by all 27 EU member states that Ukraine’s future is in Europe.

With that huge prize for the Ukrainian people, for which they fought in 2004, in 2014, and since 2014, and now in a full on war since February 24th, one does have to ask can Russia realistically win in a proper meaning of that word.

Trade relations are frosty to put it mildly, but there’s a lot of room for them to get a lot more icy with movements on two fronts.

A fairly big one is what amounts to effectively kicking Russia out of WTO. That would allow for steep tariffs to be imposed on all Russian goods, with US certainly to move forward in that regard if the atrocities in Ukraine continue, but for this one Europe may well do too.

Then there’s oil and gas. We’re talking a billion dollars a day where Europe is concerned, the whole ethereum market cap in just a year.

Europe can’t cut off that immediately, but it certainly will to a large extent by the end of the year if Russia is still in Ukraine.

If instead they get out now, will there really be movement on tariffs as well as oil and gas to the same extent as otherwise?

And they can get out of course. They can easily say we succeeded in preventing Nato from being on our borders, and so mission accomplished. Or they can keep on being bogged down, but do they really think they can win against the whole world with the UN resolution making it clear no one supports them.

So logically maybe there is a way out, but whatever the outcome the big question is how is Europe changing.

The Halls of Versailles

Some astute observers may well have noticed that no one applied to join Russia’s CIS, but Georgia and Moldova quickly followed Ukraine’s application to join the EU.

A European Union that keeps looking forward, with European Council President Charles Michel stating it is all about defining the strategy for a more robust, more sovereign, more independent Europe.

Three issues will be key today at the Versailles summit, he said, namely energy prices, defense and technological innovation to create a more solid economic basis.

Italians are saying the continent will need to spend $650 billion a year just on the green and digital transition, with talks on joint bonds on energy and defense now less a consideration than agreeing spending.

“First it is necessary to agree on the need to fund industrial investments in the energy transition and in defense. Then we can design the best instrument,” said Italy’s Minister for Europe Vincenzo Amendola.

That matters have reached the stage where there are serious talks on these topics clearly indicates this is a very different European Union from even a few years ago.

It does still look like babies taking steps however, but it’s still a fairly big change because that baby is starting to gain its own cohesive functioning capabilities whereby it now can just about stand on its own.

Where markets are concerned, they seem to like it and very much because there should be a lot more efficiency when there’s continental level action and direction.

They might be able to even afford their own modern rocket launchers, or GPS, or modified and customized Linux operating system, and maybe even get to invent some tech.

They might be able to compete in short, and that’s necessary, certainly in regards to basic security but also for other nicer things.

Where this space is concerned, a big, rich and well functioning jurisdiction to give coders an alternative to mistakes that US bureaucracy may well make, would be very useful.

And only Europe can really provide that, so markets are clearly happy when the 27 can work as one body.