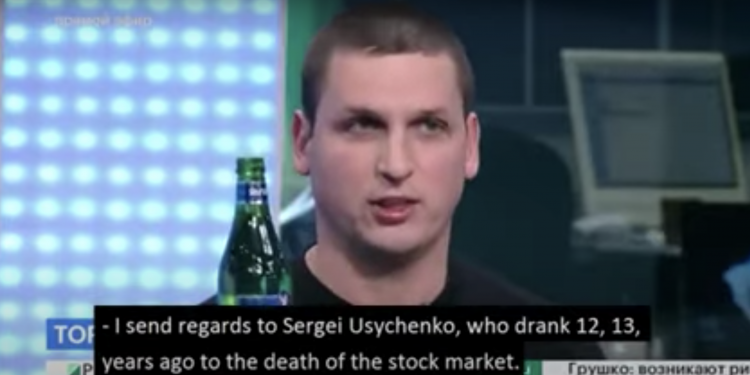 Bitcoin may well become the only game in town in Russia where the Moscow Stock Exchange (MOEX) is to remain closed all this week until at least Monday 21st.

Russia’s central bank stated MOEX will not re-open stock trading from the 14th to the 18th of March, making this one of the longest running stock market closure in history.

Its market capitalization, even after a 40% crash prior to the suspension on February 28th, still stands at $700 billion.

In those three weeks ruble has lost 50% of its value with numerous sanctions, both foreign and domestic, significantly affecting the value of the 219 listed companies.

To the point its market capitalization may well drop to $100 billion or less, at least briefly, with Russia’s GDP set to shrink considerably.

That’s when, and nowadays maybe even if, it opens. A hedge fund manager, Alex Butmanov, joked the situation is so bad he might have to start working as a Santa Claus.

He can’t even flip burgers at McDonalds because they’ve pulled out of Russia, so realistically all he can do now is flip cryptos.

“Dear stock market, you were close to us, you were interesting. Rest in peace dear comrade,” Butmanov said while raising a toast to the death of the Russian stock market.

There was nothing else to say. No speculation of how much Russian stocks might fall, whether they might bounce. “No words,” Butmanov said because there’s no market.

The Russian president Vladimir Putin is therefore clearly succeeding in bringing back a zombified Soviet Union, not least due to announced plans to nationalize a lot of companies that might close down.

There’s of course no such thing as journalism in Soviet Russia either as no one jokes nor toasts to the closure of the last independent TV station in Russia earlier this week.

So dies free speech: live, on TV. And they said the revolution won’t be televised, when we’re all watching live every single bit of a counter-revolutionary full blown revolution that has usurped democracy and has installed dictatorship.

Dozhd was one of the most popular TV station in Russia attracting 20 million views. Dozhd is no longer operational after 12 years of broadcasting.

A documentary by the BBC on their brief, yet long history, is their true last broadcast. It brings to view just how much the Russian people have tried to maintain liberalism and its whole golden formula of the enlightenment in regards to the rule of law and public debate, and yet just how badly they have completely failed.

They must feel utterly powerless, completely dis-emancipated, serfs that have replaced anger with acceptance.

And yet, is any of it really real? Denial is a powerful tool. There clearly isn’t here a collective to bring change, but individuals can act as if nothing quite has changed.

The machine is every single person. The judge that decides how to interpret the written law to fit the ‘reasonable man’ instead of the Putin hand, the civil servant that prioritizes what works for his neighborhood rather than the old new comrades, the workers that choose to labor or pretend to labor, the investors that analyze what investments bring real returns, the students that study that ancient dictum.

Dictatorship it is said sooner or later devolves into an aristocracy, the court of the king. Infighting among aristocrats brings democracy. That turns into oligarchy as the monied ones figure out how to play the masses. The masses tired with it all bring in a strongman once again.

To break this cycle of course you have the separation of powers and the checks and balances which merges two or more of these systems together so all are ruling, but none on their own.

Not in Russia. The cycle continues there. Another wave of their brightest exiling themselves is now ongoin. That optimism, that sense of boom where things can only get better until 2012 when Putin tore apart democracy and those checks and balances, has now inverted itself with the only question being just how much worse it will get for Russia.

“We have one guy – I don’t know who he is, but he came through a broker – and they’re like, ‘we want to sell 125,000 bitcoin’. And I’m like, ‘what? That’s $6 billion guys’. And they’re like, ‘yeah, we’re going to send it to a company in Australia’,” one unnamed executive told Reuters in regards to Russians apparently sending their wealth to Dubai through bitcoin.

“Crypto firms in the United Arab Emirates (UAE) are being deluged with requests to liquidate billions of dollars of virtual currency as Russians seek a safe haven for their fortunes, company executives and financial sources said,” the article claims.

Just an advert for “neutral” Dubai to attract investment perhaps, or the rich doing what everyone else is forced to do in Russia: left with no choice and no say, leaving the country.

“I like the global financial and banking systems. I use Apple Pay and everything like that. But in wartime, you have to make decisions very fast, and crypto allows us to avoid waiting days for bank transfers. So, you can immediately use the funds. So, we decided to create a crypto fund. We have several funds now,” he said.

Now three weeks on, they still holding strong because who in their right mind would want to go back to Soviet Russia, except the serf owners.

Yet Kyiv might fall, but would that dream of a free nation under the rule of law ever fall? Will they wait a thousand years, as the love song says, or will they prevail today?

That’s the biggest question of them all. Does man evolve? Does he have any other choice but to evolve?