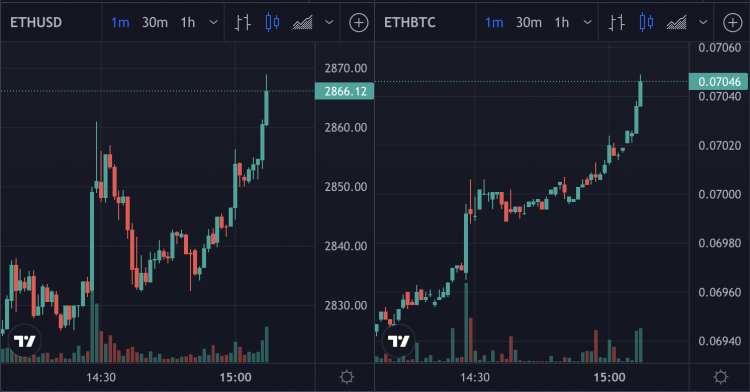 Ethereum’s value against bitcoin has thus risen (pictured above), above 0.07 BTC for the first time since last month.

Adding to speculation that ethereum may be leading the crypto market right now as it perhaps starts taking the show.

The latest reason for it may well be the Apes. They an ethereum token and have quickly risen as one of the biggest burner for the day.

The daily burned eth has more than doubled this Friday to above ◊5,000. If eth was full Proof of Stake right now, as it will be this summer, that would mean some 3,500 eth, worth $10 million, would have been taken out of total circulation today in a buyback of sorts.

Apes account for just 117 burned eth, so there has been a general rise in network demand, but that’s still enough to make them one of the biggest burners as the token jumps from $7 to $15 at one point.

They the biggest newcomer, and so are taking all the volumes, $5 billion in the past 24 hours with bear monkeys and bull monkeys fighting it out.

While in eth they win either way as the burning does not discriminate, with this Ape bullishness thus feeding into eth, not least because some may convert their apes to ethereum.

A bigger theme for this potential current bullishness in eth however may well be the merger.

That will bring a circa 2.5% inflationary difference between eth and bitcoin for the first time ever as ethereum will go deflationary at -0.5%, which from the data so far may well be the base minimum at 2,500 eth burned a day, with that varying obviously to potentially even a yearly -2% of the total supply during high network usage.

While bitcoin will stay at 2% yearly new supply until 2024. So causing a big difference that needs to be priced in.

Yet pricing-in isn’t very easy in crypto, but there’s still some level of it, just sneakingly slow to not wake up the masses.

That may well be because not many quite know about the merger, with our out of thin air estimate being that maybe 10% of crypto holders are aware, 40% of eth holders perhaps being the very higher end.

Then there’s the other sort of information asymmetry: just what does it mean for miners in one block to no longer get rewards, while stakers start usefully getting them at the rate of 10% miners would have gotten.

12k eth a day basically disappears from active market participation, as well as from new supply.

How do you price active? If this was eth holders, there would still be an effect obviously but is very different from price setting eth that takes part in the market every single day.

Here we have better data, though for bitcoin, with about just 5% of the total supply taking part in the market in every single month.

Currently for eth, 4% of total supply goes to miners every year, and so potentially we have a huge event that affects the raw price setting mechanisms because miners usually sell this eth daily.

They also save some to level out volatility, with it usually taking about three months for supply changes to be felt in bitcoin partly because miners can’t spend their coins for 90 days after they are mined.

We can’t recall eth having such cooling off period and a surface search reveals nothing informative, but still miners should have some savings and so there should be some delay.

However, miners will no longer have costs after that block number 1337 (leet), so it should be a bit different than bitcoin halvings where savings might be used to smooth out that sudden revenue drop while costs remain the same.

That’s because both revenue and cost will just vanish for miners. They’ll thus become either holders, stakers, or market participants. Irrelevant.

All this however still tells us that something will probably happen, but not quite what exactly where price is concerned.

So we’d have to make some assumptions. Ours being 4x because it may well be that much that is taken out of price setting markets a day, and that’s for the initial price adjustment with the daily 1k-3k burned eth (from total supply) then needing its own daily pricing.

There are probably math wizzes that can do a lot better than us in getting a more refined model however, but for everyone else, it all basically means buy.

However, we can’t say that because there’s many other things to consider, including that eth does what it wants, with the unknown here being demand but logically you’d think if supply is changing so drastically, that should affect smart demand and so should increase that too.

But, bitcoin can decide to make a mess and this sort of supply change in a top crypto has not happened before, so there’s no certainty in this sort of thing, only probabilities, and ours is that buybacks are coming.