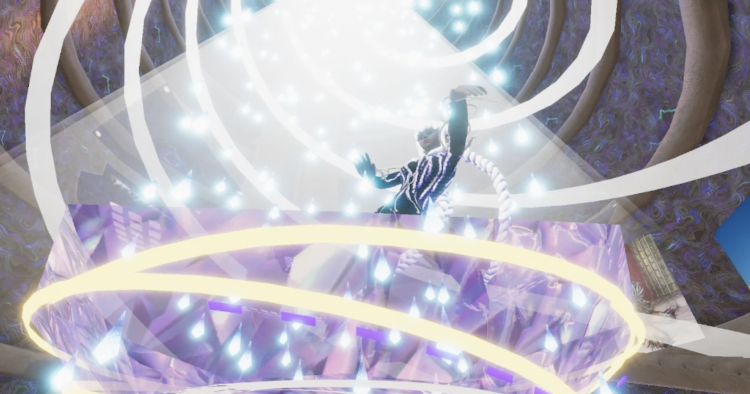 Grimes, the ex-girlfriend of Elon Musk and an artist in her own right, may have well given the Metaverse that 1984 Steve Jobs moment.

In a light lit half an hour show, the first of its kind debut had the audience sometime wondering is she live performing.

She wasn’t. The technology is not quite there, but in showing where it is, she may have made a bit of history in a performance that tracks just where the capabilities of the metaverse stand.

The organizers describe the performance as Grimes being “accompanied by AI integrations.”

What that means is anyone’s guess, but there are moments when the movements are very human.

There are also glitches, showing this isn’t quite a 3d avatar in the computer as we know how to do them excellently.

Instead there’s a blending of a live human representation, and her digital mirror. Though it isn’t clear whether there was a motion capture, or a mocap suit involved.

Some even joked this is just a showcase of new emotes as there is some significant extra-human repetition.

Yet compare it to the Paris Hilton performance a few months ago, different styles and now looking back the difference does not seem light years anymore, but there has clearly been some advance.

And that’s in some ways what these performances are, of advances. Techno-art as one might call it, for this is as much technology as it is an art showcase.

With the emote jokes, it can even be a business showcase, buying these dance moves. Or dance mixes.

Compared to the days of street dance, that could potentially revive the dance scene itself which nowadays feels a bit dead.

In the Grimes performance in fact, you could potentially even follow along with the dance moves in real life after you’re sufficiently mesmerized.

Where the music is concerned and the artist herself, this is the first introduction of Grimes to us and we presume to many.

She has been known as just a name, as the girlfriend and then ex of Tesla and SpaceX founder, Elon Musk.

Yet in this performance, she comes out as an artist in her own right that forces you to dance eventually through a chill but very vibe tone that makes you move.

Of course seeing it live would be a more refined experience, but the question is: was it better than seeing it on TV or on a Youtube video?

A difficult question as there is a difference which we can’t easily point out. There’s a difference in what angle we take. Initially, we were a few steps lower and from there it felt like this could be a live performance. From the view we have recorded above, you can see in more detail and therefore aspirations are lowered to more: what sort of ai integration was there.

As the performance itself shows, there are also different capabilities from a staging point of view.

The costs of a live performance are so high that we have a very rigid script, an elevated stage, a microphone, and the audience behind a cordone.

In a 3d digital realm, one has the opportunity to at least briefly ask what is the audience, where, what are its capabilities, and how can we thus increase that wow and immersive experience.

That there is such opportunity suggests there is something new which allows us to experiment. Currently we’re at the replication stage, getting the capabilities to get nearer mirroring the real world performances or displays. But people can not fly in the real world, they can not jump from high without a hitch, they can not move their vision 360, and they can not teleport anywhere in seconds.

Some of that is shown here. The stage is floating, we have to climb some stairs from which we sometime fall as they’ve artificially made it difficult to climb them. There can be many people in exactly the same position, although it can get crowded but you can always change realm to get rid of everyone.

Because of some of that, this is an historic performance. It is the first of its kind, and like evolutionists try to track those bridging monkey-humans, if anyone bothers in the future this could be one bridging techno-art performance.

The mid way between what can be done in this very present, and what likely will be possible very soon: an actual live fully dancing performance of an avatar representation.

There’s someway to go towards that, and in the twilight we are in this very matter, there are of course plenty who may be hesitant, hostile, or just question what they might see as replacing replication of an actual live performance.

Grimes herself ends with “try another game.” But is it a game? Games are scripted, like a movie. There is no human agency, there is no mass creation.

This is more or can be a representation, a new medium that feels like the others, like a game or has videos in it, pictures, a dancing Grimes avatar, but none of it is scripted in as far as a dev studio has complete control over it.

Instead, anyone can put up whatever they want as long as they can afford to buy or rent the land and have the skills.

It’s also of course not real life, and until now the only thing we had to describe it was games, from which it has developed and is metamorphosing into something different from both real life and games: the metaverse.

Something that has just began, and something that is beginning to show how some fields can be revitalized by this new medium of creation, while new fields are born.

Like techno art we’re displeasingly calling it as techno has some established meaning already, but a fusion of technology and art is clearly dawning.