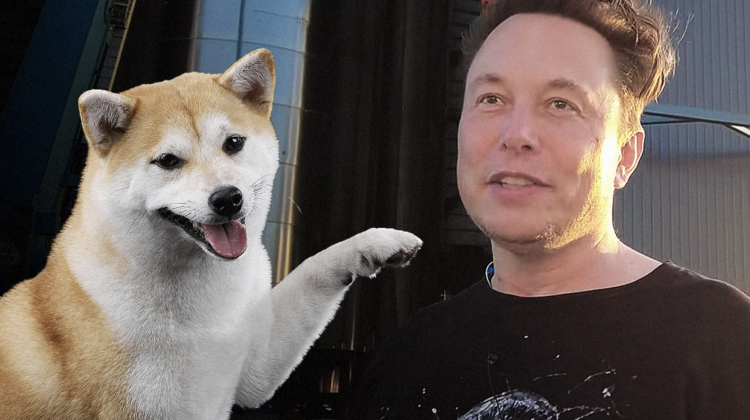 Elon Musk, the self proclaimed meme lord and doge father, has landed on Ukraine to celebrate the retreat of Russian troops from the now legendary city of Kyiv.

The surprise visit was preceded by a super secret mission to get the richest man on earth, and one of the most influential of this generation, into a war zone.

We managed to get a picture of Musk, and what looks like a doge, in what appears to be a space costume though it might be just safety gear, making their way to the eastern borders of Europe.

He landed overnight to a warm welcome in front of a select group in an area that seems to be the background of maybe a rocket landing?

We’re not aware of any such site in Ukraine, so this might be the Starlink HQ instead where they coordinate space communication technology in Ukraine.

Ukrainians then woke up this morning to a massive statue of Musk riding a doge while holding a victory cup.

Curious bystanders were spotted wondering what NFE might mean. We think it stands for Not in Fucking Europe.

That was a sign that today would be extraordinary, this time in a good way, as Kyiv’s city center was transformed into a show zone.

Musk appeared with his doge, as shown in the featured image. He enthusiastically greeted the audience, and even allowed some of them to pet the very happy dogy who was getting most of the attention.

The two then took to the stage and gave a most spectacular show that entertained the crowd for an entire hour.

The crowd joined with huge cheers, some crying tears of joy, while young men and women jumped to the beat in an unforgettable moment.

Once the concert was over, Musk took part in a ceremony of sorts at Kyiv’s central cathedral, the iconic dome that we’ve all now come to know.

In a speech to those attending, he said he had gathered the defenders of Europe, across all the seven seas, to uphold the will of liberty under the sacrosanct flag of liberalism in our times.

Much has gone right, he said, in our heroic defense of Kyiv. Too much in fact to think it just of men. God is with us, he shouted. Oree Oree, answered the crowd.

Putin can claim he is some third Rome, Musk said. But we have clearly seen, by the carnage the Russian troops have experienced, by the devastation in their highest ranks, that god is not with Putin.

Where is Putin’s god? Not in this earth, and not in heaven, Musk claimed. So we must now not only defend, but we must advance, to make it known forever more that Europe stands free and Europe shall always stand under liberty.

From the Japanese islands to Georgia, the oppressed Caucus and our Crimea, may the rule of man under the rightful god prevail over the fantasies of fallen angels, Musk said.

For god has shown himself in the theatre of the past 35 days here in Ukraine, and god is not with Putin, Musk said. God is with us!!

So let your spirits rise to the mights of heaven, a spirit of man that still remains very much a mystery, and may it continue to show its extraordinary nature, even more now that Kyiv is liberated and all of Ukraine stands on the verge of being free.

To liberty, to European democracy, Glory to Ukraine and Glory to the Heroes, Musk ended.

He then disguised himself as some street rabble, and within hours somehow he found himself in his high-tech HQ in the United States.