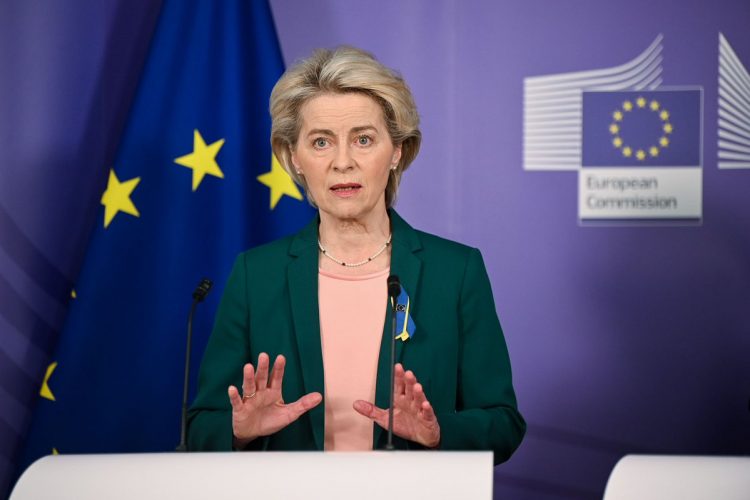 Europe and Russia stand on the brink of a generational rapture as EU ambassadors meet tomorrow with new sanctions to be announced.

“We are also working on additional sanctions, including on oil imports, and reflecting on some of the ideas of the Member States, like taxes or specific payment channels such as an escrow account.”

“To take a clear stand is crucial for the whole world,” she said. A clear stand “against the massacre of civilians” in this Europe.

Pictures of the liberated areas near Kyiv have shocked the world this weekend, moving the debate in Europe to actual sanctions.

The coal ban is worth $4 billion a year, Leyen said. Sanctions on €10 billion in other areas, including advanced semiconductors, machinery and transport equipment, will also begin. Another €5.5 billion is also imposed on “specific new import bans.” Russian ships will also be banned from EU ports.

But the big one is of course oil, and then gas. The two have been decoupled. Oil is on the table, gas is not.

Increasing pressure further, Lithuania has announced they will no longer import Russian gas. 26% of it came from Russia prior to this week. If we can do it, why can’t you, their ambassador will presumably say with Foreign Ministers to then meet on Friday.

France is calling for a ban on Russian oil. Italy is saying they’ll do what others agree. Austria is against, as is Hungary, but the decision is Germany’s realistically, which appears to be undecided.

It’s a big decision, not just in immediate effects. Something like Swift was big, beyond the effects in itself, because then only real sanctions like oil and gas were on the table. The two have been decoupled so taking out oil still leaves gas, but after that, only muscle is left if one wanted to act.

In addition something like Swift, if the war ends preferably immediately but also in the next weeks or even within a year before opinions harden and solidify, can eventually be returned.

Something like oil however, once is cut off, will probably never be turned on again. That’s within the disclaimer of never say never, but there would be so much pressure that it is difficult to reasonably see it being turned on again.

That makes it a generational decision in relations and therefore is a very serious decision.

Where it concerns more practical aspects, there would be about five months to arrange transitional matters while working on more permanent solutions.

Italy here would probably be crucial. They now have competent leadership which can secure resources, especially if they continue that friendship they began in Libya.

A new pipeline has opened recently from the outer edges of Europe straight to Italy. That can be extended to new friends that are making their way on the map and have been caught in all this due to no fault of their own.

The pipeline method through there would be more medium term with some diplomatic maneuvers, with the current potential solution being ships to Azerbaijan, then the running pipeline to max and potentially rail through Turkey, Greece, and then maybe even tiny Albania where a new Porto Romano is looking to be built at a cost of less than €1 billion for the whole Adriatic.

From there to Italy is just a stone throw, or up through the Adriatic to north Italy or Croatia where they’re a stone throw to Berlin, Poland, and by rail even to London.

North Africa also has plenty of resources. These too can ship either to Italy and then rail, or all the way to Croatia in one side with France and Spain close too from this direction.

There’s Qatar. They’ll do anything, we suspect. And then some easing on Venezuela is without difficulty. Also on Iran, though slightly more tricky but not with some creativity.

The matter can therefore probably be managed if some European task group is given the order to do so. It might cost more, and of course the ambassadors and the foreign ministers have better information than we do, but any argument regarding recession or economic hardship would need more detail to be persuasive if the argument is that they just don’t have the option to practically bar Russian energy resources in as far as there simply wouldn’t be supply.

It’s spring so, with will, it probably can be done in a way that still keeps things running. That’s however just one element in the wider picture, the bigger one is whether it has reached the point where Russia is no longer European.

A ban on oil therefore should be a significant event in the learned Russian civil service as they’ll have to face a very overt decision where themselves are concerned in regards to the de-Europeanization of their country.

Realistically, such ban probably won’t make any difference to their decisions in the short term, but it should at the very least make them think about where do they expect things to go and what role exactly do they see themselves playing realistically speaking considering their tiny economy.

Because these are decisions that may affect their country long after Putin, who clearly is so selfish that he started a whole war to get another endless term as President while his people were starting to hate him.

And it may have such long effects because you don’t just change suppliers every weekend. Once it’s off, especially with the focus on renewable energy and energy innovation, it may never turn on again.

As such, with the decision being what it is, it is probable the people of Europe would be willing to accept an oil ban as there’s a hot war going on, just as they would probably understand otherwise as the stakes are the highest, while probably coming back to it until it is banned or of course until the war ends if that is shortly.

Stocks, oil, gold and bitcoin are all down a bit today, while gas is jumping 7% over $6 with it unclear why. Perhaps speculation that a coal ban might mean more gas use, or just speculation in general.

Analysts expect a price rise if Russian oil is barred, but it’s not clear whether that will be the case on the ground as there might be a reshuffling where say China buys more from Russia, freeing more Arabian oil for Europe.

Speculation drives prices temporarily however, but oil is already probably too high for market demand, and gas is probably beyond that. So prices should adjust eventually.

A rise in commodities tends to negatively correlate with stocks and bitcoin is now sometime following or leading stocks, so the jump in gas has Nasdaq at -1.44%.

Although stocks were having a good time so, it’s maybe more just the market being the market.

And they’ll speculate of course, but neither oil nor gas is a fixed resource. So any market effects from any ban announcement may well just be temporary.

Not for Russia though as they’ll lose billions, billions which Europe can put to better use as there’s nothing worse for the economy or the environment than war, and there’s nothing better than no longer funding such war.