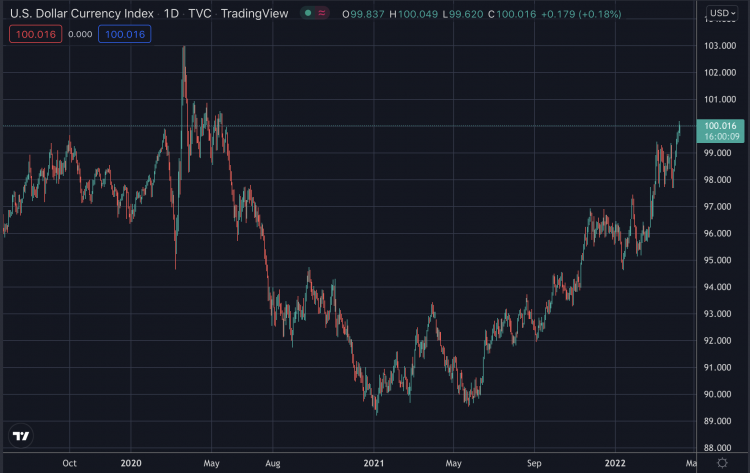 The dollar strength index (DXY) has reached a two years high, just about crossing 100 today to return to the upper bound created in 2015.

Since then, the dollar has not stayed much at these levels with the highest reached being 103 in December 2016 following a structural fall from 120 in September 2001.

The all time high remains 163 in January 1985, but those levels have never been seen again, with the current 100 being in the upper bounds, though it remains to be seen whether it will dip again or unusually head higher.

Making it a bit peculiar, and an indication that China has shifted its dollar peg to target a stronger yuan.

The euro zone has not quite moved towards tightening yet, though ECB has indicated they may reduce their balance sheet quicker than thought, hence the dollar gaining on the euro.

The English central bank has increased interest rates even faster than Fed however, yet GBP has still declined against the dollar.

But the pound is still somehow falling against the dollar while CNY isn’t falling very much even while the British economy grows at China’s rate while the Chinese economy seemingly moves towards growing at the previous British rate.

One potential explanation may be that yuan’s usage in international trade is rising, though it’s still a minuscule 3.2%. Higher than pretty much zero however a decade ago.

However the pound is kind of up to 6.3% and the JPY is up as well to 2.8%. Making this also not quite an explanation as to why the dollar is rising against GBP, but not against CNY.

In international trade moreover it looks like the biggest category rising is “other.” But it may well be that the data looks backward, while the market looks forward.

As interest rates are expected to keep rising, traders are probably trying to price that in, which leads to the conclusion that some of this DXY is more due to speculation.

In addition, the rise in oil prices could be another explanation, especially in regards to this discrepancy between GBP and CNY.

Oil is now falling, so DXY might slow down, and maybe even considerably. You’d expect it to sideway here a bit, maybe even for months, unless it chickens out and moves away from the 100 line quickly.

It may keep gaining on the euro however as ECB is not yet quite moving towards tightening, though they’ve indicated they will, but such gain would probably only be temporary as ECB then moves.

The joker card here being CNY for this to move above 100, but there’s no indication the Chinese central bank plans to move on that strengthened peg.

Which means bitcoin and other assets might have some room to rise as some of their fall may well have been due to the strengthening dollar.

That’s more for shares than bitcoin as for the global asset, a strengthening dollar means a weakening euro, so Europeans buy more while Americans buy less, cancelling each other out.

That’s seen more clearly in stocks where European ones have been seeing more green than in USA. But, an unusual correlation between bitcoin and Nasdaq may have led it to being affected more by the dollar.

Thus a decline or even a halt in dollar strengthening may lead to bitcoin continuing its recent gains.