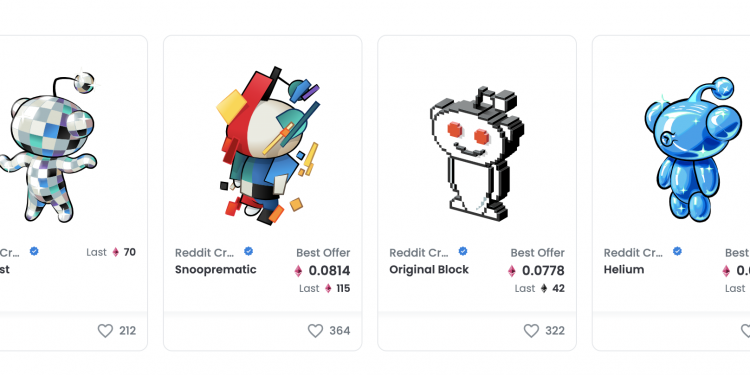 Reddit, one of the biggest social network in the world, has incorporated ethereum based NFTs within its platform.

Four NFTs (pictured above) were sold for as much as $400,000 each to use as an avatar within the Reddit platform.

You can’t use your own NFT as an avatar. If you don’t have one of the four, you’ll have to just use a given jpeg.

The extremely limited NFTs available suggests this is probably just an initial test to see how integrating NFTs might work on Reddit.

This can easily be expanded by allowing people to mint their own avatar NFTs, either as a sale or just as a function.

Or you can use any NFT you have after connecting with Metamask as required by the platform.

Their function is then to just display them on your profile page which they might be trying to make more prominent in the new Reddit design.

It could also be just a way to get people to switch from the old Reddit design, which still remains very popular, to the new one.

Twitter has also tried to integrate NFTs as a profile picture, with it not too clear how that went as we haven’t come across many of them in the wild here at Trustnodes.

There are privacy concerns, especially if the user’s ethereum address is shown as Twitter does, because then you can potentially see someone’s wealth and their financial activity.

At scale, this can all be graphed to de-pseudonymize blockchain addresses, requiring significant care in execution to not basically open source your bank account.

A problem that OpenSea doesn’t have because the blockchain address is the username and the account.

Reddit and Twitter can also allow for blockchain accounts, with the user then giving it a nickname if they want, unless they’re comfortable with attaching their ethereum address to their real name.

Thus both Reddit and Twitter are probably taking it slow in integrating NFTs, but this new invention has now become sufficiently widespread for both to try them out.

Bank of England Torpedoes the Economy