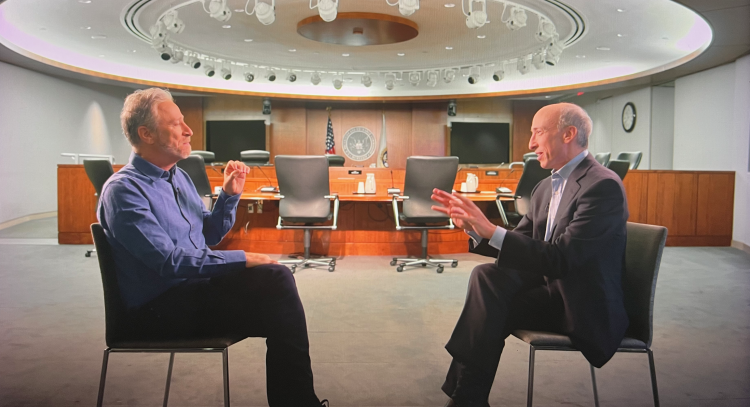 Market democratization has increased stock ownership by the wealthiest 10% to 84% of all stocks, rather than Robinhood and back in the naughties things like e-Toro increasing distribution.

That was the conclusion of John Stewart in his new show on Apple TV where he tried to figure out why greater access to stocks has seemingly translated to the rich having a greater share.

Market complexity was cited as one cause, leading to less information for investors regarding for example just how much of a stock is being shorted.

Inducement and incentives was another catchall phrase where a misalignment leads to a stacked board.

But it may well be the Securities and Exchanges Commission (SEC) that in the end was shown to be the actual culprit as Mr Stewart hit a very brick wall in his interview of SEC chair Gary Gensler.

The latter came across as some sort of a Communist Party official holding the party line while knowing fully that it has little to do with reality.

Congress makes the law, we enforce it, Gensler repeated three times. Congress is bought, Stewart insisted, while seemingly trying to find out what SEC can do in that realpolitik situation.

But, Gensler didn’t give an inch. “I believe in the system,” he said just minutes after someone expressed his rage at the buy button disappearing in Robinhood at the beginning of last year.

Our responsibility is to ensure markets are fair, Gensler said, yet there hasn’t quite been an independent report on the fairness or otherwise of cancelling the buy button.

That is increasing the perception that the stock market in particular is actually not fair at all. Fundamentally its design is one of intransparency as you have to trust what the necessary intermedieries in the paper system claim to be the facts.

Necessary because the paper has to be held somewhere, like in a book library, and someone is a custodian of that paper. You can audit it, but there’s plenty of room to cook the books.

The room in question being clearing houses where they have plenty of paper that details the buys and sells of brokers, hedge funds and banks.

Alas, these clearing houses are a collection of such banks, and are owned by these very banks, with the conflict of interest apparent.

So when they said in 2021 that the GME short squeeze was putting such clearing houses at risk, was it really true?

The sum that stood to be at risk was about $1 billion, maybe $2 billion, maybe even $10 billion. A house that handles trillion was really to come down due to a penny billion?

An audit could give the answer but you’ll probably have better luck auditing the Fed than these juggernauts through which runs all economic activity, all.

Including your Robinhood stock, with the app taking the blame even though in the grand scheme it is a very small fish that found itself at the front lines of a battle of sorts between the public and the banking system, and thus probably was just ordered.

With the banking system so winning in the end as they cleverly blamed the platform and those utilizing the platform for the very dark pools of financial clearing.

Knowing all that, one does wonder whether Stewart really thought the paid and bought for ended with Congress, though he did laugh at some point in a way that suggested he was so stupid for not realizing the person in front of him was also paid and bought for.

And that he had come not to the sheriff, but to the bodyguard of the banking system. Very much to the right place though for learning what is the problem.

SEC of course, and the Securities Act 1933, is the precise reason why market access is an illusion because the public is limited to accessing only the giant corporations market.

Mid sized companies, startups, anything that is growing properly is limited to the rich. By the time it goes public, the rich already own most of it. When the public then is able to buy, they’re giving money to those very rich, as well as the founder and employees who may have gotten stock options.

Making the increase in market access superficial, with SEC being there to enforce precisely that sort of system where the public, like retail investors, are kept out of actual worthy investments.

They’ve tried their best since 2018 to close off this space to the public too, and were it operating on the paper system where these clearing houses banking collectives can turn off the buy button at a whim with no consequences, cryptos would have been closed to the public long ago.

But this is operating on the code system, where dark pools are still very visible, where transactions are peer to peer without any third party, especially in defi where smart contracts make the law and enforce it too.

Where one needs not rely on Gensler and meet the wall of someone seemingly genuinely saying that what we all know is not the truth, is actually the truth. Congress makes the law, but “of course John banks lobby.”

With that sort of denial of even the widely accepted premise, the problem is clearly that there isn’t a problem to those in charge of enforcing fair markets because taking off the buy button to them is very fair due to all these pesky public investors.

The problem to them is competition, things like crypto which allows for the unwashed to buy projects when they have a lot of room to grow and so might actually make a lot of money.

Because then it wouldn’t be the banks that own 84% of stocks, but the wider public. And worse, they might not even be able to turn off the buy button because the smart contract code is written in stone.

The current system where the world’s richest man, Elon Musk, accuses SEC of being the Shortseller’s Enrichment Commission is fine instead, because that’s just the rich, like Gensler whose networth includes $50 million to $100 million in investments, playing the public.

That Musk wants to take Twitter private presumably because he thinks the public market is a bit rigged, is fine to them too as the rich can still invest in the private market, the public can’t.

Making it a very fine system indeed, and one everyone would believe in, if they were very rich. Since most are not, the brick wall at least reveals what is the problem, and so makes it a task for this generation to break up the SEC.

Because the public market needs a regulator of its own, the private market its own regulator, and stocks, bonds, cryptos each need their own regulator.

For one man can’t deal with startups as well as giant international corporations worth more than some countries in Western Europe.

Nor can century old laws be fit for the digital age. Discriminatory investment prohibitions have to go, then there can be a substantial democratization of markets, as well as much needed competition.

Those that benefit from the stacked system however are not the ones to ask to change it with the SEC chair being a former Goldman Sachs banker by tradition, Gensler included.

The way to change it is by just building the alternative, a system where no one can cancel the buy button and where there is no brick wall because you don’t need to go through that door at all.

A code system, where SEC and even Congress is the law of code, with the un-manipulatable global network of computers being the custodian, and the intermediary, in a new asset system that levels the playing field for investments, just as the internet did for publishing.

Then, Gensler can continue to pretend he believes in whatever he wants. The rest can decide for themselves by exercising their choice through market competition in proper capitalism for the rich and for the wider public.