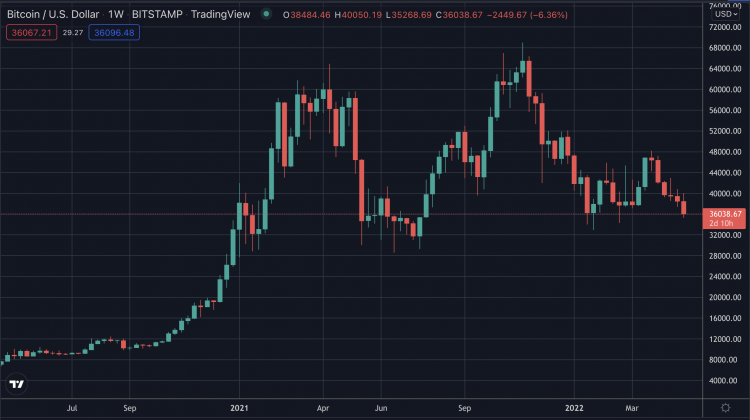 Bitcoin is seeing one of its longest streak of red, with the crypto currency entering its sixth week of falling down.

Green has not been seen since the 21st of March when $47,000 was reached, with a new low made every week since then.

This week has been one of the most brutal, less due to the size of the fall and more because it fell from low levels to now below $36,000.

Nasdaq hasn’t fared much better, down from 16,000 to now close to falling below 12,000 with its price also falling lower and lower for weeks.

Making this a bit different than previously when up or down, bitcoin was on its own as now it looks like bitcoin is part of the bigger story.

And so any judgment as to whether this is some internal bitcoin cycle is constrained by the fact that in some ways it feels like bitcoin’s price has almost nothing to do with bitcoin.

Yet 2018 wasn’t too different in as far as both bitcoin and stocks fell, but bitcoin fell at the time far more than stocks which lost just 5%.

Allowing for some speculation as to whether stocks have maybe stabilized bitcoin while bitcoin has made stocks a bit more volatile. But if there is a cycle, what would it look like?

The current bitcoin price looks different because we have two tops and so it looks more like sideways, but it also looks somewhat similar since November, although with less bounces.

We have this floor however. It was at about $6,000 in 2018, and then we have a brutal capitulation when bitcoin dead.

In 2014 it was worse, although bigger bounces, but again we have that floor in spring, a brutal capitulation to rek the Spartans, and then a return to that floor.

The last one now is… well, we’ll have to get the MT Gox chart. And this is completely different, but on the surface.

We have a May 2011 blow off top here. Since then, there has always been a May run during bull years, but it never ended in May.

In 2011, bitcoin actually ‘died’ this year however. It was proclaimed as unworkable because gox had been hacked and so all lost faith.

But where price is concerned, we have sort of the same story, although here we get to see what a dive with no bounce actually means to dispel any of our spoiled preconceptions.

Still we’ve managed to find a floor here and the brief dip below it to then return again and continue the journey.

So, if we are in the cycle, then we are at the floor too. Over the years that floor has become smoother and smoother, with it to be seen whether that capitulation is removed through it being priced in this time, or whether we get a U later this year again.

It can of course also play differently. It doesn’t have to repeat, though maybe it will echo, with little here to be said for sure – where probabilities are concerned – except perhaps two things.

If you are going to hodl, then you have to hodl with the expectation of not getting even for at least one year, more likely two, and if you hold until then, hopefully you can then just keep hodling.

That’s for those that have it as investment, they don’t ‘need’ the money. For those that need the money, it’s their business really as they have little choice anyway if they actually need it.

But if it is spare savings, the calculation is not whether it will get worse as it may, but whether you’ll have the guts to get in if it does, because at some point you’ll start feeling this will never rise again, and so you might not buy.

That can be fine obviously. You’ll just buy at a higher price or you won’t buy at all, or right now you feel you’re a bot head and so you will catch the proper capitulation. At least you won’t lose money. That might be the feeling now. It won’t be when and if you look back to think just how much you could have made.

That’s from the perspective of the already invested. Those not in have to consider now or when. The same applies.

You can wait and risk forgetting about it, or not having guts to go in when and if it looks like carnage. Or consider we’re probably at the floor and it makes little difference if you hold the perspective of two years.

Because each time, looking back, it seems like around this period is the best time to buy. It has fallen to sort of mining cost, it moves up and down but seems to be anchored there, there’s still downside potential but it’s a meh in the face of upside.

And that’s because you probably won’t buy when there’s that capitulation in autumn 2018. Too little hopium, too much aaa, if you’re paying attention to price at all which by that point you probably aren’t.

Because it is probably around now when some of the class of 2020 leaves. The smarter of them maybe do so with a buy in a set and forget.

For the rest, we can finally actually start using all this defi stuff, build those legos, and maybe play the game of who can hold a margin long to the next moon next year.

If there is one, you never know such thing, but from this perspective there isn’t quite a cycle as such. More a new floor with potential gains in a year or two, rather than in a few weeks or a month.

And if that floor theory holds, then there is no bear really. Just no huge bull run, for some time, and even that is a maybe as there may well be a bull run, though 10x-ing $70,000 probably isn’t on the cards soon.

Instead we might sideway, maybe for a whole year, if the cycle is happening, which from a longer perspective is perhaps just background noise as adoption continues to grow, companies continue to be formed and to be funded, and the number of bitcoin investors continues to increase.

All actual fundamentals, which are a lot more relevant to the price and its movements when looking forward to the new floor.