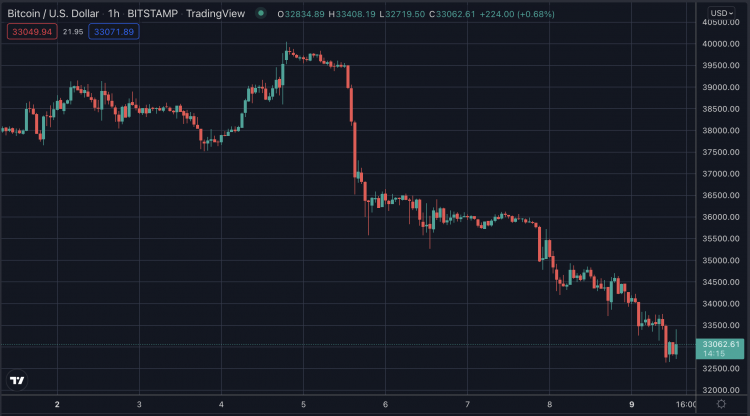 Bitcoin has fallen by about 20% since Thursday, capitulating below $33,000 for the first time in 12 months.

The currency tumbled on interest hikes  by the Bank of England and he Federal Reserve Banks on Thursday, and kept tumbling since.

As it now enters its seventh week of red for the first time ever, signs of capitulation are everywhere.

From the falling chart shown on livestreams, to kids declaring they sold: both their NFTs and their bitcoin.

As Nasdaq opens today with another -2%, bitcoin started sort of rising a bit, indicating that it might no longer follow Nasdaq down.

That’s on a day when everything is red. Gas is down 6%, oil has fallen by close to 3%, gold is down 1%, Palantir has crashed 20% on missed earnings, things like Lilium have nearly halved since Thursday, down another  7% today.

It’s a crash, a global market wide crash. Trillions are being lost and nobody is doing anything about it, neither Biden, nor Powell, nor the Queen of England.

Everybody is just watching one of the biggest sell off in decades with concerns now rising whether it might spark a panic as central bankers run amok and unleash chaos in the market with the elected not saying one word even as the economy gets torpedoed and by men, not  by markets.

By the choice of two people, Jerome Powell and Andrew Bailey, both of whom have lost their head in going far too fast and far too quickly, the pensions and savings of millions be damned.

Strengthening that to the moon may well turn inflation into deflation, but it will also turn the economy into  rubble.

Considering the US Treasury Secretary Janet Yellen is in the banks’ pocket, that Biden has no clue about markets and Boris has even less, it may well be the only one that can do something is the British Chancellor Rishi Sunak.

The billionaire probably understands very well what is going on. He needs to shout to Bailey and to the Bank of England and tell them no more unfettered reking of the economy.

For there is no such thing as independence from the public. The Bank of England and every other institution is under democratic control, subject to the will of the people, and if the current elected do not behave so, then the electorate must return in charge someone that keeps in check these bankers who are running amok.