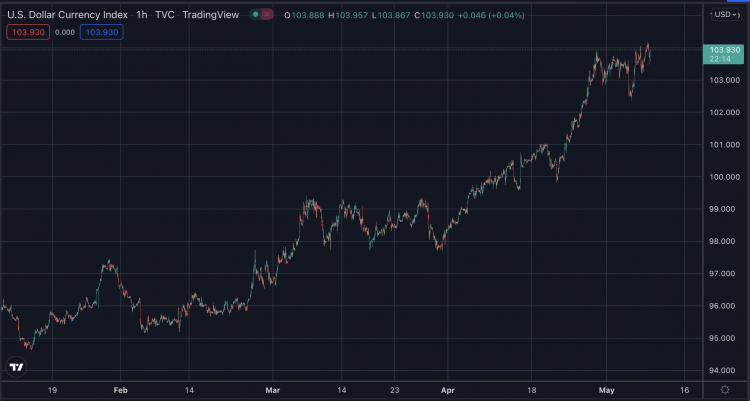 The dollar has never been stronger since the booming heydays of the naughties when the economy was growing at 5%, year after year.

Everything else is crashing: bitcoin, stocks, gas, oil, gold, and bonds. Not one asset sees green in this red Monday, except for the unit of measurement itself, which is meant to be neutral.

Yet currently, it seems to be very far from neutral. It’s a dollar bull run the likes of which we have never seen at these levels for a generation.

You don’t buy bitcoin or stocks anymore to make money, you just buy the dollar and wait as central banks orchestrate another mini-boom and not quite a mini crash.

Trillions are being wiped out, with mass unemployment to follow as the Bank of England moves to raise the unemployment rate by more than 2%, all in just a year.

The question now being just how much higher can DXY go considering central bankers are not letting the economy boom anymore as they want to reserve good growth for the non-developed world.

A question that depends on whether Powell will really go ahead with two more hikes of 0.5% each in the next two meetings.

If he does, Democrats will probably be kicked out and they might not be entrusted with the economy again perhaps for a generation just as Labour keeps languishing in the wilderness following the 2008 crash.

In UK it’s the opposite, with conservatives in charge and under their watch they let the unelected Andrew Bailey turn fiat money into an investment, making the pound a very biased instrument which leans towards sinking the economy.

Their purported justification is inflation, yet this generation has never seen more misleading inflation data where we’re comparing current prices to those of a Great Depression economy in 2020.

If in May 2023 we are still seeing 8% inflation, then maybe these central bankers could panic a little bit. 8% inflation now when the economy grew 20% some quarters last year while inflation was tracking the depression year, is not real inflation or at least it’s of the desirable sort as wages were rising and the economy was growing far more.

And it is probably precisely because these inflation data are misleading that they move with speed to hike now because soon enough the current inflation rate will be over last year when inflation was 5%.

Meaning we’ll most likely see inflation go down, and their justification evaporate. A fake justification, with the real reason for these rate hikes being to milk the debtors after they gave them unaffordable levels of loans at zero interest.

Under these circumstances, even raising rates at all any further for at least some quarters is probably too politically dangerous as either Powell or Biden would be fired.

That’s cheating however, with the seemingly laser focus of the central bank on inflation needing some input from the elected to engage in a wider view of the consequences and benefits as it’s not clear this generation is willing to allow the central bank to orchestrate a crash in our time without some heavy cost being paid by those in charge.

The rate hikes must be paused. We need to see first the effects of the hikes so far, and the public as well as the economy has to be given some time to adjust, because inflation is far less of a concern than growth, and intentionally killing growth may well lose the Fed its mandate for it will show itself as the cause of the lost last two decades.

A return to sclerotic growth is a folly. Moreover looking at matters more widely, we should be thankful that there is finally some inflation after decades of trying to bring it back to the point negative interest rates were imposed.

Now that it’s here, let’s see what it does first when it is properly measured over a year that actually has inflation, like the second half of 2021, rather than over a Great Depression year.

Then they can hike again if inflation keeps being high, which it probably won’t because there’s no good reason to expect significant inflation any longer, unlike for 2021 and this year when you couldn’t expect anything else.

A roaring economy after it was chained down in 2020. Once let free again, it returned to normal and thankfully a bit more than so, setting hopes we may get a new trend of proper growth.

Then these bureaucrats step in with a faux panic, barking about more beating like they’re some sort of overlords, rather than properly doing their job of moving in softly and preferably unnoticeably to raise when the economy can bear it, not with some sort of artificial formula of bang bang bang.