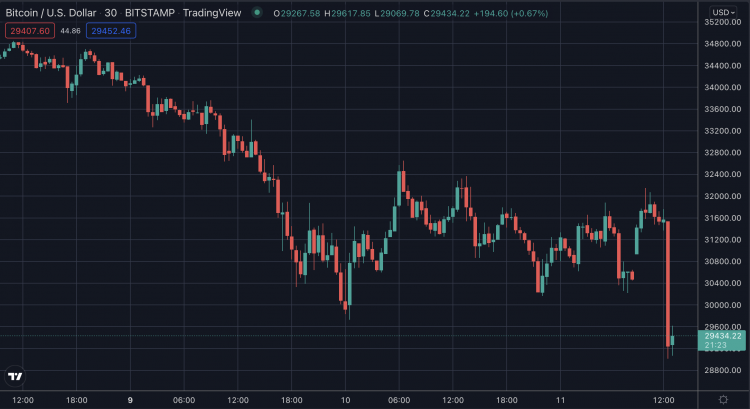 After somewhat recovering to $32,000, bitcoin has dived again to just above $29,000 with the currency losing another 10% today.

That’s while European stocks are somewhat up by generally 0.5%, while US stock futures suggest down 0.5%.

The dollar strength index however jumped to make a new high above 104, but that didn’t last with it currently at 103.7.

All suggesting this latest bitcoin dive might be more due to internal crypto factors than macro.

In particular, investors are perhaps speculating that the Luna collapse may affect sentiment with Janet Yellen, the Treasury Secretary, not missing the opportunity to already point out the UST crash as justification for imposing regulations on stablecoins.

Such regulations would come with benefits however as dollar tokens would then have to be backed by the Fed, making that on-going debate not relevant to cryptos as any such regulation would be neutral at worst where something like bitcoin is concerned.

The Luna collapse did affect bitcoin however as some 70,000 BTC was sold to keep the peg, which failed anyway.

But that’s already over with Luna now left just with adjusting the burning and minting parameters, making this dip perhaps more the laggards finding out.