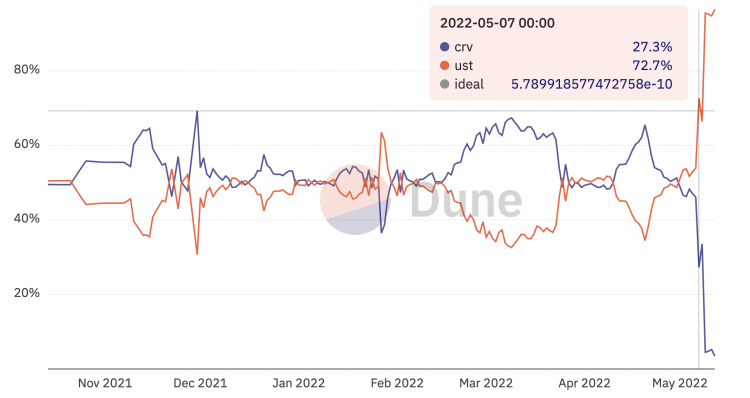 “Today’s events seem like a coordinated attack that could have been organized using insider information that got leaked.”

So said Mudit Gupta, the Chief Information Security Officer at Polygon, on the day the UST Curve pool came off balance.

On May 7th, $150 million of UST liquidity was removed from the Curve pool by Terra Labs at 9:44PM. “We removed 150M UST from Curve to get ready to deploy into 4pool next week,” Do Kwon, Terra’s founder, said.

One minute later, an address newly created through funding from Binance, bridged $85 million UST to ethereum, selling them all just three minutes later.

On the terra end, this address is thought to have sold some $120 million UST on Binance as well.

Terra then removed another $100 million of liquidity one hour later on May the 7th at 10:52PM. A stable UST thus starts coming off the peg.

But we can see in the featured image above the first leg of the imbalance, which we have highlighted, after the $150 million was withdrawn.

The second leg then follows when it goes completely off, and that’s after the $100 million was withdrawn.

To finish it off, we get another newly funded address, again from Binance, selling eth in chunks of 1,000 for a UST that was now de-peging on May the 8th, with around $100 million bought, profiting from the de-peg.

The day after we get 19,000 bitcoin, worth half a billion, transferred from Gemini to again Binance, with it not too clear whether this had much to do with the  on-going de-peg at that point.

One final fact here is that the $85 million UST sold on Curve for USDc on May the 7th at 9:57 PM started bridging to ethereum prior to Terra withdrawing the $150 million UST.

It may well be thus that this Binance user had some prior information of this withdrawal, with everything going on here so revolving around Binance.

And so, it can’t be tracked any further but by Binance, with those developments on the 7th and 8th so forming the ground for a run on UST and the collapse of Luna after UST could not be stabilized.

The withdrawal of $250 million UST liquidity thus seems to have been the cause of the de-peg, sparking further actions or reactions that eventually became uncontainable.