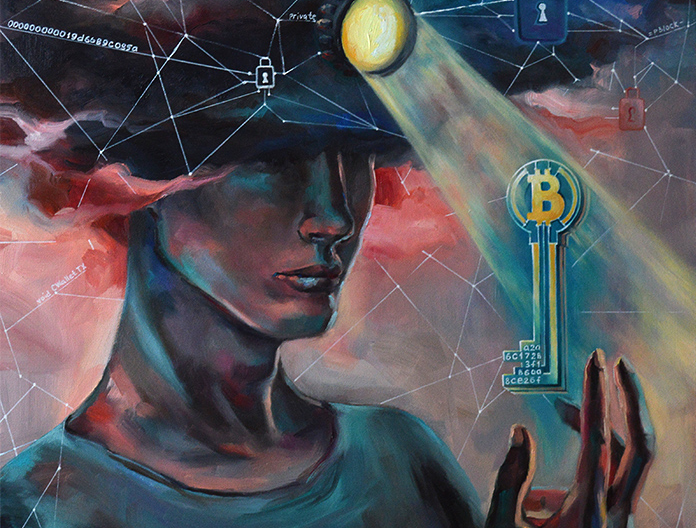 MT Gox boomed bitcoin as the only exchange for buying and selling. Then it temporarily doomed it. ICOs boomed crypto as the dawn of new capital formation, and then doomed it through eth concentration. This time…

Defi boomed eth, and then NFTs, and then boomed other blockchains, old-ish like Binance or new like Solana. But there is no eth concentration.

Unlike Initial Coin Offerings (ICOs) where eth was handed out in return for a token that was to operate a new project or blockchain, decentralized finance that propelled this recent boom just airdropped their tokens.

Uniswap and dYdX were two of the biggest airdropped tokens that created value literally from nothing through a new unit of measurement, uni or dydx or many others, that in theory can entitle you to some of the project’s income in crypto-dividents of sorts.

This token was not created in return for anything. Curve’s CRV when it launched said it had zero value.

Value is of course for the market to decide, but though Curve’s founder Andre Cronje probably made plenty of eth, none of it was made by the public directly handing eth to him for newly minted CRV.

That’s a significant difference, because Uniswap’s market cap is currently $4 billion. That’s two million eth. You multiply it by at least 100 for the many other projects, and you can understand what happened in 2018.

Some 2.6 million eth was sold in 2018 by ICOs, and that’s what we could track. It was a relentless new practical or circulating supply, non stop every month, that seemed to almost not care about price at all as they kept selling at even $300 eth.

That concentration had to be cleared and its distribution restored. And that’s what happened, with it down to just 30,000 eth a month in late February 2019 from highs of 400,000 eth a month or more. Paving the way then for a new supply and demand balance.

ICOs in the process gained a bad reputation, although plenty of decent projects came out of it, including Binance itself, Crypto.com and others.

Yet this speculative concentration of eth – including on projects that wanted its end, though ended up ending themselves like EOS – was not to repeat.

And so what makes the bear if we are to have one this time? Mere woocoos poocos superstitious nonsense in cycles, like it’s written somewhere? Macro? Just black marketing through social media bots to make everyone feel miserable? Or is there actually something concrete?

Demand for bitcoin at least so far has been in only one direction. The new invention is going through global adoption, and that’s increasing.

At some point it won’t be up and up where adoption is concerned. We’re probably at least a decade from even considering to start speculating on whether that point has been reached.

Until then, the story is not so much demand as supply, and in particular practical supply because some 80% is just held in cold wallets and does not even move.

In eth these miners will go soon enough. In bitcoin they’re a far smaller proportion of supply than in 2018.

That’s a huge shrinkage. In 2014 their proportion was some 25% of the market cap. Add to that merchants who had just began accepting bitcoin at some scale, and the persistent disbalance gives you the then bear that was eventually cleared.

It was cleared by bitcoiners effectively kicking out merchants, and then you had the halving. In combination you get a supply shock, especially when adoption kept increasing throughout this period.

Now, in 2022, there is no new supply on the market. You have traders of course, but traders are always there, bull or bear. You have investors and their shaking out and shaking in and pigs and all that, but you always had these.

They are not a new factor. NFTs gathering some eth to dislodge is a new factor somewhat comparable to ICOs, but the combined market cap of all NFTs is $11 billion. Tiny compared to the overall crypto market cap.

So who exactly is the bear, if there is one?

Jerome Powell, the chair of the Federal Reserve Banks, is apparently the most powerful man in the world. He says something, and markets move up or down. A bit like Musk tweets, or if Vitalik Buterin said something stupid.

Because Powell is not quite in charge, except for in charge of speculators. Currently, a certain dynamic in the market is in charge, and that dynamic seems to be forcing itself through preconceptions.

In particular, the current level of gas prices, up another 2% today to $8.50, suggests the economy is booming.

These price levels could not be sustained otherwise, with there being supply aspects to it but demand is clearly higher than we’re used to.

Stocks however are not quite reflecting a booming economy. That may be because as much as commentators like to say they look six months ahead, currently they might be looking five months back to the first quarter as that’s the latest data to them.

The story there isn’t great because there were lockdown fears in the first quarter, and some places did even shut down.

But if we look at current data, we appear to be in a new economy of high growth in the west, with a corresponding slowdown in China.

In this economy stocks should boom, and though there is a monetary tightening in base block production, we may see a monetary expansion in commercial lending.

The government in addition is getting rich, even very rich with a half a trillion bonanza. A lot of it will be invested in infrastructure, solar, chips, space, digitization, electrification of transportation, and other ‘raw’ industries.

This will pave the way for a peace dividend. The 90s, though a bit different but we are no longer waging war and that has an effect on the society as a whole for a state of peace where our own soldiers are concerned, is very different from a state of war.

Which means mainstreet may have seen the bottom. They have gone through a miserable two decades, they are now getting what is hopefully only the beginning of a boom, and they’re in denial with a media fixation on ‘the cost of living’ while unemployment reaches its lowest level in a century.

For stocks, they’ll get over their hiccup as investors get a grip over their delusions and hysteria but for crypto, if we are entering this new trajectory, then we might be entering a new crypto era too.

Gold does very badly in boom times. Why? Because it doesn’t produce anything. Other things do, the velocity of money is up, people are spending, there’s plenty of investments with actual returns.

Bitcoin does produce something: a global payment network. It’s not raw industry, or retail shopping, it is software, but it does meet an actual need or desire to send value from point to point.

If trade goes up – as it will if the west booms – at least within the west and friends, then demand for the tools of trade, like paying for things, will go up.

Unlike gold, bitcoin does thus have returns, just of a different sort than we’re used to because the returns here are direct in as far as you need to buy bitcoin if you are to transfer it, rather than indirect where some of the profits from product sales are manually sent to stock holders in dividends or are used to buy the stock.

Bitcoin still performs this function very well. You might not buy coffee with it, but you’ll buy a ship container or a barrel of oil with some crypto.

And this aspect is what complicated considerably any analysis between cryptos. Is their primary value due to transfers? If it is, then bitcoin does it fine.

Something like ethereum however does that as well as provide the more traditional growth ‘companies,’ mainly in finance so far.

So it is easy to say eth should do well in such a new environment if we are to enter it, but it isn’t so easy to say that it will do better than bitcoin because that seems to have the majority of the transfers market with no good reason for that to change since eth did not scale either, at least so far.

But eth does provide what the market would crave in such a new environment, new products, and that’s before even addressing the whole web3 nascent space.

This ability to act as both a store of value and a means of exchange, to be useful both in good times and bad, is what tends to make cryptos uncorrelated over sufficient time frames.

That can change due to many crypto stock products, but temporarily because cryptos’ own factors will sooner or later impose themselves.

Over what time, is for speculators, but where fundamentals are concerned, bitcoin and proper cryptos have plenty of room to grow in adoption both as a means of exchange and in services though defi or web3.

With a lack of new market supply pressures in addition, the transition this time might be smoother, and so if there is a bear it might not quite feel like it.