The Merge may change that. 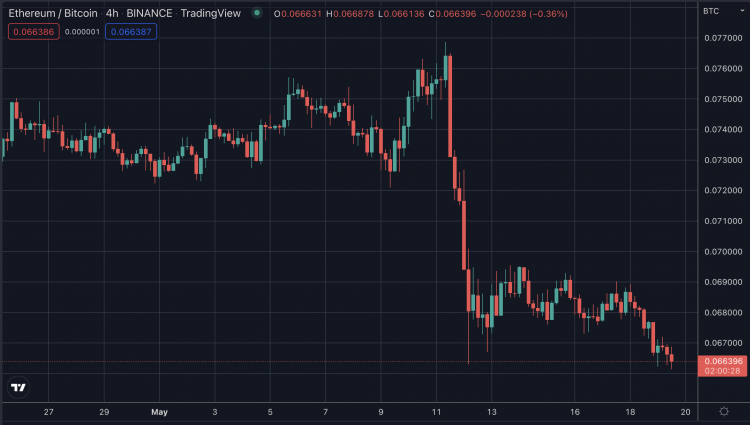 Ethereum's ratio against bitcoin, May 2022

Ethereum’s value against bitcoin has dropped 15% within the past week amid a continued market rout that sees it below $2,000 for the first time since July 2021.

Ethereum initially held better and even rose against bitcoin when the market fist started to fall last week.

The majority of the fall was on May 11 when UST capitulated. That appears to have affected eth more than bitcoin, perhaps because UST was utilizing the eth based Curve defi pool.

It has fallen since however, down from 0.068 in the past 24 hours, suggesting it might be broader than just the one off UST event.

One potential reason may be that eth has double bitcoin’s inflation rate currently, at about 4% a year as opposed to less than 2%.

That’s a small difference that might not be noticeable in bull, but in bear, it has led to bitcoin holding off better in previous cycles..

This time however eth is to reduce issuance to near zero, with it potentially becoming deflationary based on network usage.

That’s expected this September, with yet another Merge testnet to be performed next month. Two others will follow it, and then finally they can set a block for the live launch.

This will remove the $26 million a day given to miners, bringing that to basically zero save for about 2,000 eth ($4 million) given to stakers daily.

There will be a period of circa six months when the staking reward won’t enter circulation, making eth very deflationary as circa 2,400 eth a day will be taken out of circulation through burning.

This huge change in monetary supply may re-adjust the dynamics between bitcoin and eth as for the first time ethereum will be the one with far lower inflation.

That may lead to eth holding its value far better during this cycle, but for now the market seems to be thinking otherwise, giving bitcoin a relatively higher price.